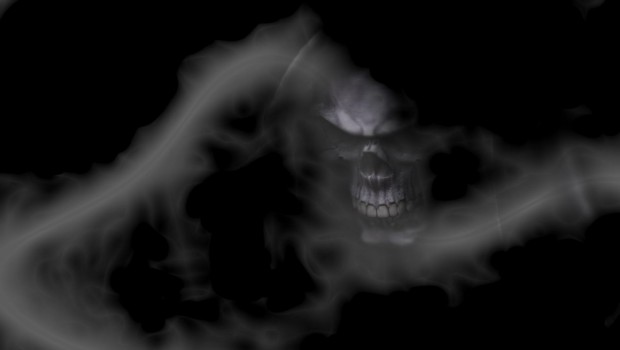 When a man dies, he is called dead, but when he again appears in a subtle form not visible to our present vision and yet acts, such a dead body is called a ghost. Ghosts are always very bad elements, always creating a fearful situation for others.

It is practically experienced. I know that the ghost, if you go in a house ghostly haunted, if you chant Hare Krsna mantra, they’ll go away. They cannot tolerate. In my life there was several incidences like that. In my household life, I was doing business in Lucknow. So there was one house, very big house, worth thousands of rupees’ rent, but it was ghostly haunted. So nobody would take that house. I took it at two hundred rupees, (laughter) and very big house. And I was… All the servants, they complained, “Sir, there is ghost.” So I was chanting. He was living in several spots, especially on the gate side. So I could understand, but I would chant Hare Krsna, and I was saved. Everyone was saved. There was… And, say, in 1969 I was guest in the house of John Lennon in London. So there was a ghost in… It was a big plot. There was a guest house. So they complained, “Sir, here is ghost.” So I advised them to chant Hare Krsna, and the ghost went away. Yes. This is fact. When there is Hare Krsna chanting, these ghostly, demonic living entities, they’ll not be able to stay there. They’ll go away. [750203BG.HAW]

Those who are very sinful and attached to their family, house, village or country do not receive a gross body made of material elements but remain in a subtle body, composed of mind, ego and intelligence. Those who live in such subtle bodies are called ghosts. This ghostly position is very painful because a ghost has intelligence, mind and ego and wants to enjoy material life, but because he doesn’t have a gross material body, he can only create disturbances for want of material satisfaction. It is the duty of family members, especially the son, to offer oblations to the demigod Aryama or to Lord Visnu. From time immemorial in India the son of a dead man goes to Gaya and, at a Visnu temple there, offers oblations for the benefit of his ghostly father. It is not that everyone’s father becomes a ghost, but the oblations of pinda are offered to the lotus feet of Lord Visnu so that if a family member happens to become a ghost, he will be favored with a gross body. However, if one is habituated to taking the prasada of Lord Visnu, there is no chance of his becoming a ghost or anything lower than a human being. In Vedic civilization there is a performance called sraddha by which food is offered with faith and devotion. If one offers oblations with faith and devotion–either to the lotus feet of Lord Visnu or to His representative in Pitrloka, Aryama–one’s forefathers will attain material bodies to enjoy whatever material enjoyment is due them. In other words, they do not have to become ghosts. [SB 4.18.18]

Because of his desire to enjoy the material world, the living entity is dressed with the material gross and subtle bodies. Thus he is given a chance to enjoy the senses. The senses are therefore the instruments for enjoying the material world; consequently the senses have been described as friends. Sometimes, because of too much sinful activity, the living entity does not get a material gross body, but hovers on the subtle platform. This is called ghostly life. Because of his not possessing a gross body, he creates a great deal of trouble in his subtle body. Thus the presence of a ghost is horrible for those who are living in the gross body. [SB 4.29.6]

Sometimes the living entity is forced to give up his body and enter another one according to the judgment of Yamaraja. It is difficult, however, for the conditioned soul to enter another body unless the present dead body is annihilated through cremation or some other means. The living being has attachment for the present body and does not want to enter another, and thus in the interim he remains a ghost. If a living being who has already left his body has been pious, Yamaraja, just to give him relief, will give him another body. Since the living being in the body of the King had some attachment to his body, he was hovering as a ghost, and therefore Yamaraja, as a special consideration, approached the lamenting relatives to instruct them personally. Yamaraja approached them as a child because a child is not restricted but is granted admittance anywhere, even to the palace of a king. Besides this, the child was speaking philosophy. People are very much interested in hearing philosophy when it is spoken by a child. [SB 7.2.36]

After giving up the body, one is transferred to another body, but sometimes, if one is too sinful, he is checked from transmigrating to another body, and thus he becomes a ghost. To save a diseased person from ghostly life, the funeral ceremony, or sraddha ceremony, as prescribed in authorized sastra, must be performed. Ravana was killed by Lord Ramacandra and was destined for hellish life, but by Lord Ramacandra’s advice, Vibhisana, Ravana’s brother, performed all the duties prescribed in relation to the dead. Thus Lord Ramacandra was kind to Ravana even after Ravana’s death. [SB 9.10.29]

We have heard of people’s being haunted by ghosts. Having no gross material body, a ghost seeks shelter of a gross body to stay in and haunt. The Sakatasura was a ghost who had taken shelter of the handcart and was looking for the opportunity to do mischief to Krsna. When Krsna kicked the cart with His small and very delicate legs, the ghost was immediately pushed down to the earth and his shelter dismantled, as already described. This was possible for Krsna because He has full potency. [SB 10.7.9]

If a man becomes disappointed and he cuts his own throat or hangs himself, some way or other, eats some poison, to finish, does it mean that he is finished? Na hanyate hanyamane sarire. He is rascal. He does not know. By finishing this body he is finished–no, that is not possible. The result is, because he violated the rules of nature, he becomes a ghost. That is his life. One who commits suicide, he becomes a ghost. Ghost means he does not get this material body. He remains in the subtle body, mind, intelligence. Therefore ghost can go because he is in the mind. Mind speed is very strong. If you have got this material body, you cannot go immediately hundred miles off. But if you are in the mental body, you can go immediately, thousand miles immediately, within a second. So the ghost, they can play something wonderful because… But they are not happy because they have no gross body. They want to enjoy. He’s materialist. He has committed suicide for some material want. So he is want of material…, fulfilling material desire. He could not fulfill in this body; therefore commits suicide, but the desire is there. The desire is there, and he cannot fulfill it. He becomes perplexed. Therefore the ghost create disturbance sometimes.

You mention ghosts. So far I have experience, the best way to remove them is to chant Hare Krishna very loudly and have jubilant kirtana until they leave. In England, on Mr. John Lennon’s house where I was staying in 1969, there was one ghost. But as soon as the devotees began chanting very loudly, he went away immediately. [71-12-03]

98 Responses to Ghosts and Spirits Are Real!