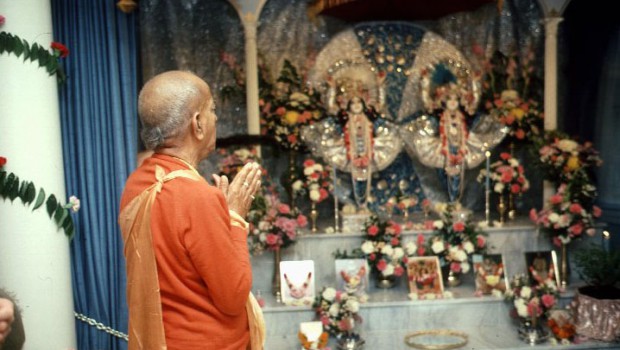 The Ten Offenses in Chanting the Hare Krishna Mantra

The answer is there is a quality to the chanting of the Hare Krishna mantra. If the chanting of Hare Krishna is done purely then the results will be very quick and very great, but if there are offenses in the chanting then the results will be very, very limited. Chanting Hare Krishna with offenses has been compared to trying to light a fire with one hand and pouring water on it with the other hand. So actually you will not be able to light the fire in this way. There will be practically no result. Only your effort will be there, but there will be no result.

At least 16 rounds a day every day without fail. Also we must strictly following the four regulative principles:

If we are thinking that we can make any advancement in Krishna consciousness without coming to the platform of chanting at 1east 16 rounds of the Hare Krishna mantra daily and strictly following the four regulative principles we are simply deluding ourselves. There is no spiritual life without following these principles, only useless sentiment.

In addition to following the four regulative principles and chanting at least 16 rounds of the Hare Krishna mantra daily we have to consider the ten offenses in regard to chanting the holy name:

The following quotes from a July 1969 letter Prabhupada wrote to his new disciples in London are typical:

“So this initiation means the preliminary chance for preparing oneself to achieve this highest perfection. I am very glad that you are already interested in the Krishna Consciousness Movement, and you will please chant at least 16 rounds daily, observing the rules and regulations.

“The four principle rules is that you will refrain from 1) meat-eating or partaking of fish or eggs, 2) illicit sexual connections, 3) intoxication (including cigarettes, coffee and tea) and 4) gambling.

“In addition to these rules there are ten offenses to chanting the Maha Mantra which should be avoided. These rules are as follows: 1) blaspheming the Lord’s devotee. 2) Considering the Lord and the demigods on the same level. 3) Neglecting the orders of the spiritual master. 4) Minimizing the authority of the Scriptures. 5) Interpreting the Holy Name of God. 6) Committing sin on the strength of chanting. 7) Instructing the glories of the Lord’s Name to the unfaithful. 8) Comparing the Holy Name with material piety. 9) Inattention while chanting the Holy Name. 10) Attachment to material things while engaged in the practice of chanting.

“So follow faithfully the above rules and regulations, help your godbrothers and sister in London to propagate Krishna Consciousness, and there is no question that you will all come out successful. I hope this will find you well.”

So you can see that coming to this platform of chanting at least 16 rounds of the Hare Krishna mantra daily and strictly following the four regulative principles is simply a prerequisite, a requirement which must be met before anyone can be initiated as a disciple in the Hare Krishna movement. And this initiation is simply the beginning. “So this initiation means the preliminary chance for preparing oneself to achieve this highest perfection.”

So Krishna consciousness is not a very cheap thing that can be had very easily. Krishna is not available to anyone very easily. Krishna can only be achieved by the mercy of His pure devotees. So there is no access to Krishna consciousness directly to Krishna. That is not the process. And Krishna will not reveal Himself to the devotee unless the devotee pleases and gets the mercy of Krishna’s pure devotees.

Therefore having a bona fide spiritual master and serving him and pleasing him and getting his mercy is essential. Otherwise there can be no advancement in Krishna consciousness. And unless the spiritual master is a pure devotee of Krishna then he has no potency to give you Krishna. He is simply a cheating rascal.

So in fact above all the rules and regulations and offenses I have mentioned the most important thing, the essential thing, which is required if you want to come to the stage of purely chanting the Hare Krishna mantra is you must have a bona fide spiritual master who is a pure devotee of Krishna. Without having a bona fide spiritual master you can chant Hare Krishna forever but you will not be able to advance because Krishna does not reveal Himself in this way. He only reveals Himself to those devotees who surrender to and serve and please His pure devotees.