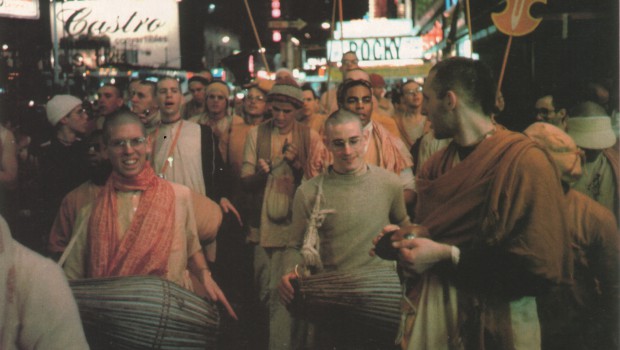 A regular harinama party has been resurrected in Times Square, New York City. The famous Time Square Harinamas of the 70’s were long ago abandoned by ISKCON despite Srila Prabhupada’s order to never stop them. These high profile harinamas were the foundation of ISKCON worldwide and our most important service to save all humanity and ourselves and to please Srila Prabhupada.

As part of the IRM’s program to revive Srila Prabhupada’s revolutionary spirit back into ISKCON, a regular harinama party has been resurrected in the most famously influential place on the planet – Times Square, New York City. The famous Time Square Harinamas of the 70’s were long ago abandoned by ISKCON despite Srila Prabhupada’s order to never stop them. These high profile harinamas were the foundation of ISKCON worldwide and our most important service to save all humanity and ourselves and to please Srila Prabhupada. Times Square area, the most powerful phantasmagoria of lights and media hype on earth has been completely renovated in the last few years.

It is safe and one of the top family attractions in the world. *** 1.5 million pedestrians *** walk through Times Square daily. The World Headquarters of the major media and entertainment networks are all here. It is unrivalled anywhere in the world in terms of its Stage theatres, Musicals and Opera. And naturally it is filled with some of the most influential people from around the world. Thus the abandonment of Harinamas in this most important of ‘hot’ spots was extremely unfortunate. Srila Prabhupada came to New York City in the beginning because he knew that the most important mission in the world had to first be introduced in the most important city in the world. Then the rest of the world would automatically follow. And Srila Prabhupada knew where in New York City we needed to make this impact.

In a letter Srila Prabhupada instructs:

“Another thing is, if we get our headquarters in the very important business quarter of New York, just like I saw those photos, big, big skyscrapers surrounding, millions of people passing daily, oh, that will be very wonderful thing. But that quarter of 77th Street, that is costly also, but it is not very important. So I think if you get one place, one skyscraper building, just by the 5th Avenue, say, around 40th Street, 45th Street, *** Times Square ***, like that, that will be the beacon-light for our world-wide propaganda of Krishna Consciousness Movement.” (Letter to Bali Mardan, 23rd December, 1972)

During the 70’s the harinamas in Times Square were huge. Devotees used to go out 200 strong in the evenings, with 100 on each side of the street. On Saturday nights they used to be out until 1AM. The upper echelons of New York Society would regularly join these great kirtans including philosophers, priests, and nuns. At this time ISKCON had prestige and strength all over the world. Unfortunately, later on ISKCON lost our renowned New York City skyscraper temple and the famous harinamas in the Theatre District at Times Square also were to stop. With this disobedience, the great foundation of our movement has crumbled, our prestige has been lost, and the rest of ISKCON wordwide has practically become deserted. Part of the process to revive the fortunes of ISKCON will therefore require such high profile harinams to be reinstituted so that the streets again begin to resound with the booming resonance of the holy name, which immediately catapults anyone who is within earshot momentarily into the transcendental realm. The IRM’s program of ‘revival’ is in this case actually literally true, for the person who leads these resurrected harinamas is the same devotee who also used to lead the famous Times Square Harinamas in the 70’s – world-famous kirtan leader Locananada Das!

These kirtans on Saturday evenings in Times Square are explosive.They usually go on for at least 2 hours during the peak Saturday night period of between 7-9 pm. The theatre crowds, the United Nations delegates and their families, tourists – indeed every one is glad to see us again. So many respond with smiles and nods and a “Hare Krishna”. Many dance by or stop to dance. Crowds gather. Flashbulbs are constantly popping. Video cameras are always aimed at the devotees from all directions at once. Pedestrians stuff dollar bills in the chanter’s hands and pockets just in appreciation of hearing the Lord’s Holy Name. Even cab drivers have stopped their cabs and thrust donations into the hands of the devotees! The Limousine chauffeurs who wait in in front of Elton John’s Broadway show standing outside their limos dance with the devotees as they march by. Indian shop owners/workers come out and greet the harinama party with folded hands and bowed heads. The kirtans are so loud that once the Police came with sound meters and told the devotees that they were 15 decibels above the legal limit! However they still continue at this rip-roaring pace. The harinam parties are always accompanied by devotees distributing books just as Srila Prabhupada wanted, and the crowds love the kirtans so much that the books just fly out of the devotees’ hands. Indeed within half an hour the book bags are normally empty.

There have been some amazing incidents. Once the party was spotted by a Policeman, who immediately started to make his way towards the party. The devotees were in anxiety thinking that they were going to either be arrested or asked to move on. But as soon as the Policeman reached the harinam, he stopped and started to sway to the rhythm, tapping his baton in tune with the beat! Another time the party was stationary in one spot for many minutes, at which point the Police did tell them to move on, but also went to the trouble of telling the party where a good spot to chant was, adding that “its a 5th amendment spot”! (Meaning that no one will be able to curtail the chanting there). Another time a mother walked by with her son and urged him to dance with the party. He slowly moved away from her, and joined the chanting for a few minutes. Holding a devotee’s hand, smiling and shyly dancing to Srila Prabhupada’s swami step, he then went back to his mom who embraced him for doing such a wonderful thing. Locananda always gestures to all to come “join & chant the Holy Name”, and once 2 members of the crowd came and joined in for 30 minutes.

Some popular comments are:

“This is great! Where have you guys been all these years?”

“I used to go to the temple on 55th st. What happened to it? We loved the food. Do you have a restaurant in Manhattan?”

One guy who remembers the devotees in the seventies being everywhere wanted to know if I had any sweetballs. Apparently they were the rage back then and everyone in New York City knew and loved the devotees because of the very wide distribution in the hundreds of thousands of this maha prasadam treat.

Sometimes you can catch the NY IRM devotees live on the internet at 45th and Broadway 7pm Saturdays on live earthcam number 3 at:

We can only end here with Srila Prabhupada’s instructions in regards to performing harinama in New York:

“I have been informed by Sriman Syamasundara of your question via telephone from New York Temple, and my reply is that this sankirtana or street chanting must go on, it is our most important program.” (Letter to Bali Mardan, 18/9/72)

“Regarding Sankirtana Parties in New York, Krishna will provide devotees, don’t be worried. Krishna can provide anything and everything within a moment but He waits to test a devotee. And when the devotee comes out successful from the test, he gives him all opportunity for devotional service. So everyone of you should go on with the Sankirtana Party and gradually Krishna will send more and more devotees to join you.” (Letter to Rsi Kumara dated 4-11-70)

Thus the moral is that the more you do harinama sankirtan, the more devotees will come. The less you do, the quicker they go away. Also the same principle which first attracted Srila Prabhupada to found ISKCON in New York is still in operation today. In order to make anything a success in this world you have to first be a success in New York City. So the IRM center in New York City is trying to make a humble attempt to restore Srila Prabhupada’s mission by again laying the ground work here like he ordered by performing Harinama sankirtan in the heart of the City. The chanters are exhilarated in a way that the devotees say is exactly the mood of the old days.

So we are inviting everyone to please join the party and experience and share in this transcendental ecstasy 7-9 pm every Saturday. It will be very easy to find – just follow the sound of the holy name!

One Response to Harinama Revived in World Famous Times Square