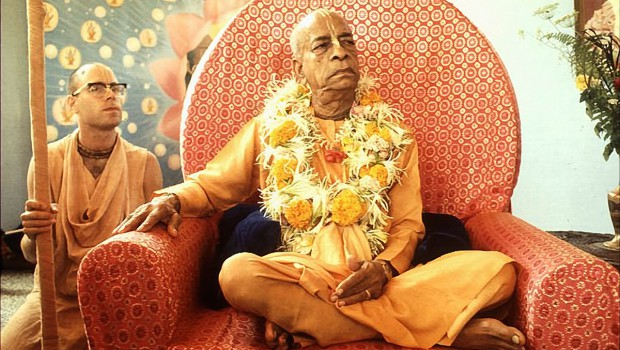 This paper shows just some of the misunderstandings or even in many cases open defiance against Srila Prabhupada. Srila Prabhupada clearly stated many times I never said that.

All Glories To Srila Prabhupada. Please accept my humble obeisances.

Below shows just some of the misunderstandings or even in many cases open defiance against Srila Prabhupada. Srila Prabhupada clearly stated many times “I never said that”.

74-05-08. Letter: Govinda
The enclosed newspaper story, “Krishna followers freed from police harassment,” is just further testimony of the great victory made by Caitanya Mahaprabhu in Chicago. I understand that the Chicago area is the most lucrative place in the world for distribution of our books and that you have done very careful work in getting all permission. Therefore this rumor that within a few years there will be police repression and people will have no more money to buy books and sankirtana will stop is completely bogus. Whoever told you that is a rascal, saying it in my name. I never said that. Rather sankirtana movement will expand, continuing so long as we are sincere.

74-08-08. Letter: Satsvarupa
Please accept my blessings. I beg to acknowledge receipt of your letter dated July 26, 1974 and your Vyasa Puja Offering. It is very encouraging that many professors have purchased books for themselves and are considering to order them for their students. I very much like this program of the standing orders. Try to increase it up to 50,000 such orders from the libraries. I have written to Bali Mardan Goswami in this connection. Regarding the remark that distributing a book to a professor is 100 times better than to a ordinary man, I never said that. I said it was very important.

74-09-25. Letter: Sukadeva
Regarding your question that if I have ever said that the Society authorities must suffer for the devotees under their protection, no, I never said that.

74-12-12. Letter: Gopijanavallabha:
Please accept my blessings. I am in due receipt of your letter dated October 27, 1974 and have also seen your letter addressed to Brahmananda Swami dated November 21, 1974. I never said that what Taitiriya was doing should be overlooked because of getting the buildings. Anyway where are the buildings? Bali Mardan says he will know who she is in the next 8 weeks, so just see he has made her pregnant twice, thrice, and he does not know who she is?

75-03-18. Letter: Hanuman
Please accept my blessings. I have received one letter from Narayana dasa, saying that he has been informed by some of your men that you are GBC there and that he must subjugate to your authority. I never said that you were the GBC there. You cannot say that.

76-09-11. Letter: Sukadeva
As far as the problems mentioned in your letter, especially the comments attributed to you, I may clearly say that I never said that.

76-10-22. Letter: Sudama
I never said that your troupe should come to Bombay for the opening. That is not very necessary.

76-10-23. Letter: Gurudasa
I never said that you should go undercover for preaching in Eastern Europe. Everything should be done openly and very carefully. Krsna will protect your efforts.

76-10-25. Letter: Vidya
In answer to your questions; 1) Tulasi is one devotee who appears wherever there is devotion to Krsna. 2) Tulasi’s body is spiritual. 3) Yes, jewelry is alright. 4) If possible. 5) Tulasi leaves should be offered to the Deity. 6) If possible. 7) Yes. 8) Yes. 9) You may cut the dead branches, but what is the necessity. 10) I never said that. 11) No. 12) Yes. 13) Use the wood for beads as far as possible, the balance may be placed within the earth. 14) I said no chemical sprays. 15) Undisturbed means what? 16) Use common sense and if you have none then consult with others. 17) No. 18) Don’t try to introduce something new. The most important thing is the love and devotion.

750513mw.per Conversations
Paramahamsa: Srila Prabhupada, I remember once I heard a tape where you told us that we should not try to read the books of previous acaryas.

Amogha: That we should not try to read Bhaktivinoda’s books or earlier books of other, all acaryas. So I was just wondering…

Prabhupada: I never said that.

Amogha: You didn’t say that? Oh.

Prabhupada: How is that?

Amogha: I thought you said that we should not read the previous acaryas’ books.

Prabhupada: No, you should read.

Prabhupada: It is misunderstanding.

Paramahamsa: I think maybe he was thinking that there was some things about some of the Gaudiya Matha books.

Paramahamsa: And sometimes you said that better not to…, better to read your books.

Amogha: When the devotees went to India this year, they said that Acyutananda Swami very…, chastised them that “You should never… If I catch any of you buying Bhaktisiddhanta’s books from Gaudiya Matha then I will take it away,” something like this.

Paramahamsa: Yeah, that was, the reason was because of, he didn’t want the devotees going to Gaudiya Matha. But there’s nothing wrong with the idea of studying the previous acaryas’ books.

Prabhupada: No. Who said? That is wrong. We are following previous acaryas. I never said that.

Paramahamsa: All of your commentaries are coming from the previous acaryas.

Jayadharma: But that wouldn’t mean that we should keep all the previous acaryas’ books and only read them.

Prabhupada: That is already there. You first of all assimilate what you have got. You simply pile up books and do not read–what is the use?

Jayadharma: First of all we must read all your books.

Mahendra: You said that to Paramahamsa Swami once.

Prabhupada: And you heard from Paramahamsa.

Mahendra: No, I was in the room. It was when he was trying to observe Caturmasya.

Prabhupada: I never said that.

Mahendra: Oh, okay, I must have heard wrong.

Prabhupada: If there is service and, on my fasting, service will be stopped, then I can take. First consideration, service. Now if somebody feels weak, he can take maha-prasada, render service.

760731rc.par Conversations
Bhagavan: The boys, they should learn how also to cook?

Prabhupada: Huh? I never said that. Why you are bringing that question? I said the girls should be. Cooking is not boy’s business. But cooking is not a very difficult art. If they want, the boys can… (coughs) There are so many, in the Bhakti-rasamrta sindhu it is stated, how Radharani was qualified. So these things should be taught to the girls. If the girls are taught to give service to the husband to the greatest satisfaction, there will be no disagreement.

75-09-02.Omk Letter: Omkara
Please accept my blessings. I have seen your letter dated August 17, 1975 and have noted the contents. I never said there should be no more marriage. By all means legally you can get married. How can I object? They misunderstand me. Unless it is there from me in writing, there are so many things that “Prabhupada said.”

I have no objection to marriage, but to bless it by a fire sacrifice, that I am thinking that if they don’t stay together, then it is not good. But if they can remain together for one year, then there can be fire sacrifice. But changing three times in a month husband and wife, that is not good.

Finally Srila Prabhupada knew these Most Dangerous “spiritual masters” and also warned this in his books:

Madhya 1.218  The Later Pastimes of Lord Sri Caitanya Mahaprabhu
Srila Narottama dasa Thakura says, chadiya vaisnava seva nistara payeche keba: unless one serves a Vaisnava, he cannot be delivered. The spiritual master initiates the disciple to deliver him, and if … two brothers, Rupa and Sanatana, who had just been initiated by the Lord. When a Vaisnava sees that another Vaisnava is a recipient of the Lord’s mercy, he becomes very happy. Vaisnavas are not envious. If a Vaisnava, by the mercy of the Lord, is empowered by Him to distribute the Lord’s … is, if they are truly Vaisnavas. One who is envious of the success of a Vaisnava is certainly not a Vaisnava himself, but an ordinary mundane man. Envy and jealousy are manifested by mundane people, not by Vaisnavas. Why should a Vaisnava be envious of another Vaisnava who is successful in spreading the holy name of the Lord? An actual Vaisnava is very pleased to accept another Vaisnava who is bestowing the Lord’s mercy. A mundane person in the dress of a Vaisnava should not be respected but rejected. This is enjoined in the sastra (upeksa). The word … or neglect those who are envious or jealous. There are many jealous people in the dress of Vaisnavas in this Krsna consciousness movement, and they should be completely neglected. There is no need to serve a jealous person who is in the dress of a Vaisnava. When Narottama dasa Thakura says chadiya vaisnava seva nistara payeche keba, he is indicating an actual Vaisnava, not an envious or jealous person in the dress of a Vaisnava.

Isopanisad 12
The pseudo religionists have neither knowledge nor detachment from material affairs, for most of them want to live in the golden shackles of material bondage under the shadow of philanthropic activities disguised as religious principles. By a false display of religious sentiments, they present a show of devotional service while indulging in all sorts of immoral activities. In this way they pass as spiritual masters and devotees of God. Such violators of religious principles have no respect for the authoritative acaryas, the holy teachers in the strict disciplic succession. They ignore the Vedic injunction acaryopasana–“One must worship the acarya”–and Krsna’s statement in the Bhagavad-gita (4.2) evam parampara-praptam, “This supreme science of God is received through the disciplic succession.” Instead, to mislead the people in general they themselves become so-called acaryas, but they do not even follow the principles of the acaryas. These rogues are the most dangerous elements in human society. Because there is no religious government, they escape punishment by the law of the state. They cannot, however, escape the law of the Supreme, who has clearly declared in the Bhagavad-gita that envious demons in the garb of religious propagandists shall be thrown into the darkest regions of hell (Bg. 16.19-20). Sri Isopanisad confirms that these pseudo religionists are heading toward the most obnoxious place in the universe after the completion of their spiritual master business, which they conduct simply for sense gratification.

In the Service of Srila Prabhupada,

One Response to “I Never Said That” — Prabhupada