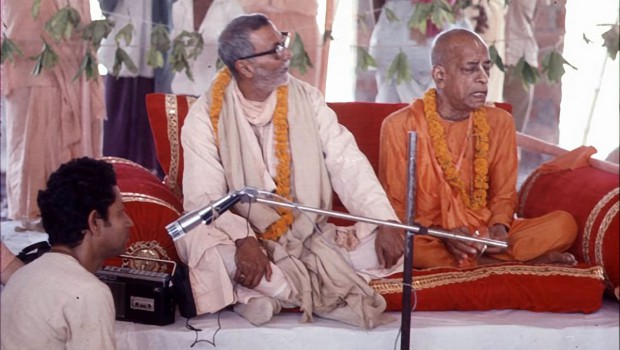 Recently the English translation of an undated Bengali conversation held between Srila Prabhupada and Narayana Maharaja (NM) has been widely circulated on the internet by the followers of NM, with the translation also provided by the NM camp. The conversation is supposed to have occurred sometime during October-November 1977, and is titled by NM’s followers as being:

They claim the conversation presents a ‘Final Order’ from Srila Prabhupada in which he:

As we will now show, Srila Prabhupada does not actually say anything of the kind, and far from the conversation being any sort of ‘Final Order’ from Srila Prabhupada, it is actually only a FALSE Order from the Gaudiya Matha group, who in their desperation to divert devotees away from Srila Prabhupada, are presenting things which are not there. We will print below the relevant portion of the transcript presented by the NM group as being the ‘evidence’ for their claim and see what it really says. (We are, of course, here relying on the accuracy of the translation from the followers of NM, which could also be incorrect.)

“[Srila Prabhupada]: YOU KINDLY INSTRUCT THEM ON THIS MATTER.”

Now this above sentence was definitely spoken by Srila Prabhupada to NM. Thus the issues are:

a) WHO was the ‘THEM’ that NM was to give this instruction to?

b) WHAT was the ‘MATTER’ on which Srila Prabhupada wanted NM to give instruction?

c) WHEN was this instruction to be given?

1) It is very clear that the ‘THEM’ refers to Srila Prabhupada’s Godbrothers who were to arrive shortly, for they are referred to as ‘THEM’ *TWICE* in the *IMMEDIATELY* preceding conversation – please see the highlighted text above. Thus, Srila Prabhupada is actually asking NM to instruct THEM – his *Godbrothers* – who will arrive shortly.

2) And what is it that he is to instruct them on? That is clear from what NM has just said before Srila Prabhupada asks him to “instruct them” – that any “cutting of the arguments” that Srila Prabhupada may have done in relation to his Godbrothers should not be taken seriously, because in a worldwide preaching mission this is insignificant, and part of caring for and preserving the mission. Srila Prabhupada had referred even earlier in the conversation to “this cutting of arguments”:

Thus we can see that how Srila Prabhupada is again now asking Narayana Maharaja to speak to his Godbrothers regarding Srila Prabhupada’s “cutting of their arguments”, and to explain how this can happen in preaching, since NM has himself now echoed the earlier words of Srila Prabhupada that “while preaching” these things “happen”.

[Srila Prabhupada]: YOU KINDLY INSTRUCT THEM ON THIS MATTER. I’M UNABLE TO SPEAK

The above points are established simply from reading the preceding conversation, and are proven from the translation of the rest of the conversation provided by the followers of NM themselves! Each of the 3 points ALONE defeats the assertion that Srila Prabhupada was giving an order to NM to instruct his disciples continuously in the future. And putting all of the 3 points together makes the conclusion crystal clear:

(even though as we have seen above, they weren’t!)

We are glad, however, that they have conceded this point, for in the same conversation later on NM himself makes some very important and instructive statements. Thus we are also justified and happy in calling these statements from Narayana Maharaja as being:

We reproduce them below:

[Narayana Maharaja] All of your duties are completed. You have fulfilled everything in your lifetime. There is no need to worry for anything. Only remember the lotus feet of Sri Radha-Krsna.
[Srila Prabhupada]: By Their blessings only.
[Narayana Maharaja]: Yes, you have done everything. Nothing is left unfinished.

Please carefully note the words – ‘EVERYTHING’ (mentioned twice), ‘ANYTHING’ and ‘NOTHING’.

And also please note that here NM definitely IS talking about Srila Prabhupada and ISKCON (unlike the false dawn heralded by the followers of NM regarding the statements of Srila Prabhupada, as seen above). Thus there is no room for doubt. NM is very clear and final here. Everything has been completed by Srila Prabhupada, and there is nothing is left to finish in regards to his ISKCON mission. Srila Prabhupada was able to complete everything in his lifetime. He did not run out of time.

*** This is Narayana Maharaja’s Final Order regarding Srila Prabhupada and ISKCON. ***

From this statement of NM, it is clear that if someone came preaching many years later that ‘Swamiji’ had NOT completed everything, that ‘Swamiji’ had ran out of time, that his mission was still unfulfilled, that this person should be consulted on how best to complete Srila Prabhupada’s mission – then I am sure that NM would be the first personality to blast such a false prophet of doom! Unfortunately, there *is* such a person who is now making these very claims, in direct contradiction to the clear and instructive Final Order of NM above. We reproduce some extracts below:

“Here, one thing is that ultimately bhakti is only uttama-bhakti. He wanted to preach all of these things in the western countries also – that which Rupa Goswami has given in the Bhakti-rasamrta-sindhu and the Ujjvala-nilamani, and that which has been written by acaryas like Raghunath das Goswami and Krishna das Kaviraja Goswami. He wanted to give all these things in western countries, BUT HE COULD NOT DO IT. HE HAD SO LITTLE TIME.” (Lecture given on the disappearance day of Srila Prabhupada, 10th November, 1992)

“But why he did? Because worldly persons, general persons, those who are not rasika vaisnavas, they don’t know tattva, they have not gone to association with any vaisnava, they think that this is a very good thing. To preach whole world the name of Krishna…and to give Gita Sandesh…is the very good thing. This was done by…you should know. So I want to say that your Prabhupada has given these things…ONLY THESE THINGS…AND NOT BEYOND THESE THINGS. Then he was only the servant of Mahavisnu, not of Krishna. A strange thing…fact…but for them who are ignorant.”

“But to dig and to sweep is not everything. To dig for basement of this big temple is not everything. So Swamiji has at first cleared the atmosphere. Prepared the ground…by preaching name and the sandesh of Gita…he prepared. So very important work … so he has done this task and it was so necessary for that world…for all world…he has done BUT HE HAS NOT DONE EVERYTHING BY DOING THAT. IT WAS ONLY BASEMENT.

And I think if he was alive …for most one or two more years more…he would completed Srimad Bhagavatam…he would completed Ujjvala. Nilamani. Bhakti-rasamrta-sindhu, Vidagdha Madhava which are necessary to know Caitanya Mahaprabhu…rasa, rasika and rasika sekhara. But…we are deprived of that…HE COULD NOT COMPLETED HIS WORK”
(Lecture given on September 19th, 1994)

It is clear therefore that these statements are in complete contradiction to the profound Final Order on ISKCON and Srila Prabhupada which has already been given by NM. Unfortunately to confuse matters, the personality making these contradictory statements also calls himself Narayana Maharaja, which does raise the possibility that all these contradictory statements are indeed made by the same personality. We, however, have discounted this possibility, since it is unthinkable that an advanced Vaisnava such as Narayana Maharaja would make such blatant contradictions, especially to a wonderfully accurate Final Order on Srila Prabhupada’s legacy. Contradictions which by the way could only serve the purpose of being nothing more than a vain attempt to try and attract followers away from Srila Prabhupada.

We would therefore urge any followers of the original Narayana Maharaja (who spoke the wonderful Final Order about Srila Prabhupada in 1977 reproduced above) to inform him that there is an imposter Narayan Maharaja on the loose preaching the preposterous speculation that Srila Prabhupada had actually not “fulfilled everything in his lifetime”. We are sure this original Narayan Maharaja will want to repremand his impersonator most severely.