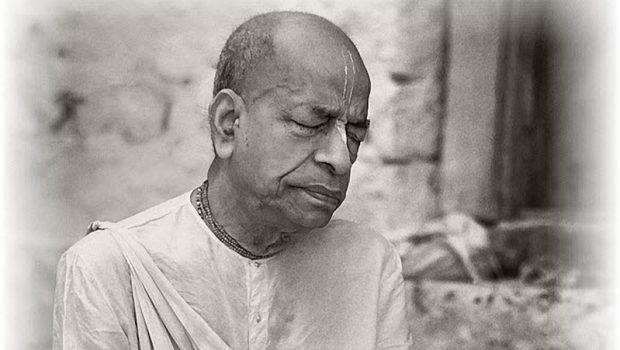 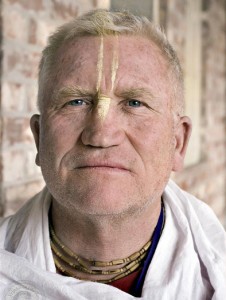 Question to Gurukripa: What happened the final months of Srila Prabhupada’s appearance in connection with the process of initiating new devotees?
Answer: Nothing happened. In the beginning Srila Prabhupada did the disksa, the yajna and the name giving. As the numbers increased, he authorized  GBC, and senior sanyassis to pick names and chant on the beads, etc.  In 1977 during the months of May, June, July 1977 I was in Vrindaban with Srila Prabhupada, giving him his massage in his bed between 1 AM and mangala aratik. During the day, many letters would arrive. Satsvarupa Swami was the secretary and we decided that only letters that would give joy to Srila Prabhupada would be read. Like numbers of books sold, etc. A maximum of five letters daily were read to Srila Prabhupada.
After some weeks like this, there were stacks and stacks of letters, all relating to initiation. Hundreds of people were panicking that Srila Prabhupada would leave the planet before they were given initiation. At this time, this situation was brought before Srila Prabhupada in his room by Satsvarupa, Tamal, myself, and maybe some others.
Up until this time it was a very simple matter that we were doing the initiations, but we first had to ask permission. Srila Prabhupada NEVER refused any recommendation from his senior men. And personally, I would sometimes argue with some GBC that they were giving it too easily. At this meeting, Srila Prabhupada basically said, “From here on, if you feel they are ready, then you may give the initiation on my behalf.” I understood this for what it was, simply extending the authority a little further than it had been. Tamal Krsna Swami, began to say, “But who will do it?. Which devotees will do this?” Srila Prabhupada said, “The nearest one will do it. Whoever is closest.” Tamal said, “Can Bhavananda do? Can Jayapataka do?” Thus these eleven names came out.

Question: Why were you not on the list of eleven?

Answer: Because it did not matter. Srila Prabhupada said whoever was closest. I was already doing and Srila Prabhupada never told me or anyone else not on the list to stop. For myself, it was not very relevant because I was working in Japan and did not have any new devotees to initiate.

Tamal Krsna Swami, made these list of names himself and Srila Prabhupada signed the letter. But they were only priests to act on behalf of Srila Prabhupada. Tamal asked about Bhavananda who was not a Temple President or a GBC at that time. And everyone new well of his homosexual tendencies. But, Tamal pushed his name, because he was already planning how to take over when Srila Prabhupada was gone.
Question: How did Tamal Krsna Swami become so influential at this time?
Gurukrpa: Tamal’s original service was as GBC in India. He left that service without permission and arrived in America. Within one year the temple presidents made a huge complaint to Srila Prabhupada that he was disrupting the temples by taking important men. I was in the room when Srila Prabhupada told Tamal to go to China. Hari Sauri’s memory of this incident is not accurate. Either way that is another story.

Tamal went to New York to prepare to go to China. And in May 1976, he showed up in a suit in Honolulu, a broken man.  He could not get a visa to China, he had no service to do in India, and he could not go back to America, so he was quite depressed. Approximately a day or two later, Srila Prabhupada called for Tamal and me at about 12:30 AM. He said, “My feet are swelling, my teeth are getting loose, I am passing urine too frequently. These are the first signs that death is coming.” Then he sent us back to bed. The next day TKG volunteered to be Srila Prabhupada’s secretary, as the service was vacant at that time. From this position he could control and manipulate the environment around Srila Prabhupada. I can write many more stories that will shock people about TKG’s ambitious nature and his desire to take Srila Prabhupada’s seat..

Question: Then how did it come about that immediately after?

Srila Prabhupada was not present physically, these eleven became worship able as paramahamsas of the highest order?
Gurukrpa: Because it is the cheaters and the cheated. People are basically sudras who want a master tell them what to do. They do not  have sufficient intelligence, or spiritual knowledge,therefore they accepted;  and the more realized devotees left , after trying to correct things. They were told to leave because they were disturbing the faith of the new disciples.
Because they could not take it any more any more they left. Now it has become like the Pol Pot regime, “accept our way, or die.” Devotees never die, KRSNA is always in their hearts.  They are the losers for losing the association of their brothers and sisters. The senior men can do something, other wise the new men cannot do without the association of the older devotees. Most of the older devotees now also do not have the missionary spirit. Srila Prabhupada said, as a group we can’t be broken, but alone we are all easily broken..
The leaders have never cared for the God Brothers/sisters. They are happy when the see their brother get victimized by Maya, and never come to try and rescue them. Do you think SP is happy to see the present leader’s disciples at his temples and not his own disciples???? They talk of love of God, but they do not care one bit for their own family members, unless the family agrees to accept everything they say. They have no peers around them that may object to anything.

I AM A VERY FALLEN SOUL. I AM NOT BASICALLY A FAULTFINDER, WHICH IS WHY I DID NOT SPEAK UP FOR THE LAST 30 YEARS. SO MANY PEOPLE ASK ME TO WRITE A BOOK, BUT I HAVE NOT. I HAVE LIVED VERY NICELY BY SRILA PRABHUPADA’S GRACE. I WILL BE VERY HAPPY TO SEE THE GBC ACTUALLY BECOME REAL GBC AND GENUINE LOVING COMPASSIONATE VAISNAVAS.

That is the end of this session. If anyone has questions, comments, they can send them and Gurukrpa can answer.
OM TAT SAT PARAM VIJAYATE SRI KRSNA SAMKIRTANAM….