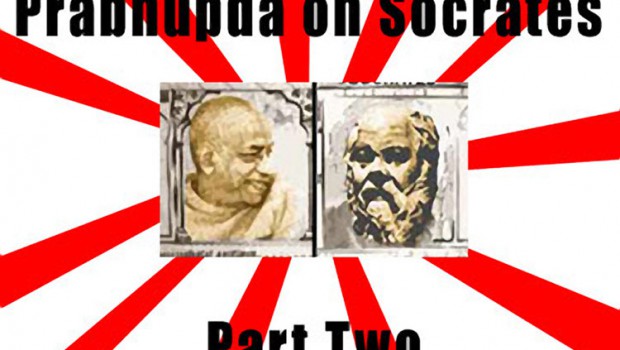 So goodness is the position where you can get knowledge. And passion and ignorance is not the platform of knowledge. Therefore the endeavor should be how to bring persons in the basic or base platform… So this is very easily done by our, this Krsna consciousness movement. If one hears about Krsna, or God, then gradually he becomes freed from the clutches of darkness and passion, and actually he then comes to the platform of goodness.

Hayagriva: One last point on Socrates. For Socrates…

Prabhupada: Now this so-called civilization is darkness. That is my point.

Prabhupada: It is not in the light. They are fighting within darkness. Just like if immediately this room become dark, everyone (indistinct). There is fighting. Stop it. You are asking me, “Prabhupada, where you are?” I say “Here,” and you are going in the other room.

Hayagriva: Well he pictures in the cave the, something like a cinema, on the wall of the cave…

Hayagriva: …and everyone is sitting in the cave looking, absorbed in the cinema, these forms that are not actual forms but are imitation forms.

Prabhupada: But that means darkness.

Prabhupada: Darkness, you are saying, “Prabhupada, I am here,” and I am looking here: “Where you are?” So that is the position of darkness. Everything you see, it is not clear. That is darkness. Therefore Vedic version is, “Don’t remain in darkness. Come to the light.” That light is guru. Ajnana-timirandhasya jnananjana-salakaya. This is guru’s description. When we are in darkness of ignorance the guru, spiritual master, ignites the torch of knowledge. Ajnana-timirandhasya jnananjana-salaka. Salakaya means torch. Then he sees, “Oh, things are like this.” In this way, when he becomes self-realized, brahma-bhu, then he becomes happy, brahma-bhutah prasannatma na socati [Bg. 18.54]. That is civilization, to get the light. And to remain in the darkness and struggle for existence, that is not civilization; that is animal life. It has no value. That is going on. Therefore we are trying to give Krsna consciousness, the greatest contribution to the human society. Krsna consciousness we are not manufacturing, we are not bluffing like other swamis and yogis and philosophers. We are simply carrying the light, torchlight, which Krsna has given. That’s all. So our business is very easy—very easy and beneficial and practical.

Hayagriva: The good that Socrates speaks of is not the same as sattva-guna. This is a quotation from The Republic. Socrates says, “This, then, which gives to the objects of knowledge their truth and to him who knows them his power of knowing is the form or essential nature of goodness.”

Hayagriva: “It is the cause of knowledge and truth, and so while he may think of it as an object of knowledge, he would do well to regard it as something beyond truth and knowledge, and precious as these both are, of still higher worth. And just as in our analogy light and vision were to be thought of like the sun, but not identical with it, so here both knowledge and truth are to be regarded as like the good, but to identify either with the good is wrong. The good must hold a yet higher place of honor. The objects of knowledge derive from the good not only their power of being known, but their very being and reality, and goodness is not the same thing as being, but even beyond being, surpassing it in dignity and power.”

Prabhupada: Yes. So goodness is the position where you can get knowledge. And passion and ignorance is not the platform of knowledge. Therefore the endeavor should be how to bring persons in the basic or base platform, ignorance and passion. So this is very easily done by our, this Krsna consciousness movement. If one hears about Krsna, or God, then gradually he becomes freed from the clutches of darkness and passion, and actually he then comes to the platform of goodness. And when he is perfectly in goodness, then this passion and ignorance and their by-products cannot touch him.

If we hear Bhagavatam, Bhagavad-gita regularly, then we become free from the effects of the modes of ignorance and passion, gradually, although it takes… But it is sure. The more you hear about Krsna, or—Krsna means His instruction or about Him, what He is—the more you become purified. So that is the test, that how one has become purified means one is purified from the base quality of passion and ignorance, means that he is no more attacked by greediness and passion. That is the test. That means he is free from the base qualities, and he is situated, ceta etair anaviddham sthitam sattve prasidati. When he is no more disturbed by these base qualities of passion and greediness, then he is happy. Then he becomes happy. Ceta etair anavi…, sthitasya, that is goodness. That is goodness. Then he is happy, happiness, that the ultimate stage of goodness is brahma-bhutah, to realize himself, realize God. So goodness, one must come to the platform of goodness. So we are therefore asking people to give up these base qualitative activities—illicit sex and meat-eating and drinking or intoxication and gambling. These are base qualities. So anyone gives up these qualities, he remains in the sattva-guna. And then if he is promoted farther, just like Socrates said that goodness is not all, that still you have to…, and that is bhakti. Then his realization is perfect. He becomes liberated, and then gradually he develops love of God, then he is in the original state. Bhaktir hitva anyatha. As mukti, liberation, means that to be free from this all nonsense engagements. Nitya-baddha, they are engaged, all these karmis, jnanis, yogis, they are simply engaged in some false engagements to become happy. So when one is free from these false engagements, then he is in the liberated state. Mukti means muktir hitva anyatha rupam. Anyatha rupam means he is acting otherwise. So one has to come to the real position, not work, act otherwise. So he is eternal servant of Krsna. When he fully engage himself in the service of Krsna, then he is liberated, and if he keeps himself, then nobody can touch, the maya cannot touch. Daivi hy esa gunamayi mama maya [Bg. 7.14]. Maya is very strong, but if one keeps in touch with Krsna constantly, maya has no jurisdiction. Mayam etam taranti te. This is perfection of life.

Hayagriva: Transcendental to the modes.

Prabhupada: Yes. No more affected by the modes of material nature. Sa gunan samatityaitan brahma-bhuyaya kalpate [Bg. 14.26]. Such person is transcendental to the modes of material nature. Sa gunan samatityaitan brahma [Bg. 14.26]. That is brahma-bhutah stage. So every devotee, if he is strictly following the rules and regulation, he is in the brahma-bhutah stage. Just like there is epidemic, but one who has taken the vaccine, the epidemic cannot touch it. So that is like that. Brahma, when you come to the brahma-bhutah state, let…, there may be maya, there may be so many activities of ignorance and passion—he has nothing to do with. He is free. That is brahma-bhutah state. That is wanted. That is perfection.

Hayagriva: So that’s the conclusion of the additional notes on Socrates, Srila Prabhupada.

Hayagriva: And if new philosophers that we will present eventually, oh, um, I don’t know if these were ever…

Prabhupada: Actually the main philosophy is Socrates. He is (indistinct).

Hayagriva: Socrates, Plato, Aristotle, these have been done. Just a little, a few additions. But then there’s Plotinus, Origen, and Augustine, and these were the three philosophers who shaped Christian thought or Catholic, the Church thought, Church fathers, and St. Anselm, St. Thomas Aquinas, Scotus and Eckhart, these are Christian…
Prabhupada: So they are not philosopher; they are Christian with different point of views. So we are not going to discuss with a person he is from the stand…, deviating from the standard way and thinking in their mental speculation.

Hayagriva: But these, these are considered philosophers…

Prabhupada: Considered, but because they belong to a certain sect of religion…
Hayagriva: Because they are followers of Christ?
Prabhupada: Yes. And they are deviating from the original Christian father, so they are useless.

Hayagriva: They do, they do deviate. They…

Prabhupada: No, you can not deviate. Then no more you are Christian. So you can…, you have no platform to talk from the Christianity. Therefore they should be rejected.

Hayagriva: Uh huh. So Plotinus was not Christian, neither was Origen…

Prabhupada: If you say Christian, you must follow the four…, ten commandments of Christ. If you don’t follow, you make your own ways to escape, then you are no longer Christian. So you cannot talk.
Hayagriva: But Augustine was one of the ones who maintained that animals do not have souls.

Prabhupada: Therefore he is a rascal.

Prabhupada: He is a rascal.

Hayagriva: And this was accepted…

Prabhupada: Now, what do you, what do you use, what the use to talking with a rascal? It is waste of time. (end)

Prabhupada on Socrates Part One →