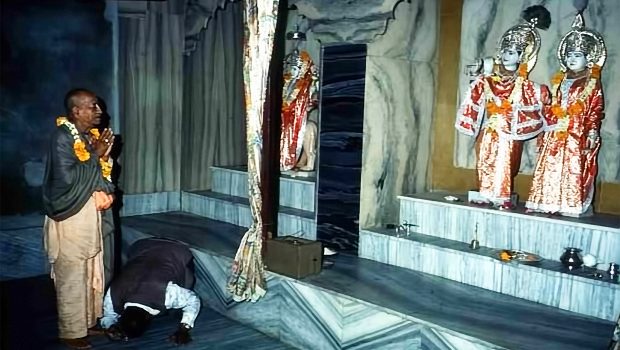 I am confussed by the state of affairs, today, when leading godbrothers are trying to replace the position of my only beloved spiritural master? Are we so quickly enlinghtened, that we can replace a great acharaya. It’s Mayas illusion.

Please accept my humble obesiences, all glories to Srila Prabhupada! I have been disasociated form the devotees since Srila Prabhupada’s dissapperence. For no reason other than I could not tolerate seeing my godbrothers picturtures on the Vyasasaan. I thought it was due to my envious nature, and the fact that my initiated name was Vyasasasana dasa, and that I thought that my mission in life was to serve Srila Prabhupada’s lotus feet. I never expected it to be otherwise.

I am confussed by the state of affairs, today, when leading godbrothers are trying to replace the position of my only beloved spiritural master? Are we so quickly enlinghtened, that we can replace a great acharaya. Its Mayas illusion. I remember when I was a new bhakta, and I had the association of elder godbrothers, like Jayananda, and Visnujana Swami, and Tamal Khrishna Goswami, I never had reason to suspect that someday, His Divine Grace A.C. Bhaktivedenta Swami would someday be repalced. Has Krishna been Replaced? Has Lord Caitanyya Mahapraphu been replaced? No! Do we need a new guru? I think not. But, this is just my humble oberservation. I have no status in ISKCON, no power, no disciples, and no tape ministry. But I have my faith, in Guru, Shastra, and the assosiation of saintly persons. I live outside ISKCON but keep the faith alive within my heart. And I know more about true humility now than I would have if I remained. I have been able to retain my self respect, and respect for my godbrothers, and my beloved Guru Maharaja.

All Glories To Srila Prabhupada!