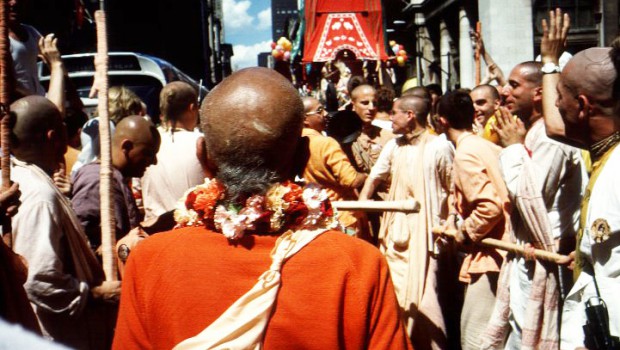 It is not our business to change, simply to receive the knowledge from Srila Prabhupada and distribute the same knowledge, without adding or subtracting anything, to the people we meet.

The spiritual master is the person whose mercy extinguishes the forest fire of the material world. He is the one who has the potency of awakening the dormant spark of Krishna consciousness within our hearts. He is the one who knows the art of engaging his disciples in pure devotional service. He is the one who can fan that little spark and make it into a blazing fire.

In my case that Spiritual Master is His Divine Grace A.C. Bhaktivedanta Swami Prabhupada. He has been guiding me at every step for the past 18 years. He is the one who convinced me that Krishna is the Supreme Personality of Godhead and that so-called pleasure in the material world is simply an interaction of the senses with their objects and is on the bodily platform and can never give us satisfaction. He is the one who convinced me that I am not this material body, but that I am the eternal spiritual soul within the body. He let me know that I am covered now by the gross and subtle material bodies and he also showed me how I can uncover my original Krishna consciousness by chanting the Hare Krishna mantra, following the regulative principles and engaging in devotional service. He has convinced me that my eternal occupation is to be engaged in the devotional service of Krishna.

There is no question whatsoever that Srila Prabhupada picked me up from drowning in the ocean of the material energy and gave me a glimpse of the spiritual world and has given me everything I need to make my journey back home, back to Godhead. And at every step he is inspiring me, he is encouraging me and when I go astray he is bringing me back onto the right path.

Of course I also owe a great debt to many devotees who are my siksa gurus and who have helped me in so many ways. But Srila Prabhupada stands supreme, miles above anyone else. He is the guiding light in an otherwise very dark world.

I can never repay the debt to my spiritual master, Srila Prabhupada, however I can try to surrender to him and serve him and follow his instructions.

I can not think of anything more offensive, or more insulting to Srila Prabhupada than to say he is not my guru and I am still looking for a guru.

Prabhupada has already saved me, he has already initiated me into the chanting of the Hare Krishna mantra and at every moment over the past eighteen years he is guiding me, answering my questions and giving me more and more inspiration to serve Krishna. So I will never reject my eternal spiritual master, His Divine Grace A.C. Bhaktivedanta Swami Prabhupada.

Until ISKCON realizes that Srila Prabhupada is not dead, that he is very much alive in his books and in the hearts of his sincere followers, that he is still preaching, and still initiating new people into Krishna consciousness, there will only be chaos.

“He reasons ill that Vaisnavas die when thou art living still in sound. The Vaisnava dies to live, and living spreads the holy name around.”

9 Responses to Some of ISKCON’s Blind Spots