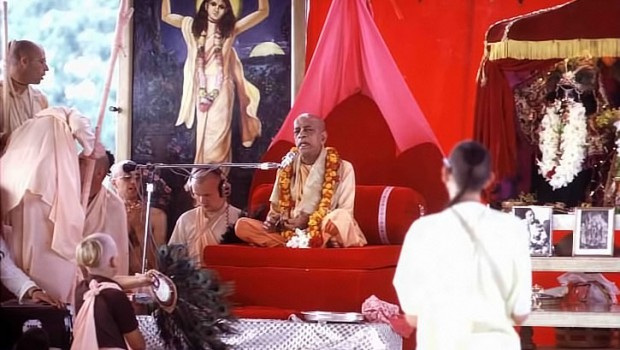 So every one of us, those who have come to this Krsna consciousness movement, expected to preach in the future and to become a spiritual master also in the future. But first of all you must spiritualize yourself; otherwise it is useless.

Prabhupada: Feeling all right?
Devotees: Jaya!
Prabhupada: Hare Krsna. Mantra?
Pradyumna: Om namo bhaga…
Prabhupada: Not this. First of all Isopanisad. Yes. Isopanisad. (devotees and Prabhupada chant together Invocation and first two mantras of Isopanisad) That’s all. That’s all. Hare Krsna. Now om namo bhagavate, chant.
Devotees: Om namo bhagavate vasudevaya.
Prabhupada: Yes? (Prabhupada leads devotees in chanting SB 2.1.1-5)
Prabhupada: Again from the beginning, om namo bhagavate vasudevaya. (devotees chant slokas in unison. Prabhupada corrects them in third verse) So Gargamuni, you can read where you left yesterday.
Gargamuni: Page one. “Similarly, in the Second Canto, the post-creation cosmic manifestation is described. The different planetary systems are described in the Second Canto as different parts of the universal body of the Lord. For this reason, the Second Canto can be called “The Cosmic Manifestation.” There are ten chapters in the Second Canto, and in these ten chapters the purpose of Srimad-Bhagavatam and the different symptoms of this purpose are narrated. In the first chapter the glories of chanting are described and the process of meditation on the universal form of the Lord by the neophyte devotees is hinted. In the first verse Sukadeva Gosvami replies to the questions of Maharaja Pariksit, who asked him about one’s duty at the point of his death. Maharaja Pariksit was glad to receive Sukadeva Gosvami and he was proud of being a descendant of Arjuna, the intimate friend of Krsna. Personally, he was very humble and meek, but he expressed his gladness that Lord Krsna was very kind to the sons of Pandu, or his grandfathers, especially his own grandfather Arjuna. And because Lord Krsna is always pleased with His family, therefore at the verge of Maharaja Pariksit’s death, Sukadeva Gosvami was sent to help him in the process of self-realization.”
Prabhupada: This is confirming the statement of Caitanya-caritamrta, that guru-krsna-krpaya paya bhakti-lata-bija [Cc. Madhya 19.151]. Two things required, Guru and Krsna, to advance in the spiritual realization or Krsna consciousness. So here it is, Krsna is pleased in the family of the Pandavas. So Pariksit Maharaja was going to die. Pariksit Maharaja was grandson of Arjuna, and he was also a devotee. So therefore by the mercy of Krsna, a bona fide spiritual master is sent to Pariksit Maharaja. Guru-Krsna. When one is sincere, then Krsna is sitting within everyone. As soon as He sees that “Here is a sincere soul. He’s seeking after Me,” so He manifests Himself out externally as spiritual master. The spiritual master is therefore representative of Krsna. Guru-krsna-krpaya paya bhakti-lata-bija [Cc. Madhya 19.151]. Two things. Without being representative of Krsna, nobody can become spiritual master. Krsna-sakti vina nahe tara pravartana. Without being empowered by Krsna, nobody can preach, nobody can become a spiritual master.

So here Sukadeva Gosvami sent by Krsna on the verge of his death. Guru-krsna-krpaya paya bhakti-lata-bija [Cc. Madhya 19.151]. Ei rupe brahmanda bhramite kona bhagyavan jiva [Cc. Madhya 19.151]. This opportunity is obtained by a very fortunate person. Because the living entities are wandering within this universe, packed up, from one planet to another, from one species life to another species of life. In this way, he is wandering. He is not fixed up. Today I am American or Indian, tomorrow or next birth, I do not know what is going to happen to me. But this body for good will be finished. I’ll never get this body. I’ll get another body. Maybe a demigod’s body or a tree’s body or a plant’s body or animal’s body—I must get another body. So the living entity is wandering in this way, vasamsi jirnani. Just like we change our dress from one dress to another, similarly we are changing different positions by the influence of maya. Maya is forcing me. Prakrteh kriyamanani gunaih karmani [Bg. 3.27]. As soon as I am desiring something, immediately my body is formed. Immediately a particular type of body begins to form, and as soon as I am mature to change, my next body I get according to my desire. Therefore we should always desire Krsna. Then from this life, the Krsna-approaching body or the spiritual body will be formed. The more you become sincere servant of Krsna, the more your body becomes Krsna-ized, electrified. Therefore advanced Krsna conscious person is considered to have a spiritual body. The same example, as I have given several times: just like iron rod. You put into the fire, it becomes warmer, warmer. The more it is connected with fire, it becomes warm, warm, warm. And at last it becomes red hot, so that at that time, if that iron is touched to any other thing, it burns. It does not act as iron; it acts as fire. Similarly, by this Krsna consciousness, continuous chanting, you will make your body spiritualized. At that time, wherever you go, wherever you touch, he’ll be spiritualized. Similarly, the iron… Without being spiritualized, without being red hot, if you touch, it will not act.

So every one of us, those who have come to this Krsna consciousness movement, expected to preach in the future and to become a spiritual master also in the future. But first of all you must spiritualize yourself; otherwise it is useless. So krsna-sakti vina nahe. Without… Just like without being red hot, you cannot burn any other thing. Similarly, without being fully spiritualized, you cannot make others spiritualized. Therefore we have to follow the parampara system. The disciplic succession, as we get the knowledge, as we get the power, as we get the instruction, so we have to follow. That will help me to spiritualize myself. And when you are spiritualized… You’ll have to wait for that time. Then, wherever you will preach, the result will be there.

So by the grace of Lord Krsna, Sukadeva Gosvami has reached Pariksit Maharaja. Therefore at the verge of Maharaja Pariksit’s death, Sukadeva Gosvami was sent to help him in the process of self-realization. Without spiritual master’s help, nobody can become self-realized. Our Vaisnava philosophy does not allow that you shall become self-realized by your own endeavor. Just like other schools, they think, Buddha school, that by meditation… I do not know whether in Buddha school the spiritual master is accepted. But our Vaisnava school, without acceptance of spiritual master, there is no possibility of self-realization. Guru-krsna-krpaya paya bhakti-lata-bija [Cc. Madhya 19.151]. Then, (reading) “Maharaja Pariksit was a devotee of Lord Krsna from his childhood, so he had natural affection for Krsna, and Sukadeva Gosvami could understand his devotion to Lord Krsna. Therefore he welcomed the question about his duty because the king hinted that worship of Lord Krsna is the ultimate function of every living entity. Sukadeva Gosvami welcomed this suggestion and said, ‘Because you have raised the question about Krsna, your question is most glorious.’ ” The next sloka is variyan esa te prasnah [SB 2.1.1]. Sukadeva Gosvami welcomed the prasna, the question about Krsna, and that we shall discuss next day.
Thank you very much. (end)

One Response to Become Spiritual Master but Spiritualize Yourself First!