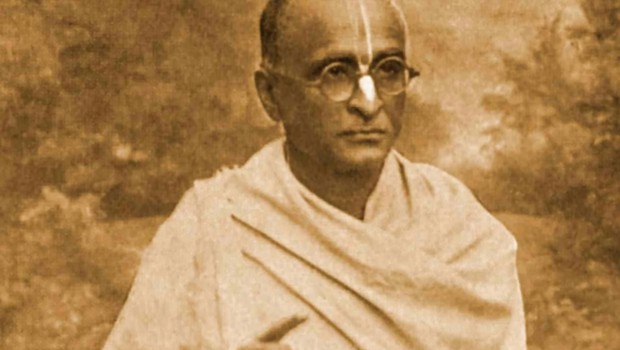 Although this is the disappearance day of Om Visnupada Sri Srimad Bhaktisiddhanta Sarasvati Thakura, so there is nothing to be lamented. Although we feel separation, that feeling is there, but spiritually, there is no difference between appearance and disappearance. There is a song, Narottama dasa Thakura’s song, ye anilo prema-dhana. Do you know, any one of you? Can you sing that song anyone?

Bhaktisiddhanta Sarasvati Thakura passed away from this material world on 31st December, 1936. So almost forty years past. So there are two phases, prakata and aprakata, appearance and disappearance. So we have nothing to lament on account of disappearance because Krsna and Krsna’s devotee… Not only devotees, even the nondevotees, nobody disappears. Nobody disappears because every living entity… As Krsna is eternal… It is confirmed in the Vedic literature, nityo nityanam cetanas cetananam. The description of the Supreme Lord is that He is also nitya, eternal, and the living entities are also eternal. But He is the chief eternal. Nityo nityanam cetanas cetananam. So qualitatively, there is no difference between Krsna and the living entities. And quantitatively, there is difference. What is the difference between nitya, the singular number nitya, and the plural number nitya? The plural number nitya is subordinate, eternal servants of the singular number nitya. Just like if you want to serve somebody, so the master is also exactly like you. He has got two hands, two legs, or the same sentiments. He also eats. Everything is same there. But the difference is the master and the servant. That’s all. Otherwise, equal in every respect.

So spiritually, appearance and disappearance, there is no difference. Just like in material point of view, if a person takes birth… Suppose you get a son born, you become very happy. The same son, when passes away, you become very unhappy. This is material. And spiritually, there is no such difference, appearance or disappearance. So although this is the disappearance day of Om Visnupada Sri Srimad Bhaktisiddhanta Sarasvati Thakura, so there is nothing to be lamented. Although we feel separation, that feeling is there, but spiritually, there is no difference between appearance and disappearance. There is a song, Narottama dasa Thakura’s song, ye anilo prema-dhana. Do you know, any one of you? Can you sing that song anyone? Oh. Ye anilo prema-dhana, karuna pracura, heno prabhu kotha gelo. I don’t remember exactly the whole song. That is our lamentation, that Srila Bhaktisiddhanta Sarasvati Thakura brought this message to distribute all over… Of course, Sri Caitanya Mahaprabhu expressed His desire, that

He wanted that His name should be broadcast all over the world in every town and village. And who would do it? That He asked that anyone who has taken birth in Bharata-varsa, India, it is his duty: first of all make himself perfect by understanding the philosophy of Sri Caitanya Mahaprabhu; then broadcast it, distribute it. This was the duty of every Indian. 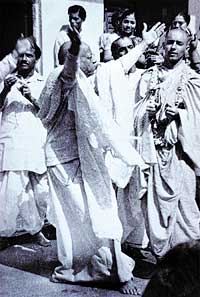 So Indian, especially in India, they have got the privilege to take advantage of the Vedic literature. In other countries there is no such advantage. So if anyone wants to make his life perfect, then he has to take advantage of the vast treasure-house of Indian spiritual knowledge. Even one Chinese gentleman, he has written one book about religion. That is a course in New York University. So he has said that “If you want to know something of religion, then you have to go to India.” That’s a fact. So Caitanya Mahaprabhu said that every Indian… There is need of broadcasting this Krsna consciousness movement, all over the world. So it is the duty of every Indian to first of all make his life perfect. He must know… Perfection means he must know what is his position and what he has to do. That is perfection. At the present moment, people do not know what he is even, whether he is this body or something extra. The big, big scientists, they are also failure. This is perfection. First of all one must know what he is, whether he is this body or something beyond this body. This is the beginning of spiritual knowledge. So that advantage is there in India, by culture, by education. Therefore Sri Caitanya Mahaprabhu requested that Indians, bharatiya, Bharata- varsa, those who have taken birth as human being… He doesn’t speak to the animals. Bharata bhumite manusya janma. Manusya janma means human being. Because without being a human being, nobody can understand these things. The cats and dogs, they cannot understand. So a person whose behavior is like cats and dogs, he also cannot understand. Therefore He said, janma sarthaka kari. First of all make your life perfect and then distribute this knowledge. This is the Caitanya Mahaprabhu’s mission.

So when I met Bhaktisiddhanta Sarasvati Thakura… It is a long story, how I met him. One of my friends, he dragged me. (laughing) (laughter) I was at that time nationalist and manager in a big chemical factory. My age was about twenty-four years. So one of my friends, he asked me that “There is a nice sadhu, Bhaktisiddhanta Sarasvati Thakura. He has come in Calcutta. So let us go and see.” So I was reluctant. I thought just like so, there are so many sadhus. So I was not very much… Because I had very bad experience, not very good. So I said, “Oh these kind of sadhus, there are many.” You’ll be glad to know that even my in young age or early age or early age–it was Krsna’s grace–even amongst my young friends, I was considered the leader. (laughing) (laughter) In my school days, in my college days, in my private friendship, some way or other I became their leader. And one astrologer sometimes he read my hand. He said in Hindi, kukum calena(?). Kukum calena means “Your hand speaks that your order will be executed.”

Prabhupada: So anyway, it was Krsna’s grace. I would not go, but their point of view was that unless I certify that sadhu, Bhaktisiddhanta Sarasvati Thakura, he’ll not be accepted. Therefore he dragged me. So I went to see Bhaktisiddhanta Sarasvati Thakura on that day. On the first meeting, just we offer our obeisances. It is the practice. So immediately he began his talking that “You are all educated young men. Why don’t you take up Sri Caitanya Mahaprabhu’s cult and preach all over the English knowing public? Why don’t you take up this matter?” So I argued with him in so many… At that time I was nationalist. So I told that “Who will accept our message? We are dependent nation. Nobody will care.” In this way, in my own way, in these younger days… But we belonged to the Vaisnava family, Sri Caitanya Mahaprabhu, Nityananda, Radha-Govinda. That is our worshipable Deity. So I was very glad that “Radha-Krsna cult, Caitanya Mahaprabhu’s cult, this sadhu is trying to preach. It is very nice.”

So at that time we had some talks, and of course I was defeated by his argument, my argument. (laughter) And then, when we came out, we were offered prasadam, very nice treatment, the Gaudiya Matha. And when I came out on the street, this my friend asked me, “What is your opinion of this sadhu?” Then I said that “Here is the right person who has taken up Sri Caitanya Mahaprabhu’s message, and now it will be distributed.”

Prabhupada: So I was at that time a fool, but I opined like this. And I accepted him as my spiritual master immediately. Not officially, but in my heart. That was in 1922. Then, in 1923, I left Calcutta on my business tour. And I made my headquarter at Allahabad. Allahabad is about five hundred miles from Calcutta. So I was thinking that “I met a very nice saintly person.” That was my thinking always. So in this way, in 1928, there was a Kumbhamela. At that time, these Gaudiya Matha people came to Allahabad to establish a center there, and somebody else said, somebody informed them that “You go to that Prayaga Pharmacy.” My drug shop was named as Prayaga Pharmacy. My name was also there. “You go and see Abhaya Babu. He is religiously… He will help you.” These Gaudiya Matha people, they came to see me. So “Sir, we have come to you. We have heard your good name. So we want to start a temple here. Please try to help us.” And because I was thinking of these Gaudiya Matha people that “I met a very nice, saintly persons,” and as soon as I saw them, I was very much engladdened: “Oh, here are these persons. They have come again.”

So in this way, gradually, I became attached to these Gaudiya Matha activities, and by the grace of Krsna, my business also was not going very well. (laughter) (laughs) Yes. Krsna says yasyaham anughrnami harisye tad-dhanam sanaih. If somebody wants to be actually devotee of Krsna, at the same time, keeps his material attachment, then Krsna’s business is He takes away everything material, so that cent percent he becomes, I mean to say, dependent on Krsna. So that actually happened to my life. I was obliged to come to this movement to take up this very seriously. And I was dreaming that “Bhaktisiddhanta Sarasvati Thakura is calling me, ‘Please come out with me!’ ” (pause) So I was sometimes horrified, “Oh, what is this? I have give up my family life? Bhaktisiddhanta Sarasvati Thakura is calling me? I have to take sannyasa?” Oh, I was horrified. But I saw several times, calling me. So anyway, it is by his grace I was forced to give up my family life, my so-called business life. And he brought me some way or other in preaching his gospel.

So this is memorable day. What he desired, I am trying little bit, and you are all helping me. So I have to thank you more. You are actually representative of my Guru Maharaja (Srila Prabhupada starts to cry) because you are helping me in executing the order of my Guru Maharaja.