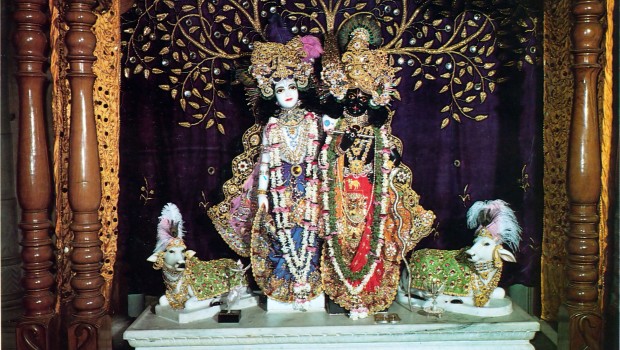 Shrinivas Acarya is one of the most important acaryas in the generation immediately following Caitanya Mahaprabhu. He was an illustrious disciple of Gopal Bhatta Goswami and Jiva Goswami. His achievements include leading the very first book distribution party in the history of Gaudiya Vaishnavism; converting a king and his entire kingdom to the Vaishnava religion, originating the Manohar Shoy style of kirtana, developing elaborate techniques of Manjari-sadhana and co-organizing the first

In a small village of Chakhandi lived a pious Brahman names Gangadhar Bhattacharya and his wife Lakshmi-priya. Both were great devotees of Caitanya Mahaprabhu and Gangadhar was fortunate to witness the sannyasa ceremony of Mahaprabhu in Katwa. He returned filled with such love for Mahaprabhu that the villagers renamed him Caitanya Das. Later the childless couple traveled to Puri to serve Mahaprabhu, and here they received a benediction from Him to soon expect the birth of a great personality. Thus blessed, in the first decade of 1500, Shrinivas was born.

Shrinivas grew up to be the brightest, most beautiful and beloved boy of Chakhandi. He studied under the famed Dhananjaya Vidyavachaspati, who would later admit that there was nothing he could teach Shrinivas, “since the boy already knows more than I can ever hope to learn”. Due to his fame, Shrinivas came in contact with Narahari Sarakar, an intimate associate and devotee of Mahaprabhu. He accepted Narahari as an instructing guru and later approached him for initiation. Narahari however declined saying that it was Mahaprabhu’s will that he be initiated by Gopal Bhatta Goswami in Vrindavana. He also instructed Shrinivas to meet Mahaprabhu in Puri. On reaching Puri, he took shelter of Gadadhara Pandit, since Lord Chaitanya had already left the planet, to study the Bhagavatam under him. However the only copy of Bhagavatam in Puri had been rendered ineligible by the tears of ecstasy that Mahaprabhu and Gadadhara had shed while reading it. So Shrinivas returned to Bengal to procure the only other copy from Narahari. However by the time he returned, Gadadhara Pandit, unable to bear the separation with His Lord any more had also left the planet.

Sanatana Goswami sent Srinivas instructions by Narahari to come to Vrindavana and study under him. Shrinivas set out for Vrindavana. As was customary, Shrinivas traveled slowly visiting all the holy places of pilgrimage and associating with advanced devotees on the way. However on the way to Vrindavana, he was once again heart broken to hear that both Rupa and Sanatana Goswami had left the planet. In great depression, a completely bewildered Shrinivas contemplated giving up his life. However by the mercy of Rupa and Sanatana Goswami, he understood by divine vision that he was intended to serve under Gopal Bhatta and Jiva Goswami.

In Vrindavana, Shrinivas was warmly greeting by Gopal Bhatta and Jiva Goswami. Here he was instructed by these two luminaries and accepted as a disciple by Gopal Bhatta Goswami. Soon two other personalities who would be as famous and important as Shrinivas appeared in Vrindavana. They were Narottama Das Thakur and Shyamananda Prabhu. The three soon became close friends and studied the scriptures under the greatest master of the time, Jiva Goswami. They also studied the Vrindavan forests in association with Raghava Pandit, said to be an incarnation of Dhanistha, an intimate gopi associate of Krishna in Braja lila.

After having sufficiently being trained the three devotees were now ready for the next phase, which would become their life mission. While Caitanya Mahaprabhu had inundated the world with Krishna prema, the six Goswamis had captured that in their writings and Shrinivas with Narottama and Shyamanada were now going to distribute this love of Godhead. In a ceremony, Jiva Goswami named Shrinivas as Shrinivas Acharya. He entrusted all the original writing of the six Goswamis in a big trunk and the three devotees started on their journey to Gauda desa (Bengal) with ten guards and two cart drivers. Thus began the first travelling sankirtan party.

Enroute the procession passed through Gopalpur in the kingdom of Vana Vishnupur, belonging to the powerful Malla dynasty. However its king, Birhambhir also patronized a band of dacoits who would routinely plunder people travelling through their kingdom. They had been following the book laden cart for some time, thinking it to be a priceless treasure. One night while the exhausted travelers slept, the trunk was stolen. One can only imagine the sorry plight of Shrinivas Acharya and his companions when they discovered the theft. However as devotees, they were fixed in their service, and Shrinivas Acharya advised Narottam Thakur and Shyamananda Pandit to continue with their mission while he would stay and try to recover the books.

Uplifting the king and kingdom

King Birhambhir was extremely initially disappointed at discovering holy writings in the trunk when he was expecting gold and diamonds. However it is said that just by touching these books, the Srimad Bhagavatam and Sri Chaitanya Caritamrita, he felt spiritually charged and was filled with remorse at the sin he had committed. One day he dreamt of a holy man consoling him and assuring him that he would come and get the books. A few days later Shrinivas Acharya came to his court and heard a professional reciter chanting the Srimad Bhagavatam. After two weeks of superficial recitations, Shrinivas Acharya humbly submitted that there were deeper aspects to the scripture. On being challenged, he began reciting the Srimad Bhagavatam, explaining with great depth the verses and their connotations. The entire court, the king and even the previous reciter became transcendentally blissful at hearing the Bhagavatam from such a pure devotee. The king recognizing Shrinivas Acharya as the person from his dreams and surrendered to him. He returned the priceless books and the Chaitanya Caritamrita which was on the bottom of the trunk was then on the top, showing that the cream of Sri Chaitanya Caritamrita came to the top. King Birhambhir became a Vaishnava. Eventually his entire kingdom became a flourishing center of Vaishnavism.

Shrinivas Acharya then resided for some time in Jajigram, serving his old mother and according to her desire he got married. He continued preaching strongly and initiated 117 disciples. His most confidential disciple, Ramchandra Kaviraj, was inseparable from him and would later become a prominent preacher. After some time Shrinivas Acharya went back to Vrindavana where he was greeted by Jiva Goswami and Gopala Bhatta Goswami. He received many instructions from his gurus and developed a deep relationship with Shyamananda Pandit also. He returned to visit Vishnupur which by now had become a completely Vaishnava state by practicing the Vedic lifestyle. Later he returned to Jajigram to continue his missionary work.

In time Shrinivas Acharya became more and more absorbed in Krishna bhakti and would many times go into deep meditation, completely loosing external body consciousness. In these meditations (manasa seva), Shrinivas Acharya would participate in the eternal spiritual pastimes of His lord and some time return carrying symptoms of these. The Bhakti-ratnakara relates how once while meditating on serving Caitanya Mahaprabhu, he received a garland of flowers from the Lord, and awoke to find a fragrant garland around his neck. In another instance while meditating on the water pastimes of the Divine Couple, he remained in trance for several days, until his disciple Ramchandra Kaviraj, by his mystic powers entered into his trance and brought him back. However as a pure devotee, Shrinivas Acharya kept his intimate relationship with his Lord a secret and would reveal it only to his most confidential associates.

Shrinivas Acharya composed five lyrical works called “padas” found in the Karnananda. He wrote an excellent commentary on the catursloki (four original slokas of the Srimad Bhagavatam) which is widely read to this day. He also composed the popularly recited Shat-Goswami ashtakam, eight prayers to the six Goswamis. His passing away is not documented by his loving disciples who preferred to remember the exemplary life of this great devotee. Shrinivas Acharya is regarded as the perfect symbol of Gaura-sakti, the love of Caitanya Mahaprabhu, abundantly expressed in his preaching, his writings and his life.

What Can Turn a Greyhound Bus into a Temple? → 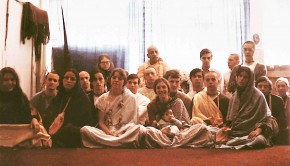