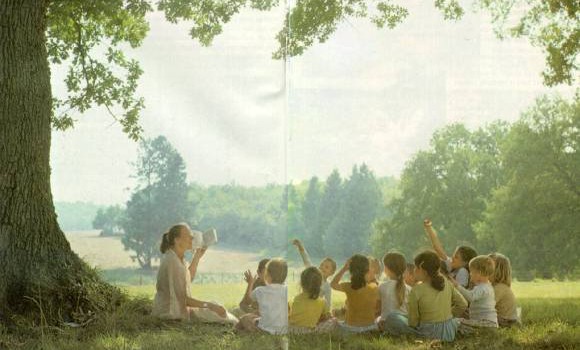 I recently came across something which may help illuminates a dark issue that has been widely discussed and still receives coverage in the media. It is the issue of child abuse within Iskcon. It’s a very disturbing subject. Even more disturbing, some have insinuated that Srila Prabhupada himself was indifferent to the suffering of the Gurukuli children. It is to this charge that I ask you to look at the following.

“Spirit” is a magazine produced by Manu dasa of the Youth ministry and other Gurukuli Alumni. It’s pages contain many “raw documents”, consisting of articles and letters written by self-proclaimed “veterans”. And if you think this term overly dramatic, it really isn’t so. Many of the accounts sound like real war stories.

An article in issue #5 entitled “Hell and Happiness” by Nagnajiti devi dasi is a personal testimony of her experiences as a young girl in the Dallas gurukula and in Iskcon from the age of five. Unfortunately, It’s not an entirely rosy account. She describes at times being subject to conditions that “were almost unbearable”, things “I would not even wish to subject my worst enemy too” such as “being locked up all night in the boiler room for wetting your bed … being severely beaten black and blue for not doing what we were told to do” and ” if you were bad the week before your parents got back from sankirtan, you were not allowed to see them even when they were at the temple”.

Forgive me, my dear reader. I don’t mean to open old wounds, but I think it’s important to see this young ladies’ testimony in context. She didn’t just suffer at the hands of her Gurukula teachers. She explains that after her parents divorced, she was moved from temple to temple until being dropped off at New Talavan where she is abandoned by her Mother and Stepfather at the age of 12 along with her 14 year old brother. A devotee couple adopted her as their own, but had to be sent to the New Orleans temple because of “fist fights” with the temple president’s wife because “he (the temple president) wanted to marry me…I wanted to run away. A couple of times I thought about suicide. But being initiated at age 11, I thought to myself that maybe Krishna was just testing me”.

Once again, gentle reader, please bear with me.

She describes, in an attempt to surrender and be a “good devotee”, she agrees to marry at age 14 someone 12 years her senior. “I figured that I would rather be told what to do by one person instead of fifty”. She explains that because of regular beatings, her marriage was like “living in a hole deep within hell”. After a year and a half of this, she steals some money from the temple, buys a bus ticket and runs away. “I have not been practicing Krsna consciousness since that time” she says. At this point, you may be asking yourself, the title of Nagnajiti’s article was “Hell and Happiness”, so where is the happiness?

She proceeds to tell her story.

“I remember when I was 5 years old, I had become very ill and was taken to the infirmary. While I was waiting for the nurse, I began to cry. Srila Prabhupada was in his quarters and I guess he heard me crying. When I looked up ,there he was, just standing there with the greatest smile I have ever seen in my life. He then picked me up and told me not to cry. He said that everything was going to be okay. He brought me some warm milk from his room and told me to drink it. I remember eating the Tulsi leaves. He then played with me until the nurse came in. It must have been a good half-hour or so”. She continues. “Another wonderful memory I have of Dallas Gurukula was when Srila Prabhupada came to visit, and the whole temple was all out in the yard, getting ready to take the picture for the Vyasa-Puja book. I stood right behind Srila Prabhupada. I remember him turning around and looking right at me and smiling. I felt as though I wanted to fall down at his lotus feet and take shelter of them for all eternity. The only humble thing I could endeavor to say about Srila Prabhupada is that I hope he will be able to forgive me for all the terrible maya I have committed in my life. As the years have gone by, I have never once forgot how wonderful it was to have had the opportunity to meet and be in the presence of such a pure soul as His Divine Grace, A.C. Bhaktivedanta Swami Srila Prabhupada. And only by his great mercy was I able to serve Sri Krsna for the time I did.”

She also observes “they (the teachers) did not know how to discipline the children according to Srila Prabhupada’s instructions” and adds “I don’t really know who set the standards for discipline in the gurukula ashram, but I do know that Srila Prabhupada said to take care of these children with love and understanding”. She concludes her article by saying, “This story is not meant to offend or hurt anyone, it’s just the memories and recollections I have from when I was a devotee and when I was in gurukula”.

This is a “veteran” story that differs very significantly from many others. It contains sentiments not often heard of in the history of the Gurukulis and of those who were entrusted with their care. It is really an account that speaks for itself.

We are very lucky that this Vaisnavi has chosen to share this treasure with us. It is a precious gem that calls for close inspection, a gem that casts great light on the answer to the question; ” What would Srila Prabhupada have done?”