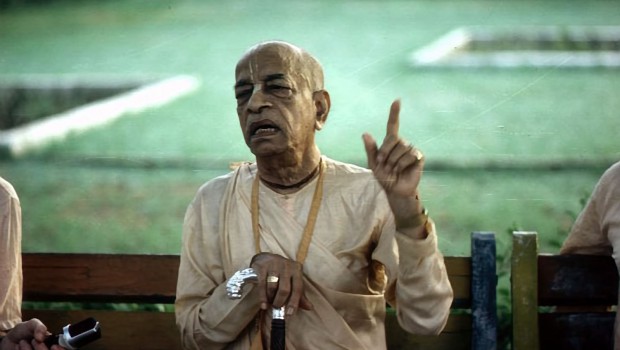 Prabhupada: …but I’m not very much fond of reception. I want to know how people give reception to this movement. That is my concern.
Devotees: Haribol!
Reporter: How long will you be in England, sir?
Prabhupada: England, I think I am coming for the second time. Last time, in 1967, when I was going to India I stayed here for two days only and then went away. Practically, this is the first time I have come.
Reporter: And for how long?
Prabhupada: That I do not know.
Devotees: Haribol!
Prabhupada: I have got so many fathers and mothers to take care, so as long as they keep me, I can be.
Mukunda: If any of you gentlemen have questions, you can ask them of Prabhupada.
Reporter: Yes. Can I ask is this is a very special welcome for you, or is this a performance that you go through each day?
Prabhupada: No. Wherever I go, I have got my disciples. In the Western countries I have got now about twenty centers, especially in America, Canada. So the American boys are very enthusiastic. I think…
Devotees: Haribol!
Prabhupada: I think I got in Los Angeles and San Francisco a very great reception. And in Ratha-yatra festival about ten thousand boys and girls followed me for seven miles.
Devotees: Haribol!
Reporter: What do you try and teach, sir?
Prabhupada: I am trying to teach what you have forgotten.
Devotees: Haribol! Hare Krsna! (laughter)
Reporter: Which is what?
Prabhupada: That is God. Some of you are saying there is no God, some of you are saying God is dead, and some of you are saying God is impersonal or void. These are all nonsense. I want to teach all these nonsense that there is God. That is my mission. Any nonsense can come to me, I shall prove that there is God. That is my Krsna consciousness movement. It is a challenge to the atheistic people. There is God. As we are sitting here face to face, you can see God face to face. If you are sincere and if you are serious, that is possible. Unfortunately, we are trying to forget God; therefore we are embracing so many miseries of life. So I am simply preaching that you have Krsna consciousness and be happy. Don’t be swayed away by these nonsense waves of maya, or illusion. That is my request.
Devotees: Haribol!
Reporter: Is this singing essential to the sustenance of your faith?

Prabhupada: This singing is the process for clearing the dust accumulated on the heart. Our relationship with God is eternal. It cannot be broken. But due to the contact of maya we are trying to forget Him. But if we chant this holy name of God, Hare Krsna, then maya will not act, and we shall very quickly understand what is our relationship with God. That is the process. Ceto-darpana-marjanam [Cc. Antya 20.12].

So my appeal to you is that you try to understand this movement, Krsna consciousness movement. It is not a bogus movement. It is scientific, authorized. Any scientist, any philosopher and logician may come and we shall prove that there is God and we have got eternal relationship with God. So if you want to (be) happy, then you must take to this Krsna consciousness movement. Otherwise the human race is doomed. Harav abhaktasya kuto mahad-guna [SB 5.18.12]. Anyone who has no God consciousness, he has no qualification. However academically he may be very rich, he has no qualification. Manorathena asato dhavato bahih. His only qualification is mental concoction. Mental concoction. That’s all. He has no other qualification. So we reject all these nonsense. We simply accept a sincere soul who wants to dedicate his life for God’s service.

So it is not easy thing. These boys and girls who are following me, they are very elevated. They are not ordinary boys and girls. They have taken to Krsna consciousness. Their quality is greater than any mundane erudite scholar. It is a challenge. Yasyasti bhaktir bhagavaty akincana sarvair gunais tatra samasate surah. Anyone who has developed God consciousness, love of God, all good qualities will automatically develop in him. All good qualities. Test any of our students, how they are good, how they are advanced. Test it. Bring anyone in this world and test any one of our boys. You’ll find how much difference there is in their character, in their feeling, in their consciousness. So this is the only thing. If you want peaceful society, then you must make them God conscious, Krsna consciousness. Everything will be automatically solved. Otherwise your so-called United Nations will not help.

Reporter: Mr. Billy Graham makes people God conscious in a different way. Can you tell me what you think of him?
Prabhupada: I do not know what is Billy Graham, but I am following the Vedic principle, Bhagavad-gita as it is. Krsna says, sarva-dharman parityajya mam ekam saranam vraja [Bg. 18.66]. God says that “You give up all nonsense occupation, simply surrender unto Me, and I take charge of you and give you protection.” This is our philosophy.
Reporter: Can I ask you some questions about your general attitudes on things going on around us? For instance, what do you feel about man going to the moon? (laughter)
Prabhupada: This is simply a waste of time. I already commented on this when I was in San Francisco. The reporters asked me this very question. I flatly replied that it is simply waste of time and money. That’s all. (laughter)
Reporter: What about something very much nearer to ourselves here in this country, and that is a war or civil disturbance is going on…
Prabhupada: Well, war is going on.
Reporter: …between Christians?
Prabhupada: No. We are not Christian nor Hindu nor Muslim. We are God’s servant. That’s all. Anyone who is God’s servant, there is no disagreement. And when one is maya’s servant, servant of maya, illusion, there is disagreement. So it doesn’t matter. Our test is, sa vai pumsam paro dharmo yato bhaktir adhoksaje [SB 1.2.6]. That system of religion is first class which teaches how to love God. That’s all. It doesn’t matter whether it is Christian religion, Muhammadan religion or Hindu religion. We shall see. If the follower of the religion has learned how to love God, then his religion is perfect. Otherwise it is useless.
Reporter: But do you not think it’s worth going to such places as Ireland and trying to talk to the people out there to stop warring?
Prabhupada: Now, this is our talking, that the first-class religion is that which teaches how to love God. Try to understand this. This is the simple formula.
Reporter: Yes, but don’t you think it’s worth going over there to try and help them?
Prabhupada: We shall see. Suppose you are Christian. If you have developed your sense of loving God, then you are perfect, your religion is perfect. But instead of loving God, if you have developed your sense of loving dog, then you have wasted your time. That is our test. Yes. You want to ask any question?
Reporter: I think the lady wants to take you away somewhere. (Prabhupada chuckles)
Reporter (2): I think that the wind is up.
Prabhupada: All right.
Reporter: I should just like to know how old you are.
Prabhupada: I am? I am seventy-four years old. I was born in 1896.
Reporter: Whereabouts?
Prabhupada: In India, Calcutta.
Reporter: Are you married, sir?
Prabhupada: Yes. I have got my sons, grandsons, my wife, all living, but I have no connection with them. I am a sannyasi, renounced order. I have got elderly sons.
Reporter: You say you have no connection with your family?
Prabhupada: No.
Reporter: Why?
Prabhupada: Because I have taken sannyasa. I have dedicated my life for Krsna. That is the Vedic system, that certain portion of your life should simply dedicate for God. That is called sannyasa.
Reporter: To do this, did you have to divorce?
Prabhupada: No. There is no question of. We do not know what is divorce. In our country there is no divorce, at least in Hindu law. Yes. Wife and husband, once combined, that is for life. There is no question of separation, in all circumstances. Either in distress or in happiness, there is no question of separation. Now our modern politicians, they have introduced this divorce law. Otherwise, according to Hindu, Manu-samhita, there is no divorce law.
Reporter: When did you renounce your family?
Prabhupada: In 1959.
Reporter: How are they managing without you?
Prabhupada: They are managing. My sons are grown up; they are earning. My wife is also rich man’s daughter. She has got some property. So they have no problem.
Reporter: Do you ever see them at all?
Prabhupada: No. I cannot see. I cannot see at least my wife. But if my sons and daughters come to see me, they can see. But my wife cannot see me. That is stopped. That is the system of sannyasa. A sannyasi cannot meet his wife again. That is renouncement. Renouncement means renouncing connection with woman, or renouncing sex life. That is renouncement.
Reporter: Coming this way, sir?
Prabhupada: Yes. (cameras clicking)
Reporters: Thank you very much.
Prabhupada: Thank you.
Devotees: All glories to Sri Sri Guru and Gauranga! Haribol! (end) 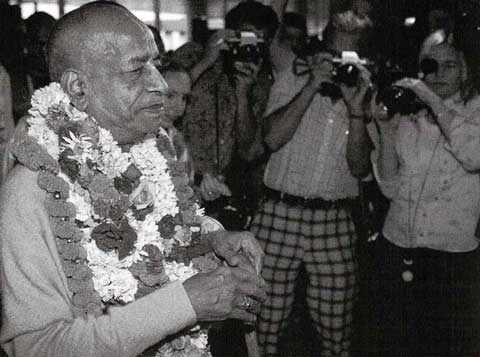