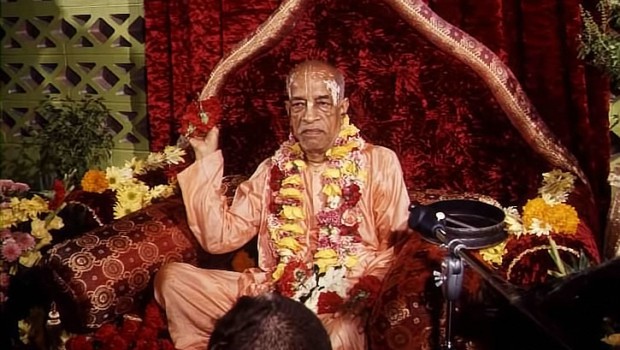 “The rarity of devotional service is also confirmed in the tantra-sastra, where Lord Siva says to Sati, ‘My dear Sati, if one is a very fine philosopher, analyzing the different processes of knowledge, he can achieve liberation from the material entanglement. By performance of the ritualistic sacrifices recommended in the Vedas, one can be elevated to the platform of pious activities and thereby enjoy the material comforts of life to the fullest extent.

“But all such endeavours can hardly offer anyone devotional service to the Lord, not even if one tries for it by such processes for many, many thousands of births.’ ” (from Nectar of Devotion by Srila Prabhuapda)

Although Srila Prabhupada left our material vision in 1977 he still remains personally with his sincere followers in the form of his teachings and in the from of his murti. He is still with us and is still ready to give us unlimited mercy. We simply have to be prepared to take advantage of Srila Prabhuapda’s mercy.

Similarly Srila Prabhupada, Krishna’s pure devotee is also present in his murti form and can also give his unlimited mercy to sincere souls who serve him in this form. 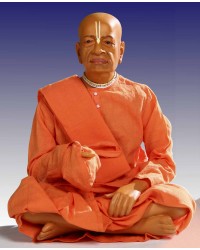 Until
now very good quality Prabhupada murtis were not available except by special order and at a very high cost. But now Srila Prabhuapda has very mercifully appeared in this magnificiant 10.5″ form.

This Prabhuapda murti is so life-like, so perfectly made, and Srila Prabhuapda comes with a full set of clothes, and is available in three different styles. Japa, Kirtan and Darshan. He is based on an original sculpture by Locan Dasa, who has sculpted many of the famous Prabhuapda murtis in ISKCON temples all over the world.

Srila Prabhupada, in this most beautiful form, will be very happy to appear in your house and accept service from you. If you simply serve Srila Prabhuapda in his murti form by cooking nice food and offering it to him, by chanting the Hare Krishna mantra in front of him, by reading his books in front of him, I will personally guarantee that Srila Prabhuapda will give you his mercy and this will make it possible for you to perform devotional service.

Without the mercy of a pure devotee of Krishna there is no chance of actually advancing in Krishna consciousness. This is the perfect chance to get the mercy of Srila Prabhuapda. Simply install the Prabhuapda murti in your house and keep him nicely clean and dressed and offer him nice foodstuffs and chant Hare Krishna in front of him and just see how your spiritual life will improve!

The price is supposed to be $99. Which is really an amzing price. However for a short time, just to make sure everyone who wants a Srila Prabhuapda murti can afford him, the price is only $63!

So please place your order at:

Please note that you can select from 3 different styles, japa, kirtan and darshan, you will see the photos on the website.

If you have any questions about this please write to me.

11 Responses to Srila Prabhupada can appear in your house!