The “Acarya” series of videos were made in the 1980’s by ISKCON television using the 16mm film footage that was left over from Yadubara Prabhu’s documentary on the life of Srila Prabhupada: Your Ever Well-Wisher. Fortunately Yadubara Prabhu took far too much film to fit into a 50 minute biography so there was enough high-quality 16mm film left over to produce the Acarya series.

In these films you will travel with Srila Prabhupada around the world as he introduces the science of Krishna consciousness to the people of the Western world. In a few short years Srila Prabhupada makes “Hare Krishna” a household word and gets millions of people chanting Hare Krishna all over the world.

You can read the narration and sound track of this film below.

In 1965 an elderly gentleman stood on the deck of a freighter in Boston Harbor and wrote this prayer: “How will I make them understand this message of Krishna consciousness? I am very unfortunate, unqualified and the most fallen. Somehow or other, O Lord, You have brought me here to speak about You. Now, my Lord, it is up to You to make me a success or failure, as You like.” Twelve years later “Hare Krishna” was a household word.

A.C. Bhaktivedanta Swami Prabhupada had been more than successful. He had founded the International Society for Krishna Consciousness, a world-wide confederation of over one hundred ashrams, schools, temples, and farm communities and had made the chanting of Hare Krishna familiar to millions of people. He had written and published over eighty volumes of translation and commentary on self-realization which are now standard in Universities and libraries around the world and he had gathered about him thousands of dedicated disciples.

Srila Prabhupada became known to the world as a scholar, philosopher, social critic and spiritual leader but to his disciples, Srila Prabhupada was dearmost friend, father and inner guide.

The word “acharya” means one who teaches by example and the following unedited footage provides and intimate glimpse into the exemplary life of Srila Prabhupada. To most people, the daily activities of a spiritual master are a mystery and it is interesting to see how such an important historical figure conducted his every-day affairs. What emerges is an endearing portrait of an authentic spiritual personality.

…This is a conversation between Maharaja Pariksit and Sukadeva Gosvami. Maharaja Pariksit, five thousand years ago, he was the emperor of the whole world. Formally, up to five thousand years ago, the whole world was being controlled and ruled over by Kings whose capital was Hastinapur, New Delhi. There was only one flag, only one ruler. One scripture. Vedic scripture, and the Aryans, araya, they were the civilized persons. You Europeans, Americans, you are also Aryans. Indo-European stock. Maharaja Tejasi, grandson of Maharaja Pariksit, he gave to his two sons the portion of Eastern Europe, Greek and Roman. That is the history. Mahabharata, Mahabharata means “great India.”

Those who have read Bhagavad-gita, It is said there, in the fifteenth chapter: vedais ca sarvair aham eva vedyam, “Vedic knowledge means to understand God.” This is Vedic knowledge.

Later on, with the progress of Kali-yuga. Kali-yuga means “the dark age” or “the sinful age” or “the age for argument, unnecessary talks and fight.” This is called “Kali-yuga.” That is going on. Since the last five thousand years the Kali age has begun. And the beginning of Kali-yuga was cow slaughtering.

So, at the present moment, practically there is no brahmin, no ksatriya, no vaisya–only sudras–forth-class men. So you cannot expect any happiness guided by the forth-class man. That is not possible. Therefore, throughout the whole world, there is chaotic condition. Nobody is happy. So, this is essential, that the human society must be divided into four divisions.

The brahmin class means the first-class, ideal man. So that by seeing their character, their behaviour, others will try to follow: yad yad acarati sresthas. So this Krishna consciousness movement means we are trying to create some first-class men. This is Krishna consciousness. This movement. So, therefore, we have got these rules and regulations:

This is the preliminary qualification of a first-class man.

Srila Prabhupada: I do not know, I am not an expert.

Srila Prabhupada: Then do that.

…So, past, present, future you exist, the body changes. This is not clear?

Srila Prabhupada: So therefore, conclusion, that when he will not have this body he will have another body. You are sitting here, if you don’t sit here, you go. That does not mean your sitting opportunity is lost. You are sitting here, you’ll sit somewhere else. Similarly, the change of body is going on. Therefore the conclusion is that after you give up this body, you’ll have another body. As you have already done. What is the difficulty to understand?

Devotee: The seeming difficulty is that one… while the body is from that of a boy…

Srila Prabhupada: Diff… Body must be different. Therefore that is called change of body. Unless it is different body, where is the change?

Devotee: The memory is there. Of the boy and… The spirit…

Srila Prabhupada: Memory. Sometimes we may not remember. Just like your, this child, he may not have a memory when he was very small but you have got memory. When he was a small child he was doing something. He was playing with some cats and dogs, but he does not remember that but you remember it. So simply because he has forgotten, it does not mean that the incidences were not present. So this argument is not very strong, because I cannot remember. You do not remember so many things.

…But the fact is this–that you are changing from this body to this body to this body… Therefore the conclusion should be that after this body I’ll accept another body. That’s a fact. As you have accepted, in this life, from one body to another body. There is a process, how to accept. Similarly, under the same process, you accept another body, when this body is no longer useful. Just like at night you give up this body, you take your subtle body and you go to somewhere. You are sleeping in your room but you are working in a different place. Don’t you do that? So, because this body is still useful, therefore you come back again in this body. In the morning you wake up, in this body.

So death means when this body is useless, it will not come to this body, we accept another body. This is called death. That subtle body takes you from this body to the womb of another mother. By natures direction that this soul shall get this kind of body. So the soul is entered in the womb of another mother’s body. And then the body is prepared. By the mothers blood and flesh. And when the body is sufficiently capable of working itself then it comes out again. And begins his work. This is birth and death.

The soul is eternal therefore a sober man should think, “Why should I change my body?” “Why this struggle I should take?” That is human sense. If I am eternal, why not my eternal body, eternal existence, why shall I die? This is human sense. Unless one comes to this understanding, he is animal because animal, by natures law is going on, he does not know. Then a human form of body, when you understand that I’ll have to change this body. I’ll have to get another body. Then the question is: “What kind of body I shall get?” That is human intelligence.

By natures way we are getting body, but that is on the selection of the nature according to my work. If I work like animal I get animal’s body. If I work as demigod, I get demigods body. If I acted as trees, then you get tree body. If he acted like dog he will get dogs body. Nature’s way. Therefore you find so many varieties of bodies.

This philosophy does not appeal?

…Naturally I want to love. It is not unnatural. When that love is reposed to Krishna, that is perfect. The Mayavadis, they are frustrated, therefore they want to make this love into zero. They cannot understand Krishna’s love with gopis. They think it is another edition of this material…

Oh, how are you, Hayagriva Prabhu? You look better, you are looking better, brighter, when I saw you in New Vrindavana last. You have got so much talents for serving Krishna. Everyone has got. That I am speaking. We have to utilize it so that modern man can understand, otherwise we are repeating the same thing. They are repeating also same thing, sense gratification: punar punas carvita-carvananam. But because that is material they’re not getting happiness. But the spiritual thing, we are chanting the same Hare Krishna. Simple thing, repeating, but we are getting transcendental happiness. What we are doing? Same Hare Krishna, Hare Krishna. So, process is the same, the subject matter is different.

So why you are behind publication, now all the big men are here. Why our books are behind? So, if you wait for another birth, maybe you may not get. Even Bharata Maharaja, he also slipped, and became a deer. So we should always keep vigilance. We have got this opportunity, human form of life. Let us utilize it to the fullest extent and be fit for going back to home. That is intelligence. Not that, “All right, I shall get again chance next birth.” That is not very good policy: turnam, turnam means very hastily finish.

These people are wasting time. They are resounding some sound thinking that this sound will save them. This is called foolishness, mudha. You can ask them that why you are sounding so loudly? Chant Hare Krishna. They will laugh.

Devotee: Srila Prabhupada, what did Bhaktivinoda Thakura mean when he said, “I am going, my work unfinished.”

Srila Prabhupada: So let us finish. We are descendant of Bhaktivinoda Thakura. He kept unfinished so that we shall get the chance to finish it. That is his mercy. He could have finished immediately. He is Vaisnava, he is all-powerful. 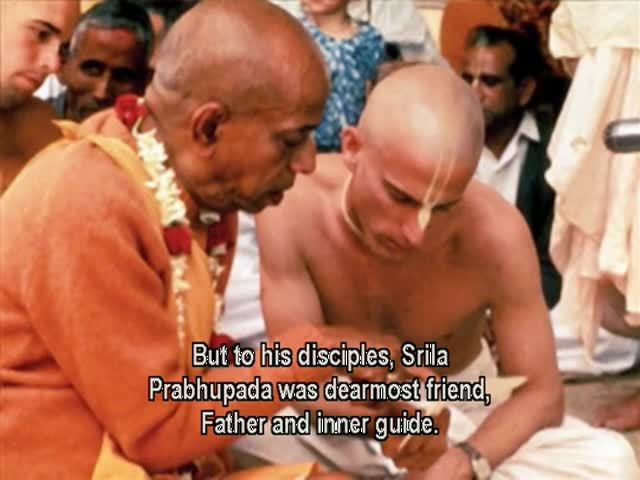