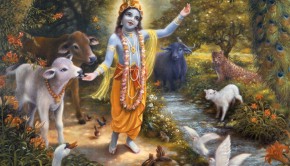 The more you are engaged in Krishna consciousness, as Krishna says, always think of Me, you just become My devotee." It is very simple thing.