Thousands of people inhabiting the Vrindavan home of Hindu god Krishna are waging a grim campaign to save their land from illegal mining and stone quarrying.

For many years I have thought myself a devotee of Lord Shiva. Recently my daughter was diagnosed with cancer and i find myself worshiping Lord Krishna

She exposed her body to his view and said, "You are so beautifully built. What woman could control her mind after seeing you? I want to be united with you."

Not that soldiers would fight and leaders would remain in a secure place, no. The oldest man was taking the risk of fighting. This is ksatriya spirit 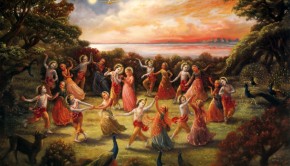 MY LORD KRISHNA [a poem]

O! my Lord in this dark era me you created, bestow me transcendental devotion at your lotus feet, O my lord Krishna show me the light on my path

There is no peace or happiness in our worldly life. Circumstances create turmoil and annoyance. Chant the mahamantra loudly. This will drive away all evils.

Stay on the Light Side

We have to mold our life in such a way that twenty-four hours, not a single moment wasted, we should be engaged in the service of the Lord’s relations