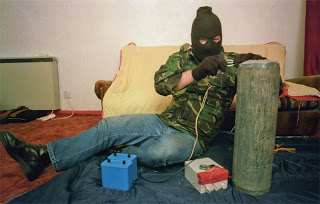 You write that things are in a crises in England, with oil shortages and IRA bombing. Therefore, we have to take shelter of Krsna. If Krsna wants to kill us, that is not wrong, if it is His desire. Our business should just be to follow the regulative schedule, deity worship, distributing prasadam, chanting, book distribution and never mind the material danger. Krsna Consciousness means to be on the platform of

Yogesvara: One problem that seems to be occurring more and more frequently is the appearance of terrorists, that is to say, men who are motivated for some political reasons.

Prabhupada: Yes, I have already explained the whole basic principle. Because they are animals, so sometimes ferocious animal. That’s all. There are different types of animals- tigers and lions. So if some animal comes as very ferocious, that is not very astonishing. After all, you are living in an animal society.

The only solution is that you become an ideal human being. Either a tiger comes or elephant comes, but you don’t become an animal. Counteract. That is required.

A human being is called a rational animal. You come to rationality, that is required. If you remain also another type of animal, that will not help you. You have to become actually human being.

A dog is simply chewing one bone, this way, that way, this way, that way. Because he is an animal he has no other engagement. So this whole society is like an animal. Especially the westerners have developed a civilization based on animal propensities: “I am this body, and the best use of my life is to gratify my senses.” This is animal.

You have to introduce a real human civilization. You should not be surprised if animals in different shapes and different capacities come out. As the dog is thinking, “I am dog, very stout and strong dog,” so a man is thinking, “I am big nation.” But what is the basic principle? A dog is thinking on the basis of his body, and this big nation is also thinking on the basis of body. So there is no difference between this dog and this big nation. The only difference is that a human being, by nature’s gift, has got better senses. There is no education to utilize the better senses to advance spiritually and get out of this material world. He is simply using that better intelligence for animalism. Now we have to counteract this for the benefit of the human civilization. (Letter Jan.1 1974, Morning walk May 28, 1974 Rome)

O dear Lord Krsna, O eternal Deity of transcendental bliss and knowledge, You are imperishable, and we offer our respectful obeisances unto Your lotus feet. It is by Your causeless mercy that we have been released from the imprisonment of Jarasanda, but now we pray that You release us from imprisonment within material existence, Your illusory energy. We now have sufficient experience of the miserable material life in which we are fully absorbed, and having tasted its bitterness, we have come to take shelter under Your lotus feet. (The imprisoned kings-Krsna Book)

2 Responses to Terrorists in England!