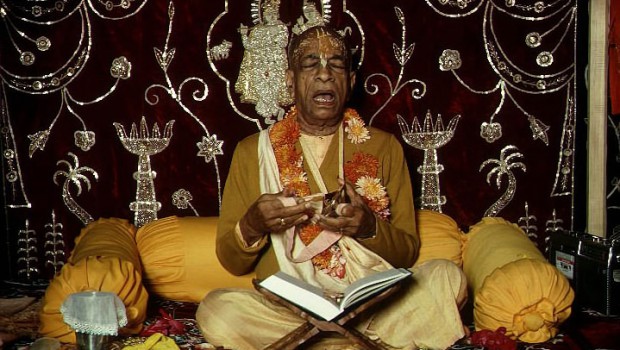 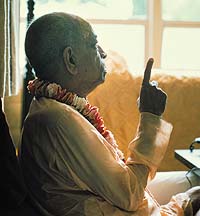 So we got this information from His Divine Grace Bhaktisiddhanta Sarasvati Thakura, and that knowledge is still going on. You are receiving through his servant. And in future the same knowledge will go to your students. This is called parampara system. Evam parampara prap… It is not that you have become a student and you’ll remain student. No. One day you shall become also guru and make more students, more students, more. That is Caitanya Mahaprabhu’s mission, not that perpetually… Yes, one should remain perpetually a student, but he has to act as guru. That is the mission of Caitanya Mahaprabhu. It is not that because I am acting as guru, I am no longer student. No, I am still student. Caitanya Mahaprabhu taught us this instruction that we shall always remain a foolish student before our Guru Maharaja. That is the Vedic culture. I may be very big man, but still, I should remain a foolish student to my guru. That is the qualification. Guru more murkha dekhi’ karila sasana. We should be always prepared to be controlled by the guru. That is very good qualification. Yasya prasadad bhagavat-prasadah. Ara na kariha mane asa. So we should become always a very obedient student to our guru. That is the qualification. That is the spiritual qualification.

Here, in December of 1976, only months before his departure from our material vision, Srila Prabhupada clearly orders his disciples to act as gurus in the future. Prabhupada states his disciples will not remain only students. As Srila Prabhupada has received the knowledge from his guru and he is acting as diksa guru by giving the same knowledge to his students, in the same way his students must go on to become diksa gurus and give the same knowledge to their students. Prabhupada is ordering his students to become qualified diksa gurus.. That is Caitanya Mahaprabhu’s mission. The qualification is required: “I should remain a foolish student to my guru. We should always be prepared to be controlled by the guru.”

660729BG.NY Lectures
There is no consideration of material impediment. So it is open for everyone. Catur-varnyam maya srstam. That is a chance given, that you can become a brahmana, you can become a great devotee of Lord Krsna, and you can become the spiritual master of the world. That is the… And I think you should take seriously.

680817VP.MON Lectures
Now, this spiritual master’s succession is not very difficult. Of course, my students, they offer me so much respect, but all these respects are due to my spiritual master. I am nothing. I am just like peon. Just like peon delivers one letter. He is not responsible for what is written in that letter. He is not responsible for what is written in that letter. He simply delivers. But a peon’s duty is that he must sincerely carry out the order of the postmaster and deliver the letter to the proper person. That is their duty. Similarly, this parampara system is like that. Every one of us should become a spiritual master because the world is in blazing fire. (aside:) You can give them prasadam. Now, of course, time is very high. So to understand the spiritual master… Spiritual master is not a new invention. It is simply following the orders of the spiritual master. So all my students present here who are feeling so much obliged… I am also obliged to them because they are helping me in this missionary work. At the same time, I shall request them all to become spiritual master. Every one of you should be spiritual master next. And what is their duty? Whatever you are hearing from me, whatever you are learning from me, you have to distribute the same in toto without any addition or alteration. Then all of you become the spiritual master. That is the science of becoming spiritual master. Spiritual master is not any… To become a spiritual master is not very wonderful thing. Simply one has to become sincere soul. That’s all. Evam parampara-praptam imam rajarsayo viduh. In the Bhagavad-gita it is said that “By disciplic succession this yoga process of Bhagavad-gita was handed down from disciple to disciple. But in course of time that disciplic succession is now lost. Therefore, Arjuna, I am teaching you again the same philosophy.”

Songs Purport to Sri-Sri-Gurv-astakam 690102PU.LA
We should always remember that the spiritual master is in the disciplic succession. The original spiritual master is the Supreme Personality of Godhead. He blesses his next disciple, just like Brahma. Brahma blesses his next disciple, just like Narada. Narada blesses his next disciple, just like Vyasa. Vyasa blesses his next disciple, Madhvacarya. Similarly, the blessing is coming. Just like royal succession–the throne is inherited by disciplic or hereditary succession–similarly, this power from the Supreme Personality of Godhead has to receive. Nobody can preach, nobody can become a spiritual master, without obtaining power from the right source. Therefore the very word, it is stated here, praptasya. Praptasya means “one who has obtained.” Praptasya kalyana. What he has obtained? Kalyana. Kalyana means auspicity. He has received something which is auspicious for all the human kind. Praptasya kalyana-gunarnavasya. Here is another example. Gunarnava. Arnava means ocean, and guna means spiritual qualities. Just like the same example is going on. It is very nice poetry. There is nice rhethorics and metaphor. The example is set, blazing fire, and it is to be extinguished with the cloud. And wherefrom the cloud comes? Similarly, wherefrom the spiritual master receives the mercy? The cloud receives his potency from the ocean. Therefore the spiritual master also receives his power from the ocean of spiritual quality, that is, from the Supreme Personality of Godhead. So praptasya kalyana-gunarnavasya. Such kind of spiritual master, one has to accept, and vande guroh sri-caranaravindam, and one has to offer his respectful obeisances to such authorized spiritual master. (end)

710718RC.DET Conversations
Prabhupada: Yes. All of them will take over. These students, who are initiated from me, all of them will act as I am doing. Just like I have got many Godbrothers, they are all acting. Similarly, all these disciples which I am making, initiating, they are being trained to become future spiritual masters.

Here Prabhupada clearly states his disciples are being trained to be future diksa gurus. They will act just as he is acting [ie: they will act as diksa gurus]. Of course they have to become qualified…

Here Prabhupada orders his disciples to become guru, just like him (ie: diksa gurus) Once again he mentions the qualifications.

750302BA.ATL Lectures
So you are hearing this philosophy daily. Try to understand more and more. We have got so many books. And this is the mission of Caitanya Mahaprabhu and, by disciplic succession, Bhaktivinoda Thakura, then my spiritual master. Then we are trying our level best. Similarly, you will also try your level best on the same principle. Then it will go on. Same principle. It doesn’t matter whether one is born in India or outside India. No. When Caitanya Mahaprabhu said, prthivite ache yata nagaradi-grama, “As many towns and cities and villages are there,” He did not say it to make a farce. He is the Supreme Personality of Godhead. So sometimes I am very much criticized that I am making foreigners a brahmana. The caste brahmanas in India, they are very much against me. But this is not fact. When Caitanya Mahaprabhu said that all over the world His message will be broadcast, does it mean that it will be simply a cinema show? No. He wanted that everyone should become perfect Vaisnava. That is His purpose.

Here Srila Prabhupada orders his disciples to try their level best on the same principle as Bhaktivinoda Thakura, Bhaktsiddhanta and himself. Clearly all these devotees acted as diksa gurus and accepted disciples. And Prabhupada orders his disciples to act on the same principle and states “This is the mission of Caitanya Mahaprabhu.” He also mentions the qualification: “everyone should become perfect Vaisnava.”

720518AR.LA Lectures
So we have got this message from Krsna, from Caitanya Mahaprabhu, from the six Gosvamis, later on, Bhaktivinoda Thakura, Bhaktisiddhanta Thakura. And we are trying our bit also to distribute this knowledge. Now, tenth, eleventh, twelfth… My Guru Maharaja is tenth from Caitanya Mahaprabhu, I am eleventh, you are the twelfth. So distribute this knowledge. People are suffering. They are simply fighting on some false thing, maya. They should be given the real fact of happiness.

68-12-03 Letter: Hamsaduta
Next January there will be an examination on this Bhagavad-gita. Papers will be sent by me to all centers, and those securing the minimum passing grade will be given the title as Bhakti-sastri. Similarly, another examination will be held on Lord Caitanya’s Appearance Day in February, 1970 and it will be upon Srimad-Bhagavatam and Bhagavad-gita. Those passing will get the title of Bhakti-vaibhava. Another examination will be held sometimes in 1971 on the four books, Bhagavad-gita, Srimad-Bhagavatam, Teachings of Lord Caitanya, and Nectar of Devotion. One who will pass this examination will be awarded with the title of Bhaktivedanta. I want that all of my spiritual sons and daughters will inherit this title of Bhaktivedanta, so that the family transcendental diploma will continue through the generations. Those possessing the title of Bhaktivedanta will be allowed to initiate disciples. Maybe by 1975, all of my disciples will be allowed to initiate and increase the numbers of the generations. That is my program. So we should not simply publish these books for reading by outsiders, but our students must be well versed in all of our books so that we can be prepared to defeat all opposing parties in the matter of self-realization.

From this statement it is abundantly clear that Prabhupada’s mission from the very beginning was to educate his disciples so some of them would become qualified diksa gurus and initiate their own disciples. He wants to transfer the title of Bhaktivedanta and the power to preach and accept disciples to his disciples. He clearly states that “this is my program.” The qualification is there… One must pass the examination on all the books… “Our students must be well versed in all of our books so they are prepared to defeat all opposing parties in the matter of self-realization.”

I expect Krishna Kant will come back with pages of nonsense meant to divert the readers attention from the points Srila Prabhupada has clearly established here and claim “I have defeated Madhudvisa.” But we will leave it to the thoughtful readers to decide who has actually been defeated.