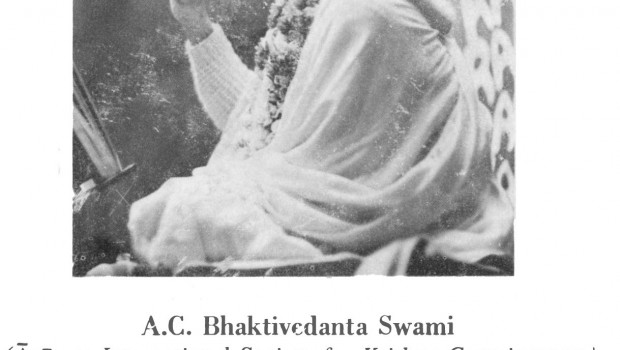 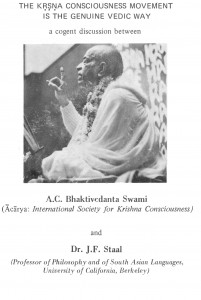 On January 11, 1970, an article appeared in the Los Angeles Times on the Krishna consciousness movement. What follows are excerpts from the article and the unusual correspondence that ensued between the two authorities, A.C. Bhaktivedanta Swami and Professor Staal.

To download The Krishna Consciousness Movement is the Genuine Vedic Way please click on the book cover image on the left.

“…Dr. J.F. Staal, professor of philosophy and Near Eastern languages at UC Berkeley and an instructor in Indian philosophy, believes that the Krishna sect is an authentic Indian religion and that its adherents are sincere. He attributes the Society’s rapid increase in members to the tendency of today’s younger generation to reject organized churchgoing while at the same time searching for fulfillment of a belief in mysticism.” He points out, however, that persons who turn away from Christianity, Mohammedanism, and Judaism have usually lost faith with the personal god of those religions and are looking for a mystical religion without absolutes.

“‘These people in the Krishna movement have turned to Hinduism, but, curiously, it is a cult that is highly personalistic,’ Staal said. ‘They accept a personal god, Krishna, and Christianity has that. I feel that they have transferred some of their Christian background to a Hindu sect.’

“He also feels that they spend too much time chanting to develop a philosophy. On these grounds he and others on the faculty turned down the request to grant credit for an experimental course in Krishna consciousness which will be taught during the winter quarter by Hans Kary, president of the sect’s Berkeley temple.”