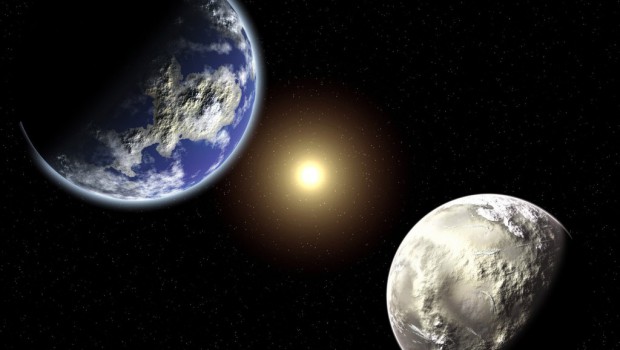 The Moon and the Sun…

Srila Prabhupada has the strength to have complete faith in Krishna, in his spiritual master and in the Vedas. That is his unique qualification. Unfortunately most so-called devotees of Krishna today prefer to put their faith in the theories of modern science, rejecting the Vedic version. Such devotees have no faith and will never be able to understand the real imports of the Vedic knowledge as this requires absolute faith in the Lord and the bona fide spiritual master.

Modern “science” can never give us perfect knowledge. For it is a result of imperfect information observed through the imperfect senses of “scientists” who all have the tendency to cheat and make mistakes and are illusioned [they accept so many things to be facts which are not facts at all]. So no perfect knowledge can come from such scientists.

Of course the “scientists” put on a grand show and try to convince us they know everything about how the universe works. If you ask them any question they have an answer ready… They give the impression that they know everything. But when one closely analyses any field of science one finds nothing is really very “scientific” at all. There are still so many unanswered questions and contradictions.

One big problem with science is every scientist comes up with his own idea, his own theory and sets about to prove it. That is called the hypothesis, then, according to the “scientific method,” one must prove it or disprove the hypothesis by observation and experimentation. In the process the tendency is for the scientist to ignore everything except the evidence that supports his hypothesis. So much evidence gets ignored or suppressed in this way.

The world of “science” is limited by the theories of the scientists. If the “scientists” can not imagine something then there is no way this so-called “scientific method” can ever discover it.

Thanks to Srila Prabhupada we know that many of the basic fundamental principles of modern science are completely wrong. The whole philosophy of science is based on the assumption that everything can be explained by studying four of the material elements [earth, water, fire and air] but this assumption is completely flawed. Modern “science” is completely ignorant of ether, mind, intelligence, false ego and of course the soul and the supersoul.

Modern “science” is something like studying a motor car engine to try and work out how the motor car knows how to get to its destination… Actually the motor car engine has no way at all of getting to the destination. It is the driver who is controlling it and directing it who knows how to get to the destination. But modern science refuses to accept that there is any driver at all in either the individual bodies or in the universal body. They can not see the driver in the motor car and so try to explain all the complex workings and movements of the car by studying the mechanics of the car… Without even knowing that the driver exists…

Modern “science” is childish, it is foolish. They are fools and rascals and we should stand up and tell everyone that the so-called modern scientists are nothing but fools, asses and rascals as Srila Prabhupada quite fearlessly did. But very few devotees seem to have faith in Prabhupada and the Vedas these days… They seem to have more faith in the scientists… Maya is very strong…

Sadaputa Prabhu did come up with a nice presentation on this point, he called it “knowledge filtering.” Science only accepts “knowledge” if it fits in with their understanding of the world, otherwise they reject it. So when the Vedas describes a very advanced civilization that existed hundreds of thousands of years ago, even millions of years ago, they can not accept it. Even when they find the proof of it they still refuse to accept it. It is unthinkable to them. It completely contradicts the world–as they know it. But, little do they know, the real world, the real universe, is not at all like the world they have imagined and the world that all their scientific theories describe.

Modern “science” has created an imaginary world where there is no soul, there is no need for any higher intelligence, a world where everything can be explained by the chance interaction of material elements. A world where the life force does not exist at all, it is simply a manifestation, a reaction from a certain chance chemical combination… and if we give them information about the real world they can not accept it… They will not accept it.

Their whole world is evolution. Evolution is the most fundamental belief that practically all of today’s science is built on. And there is evolution also–but it is the consciousness that evolves or devolves–not the body. All the bodies of all the 8,400,000 species of life are existing–if not in a physical form in a subtle form–and when a particular living entities’ consciousness matches a particular body he is awarded that type of body. But all the individual species exist eternally. It is the individual souls who are evolving and devolving up and down through the different species of life, not that one species is evolving into another species by “natural selection.” That is a completely incorrect theory.

According to the wonderful and insane theory of “modern” evolution somehow magically single-celled creatures appeared by chance–perhaps because of a lightning storm, which also came from nowhere and had no cause… and somehow these single-celled creatures who magically and inexplicably appeared gradually developed, by chance mutations, into more advanced creatures… and after millions of years, completely by chance random mutations, humans were produced, completely by chance with no higher intelligence involved. This modern evolution theory a fairy-tale for adults. It is so far-fetched and so impossible but the “scientists” cling to it as if their very lives depend on it because evolution is the only “logical” way they can explain that we came into existence with no higher intelligence above us… Evolution is the religion of the atheists.

We know that this whole theory is so WRONG. We know the first creature born in this universe was Lord Brahma. He took birth on the lotus flower atop the stem that sprouted from the abdomen of Vishnu. Lord Brahma, the first life in this universe, except for Vishnu, is the MOST evolved creature with the highest intelligence and is greater and more evolved than any other creature in the universe. So the first life was the most evolved creature. Not a single-cell creature at all…

So “science” is so, so wrong. But they love evolution because it enables them to believe that everything happens by chance, that there is no authority, there is no higher intelligence above them. They do not have to surrender to anyone, they do not have to serve anyone. This is the real point of science. To provide a world-view where there is no necessity for a God or any form of higher intelligence. That way humans are at the top of the ladder and the most powerful, and free to do as we like… But it is all wrong, so terribly wrong…

The Vedic view of the universe is correct and the so-called scientific view is incorrect. There are so many issues here and I have explored them in some detail and know the Vedic view of the universe presents a model of the workings of the universe which perfectly predicts all the observations we can make. It predicts the movement of the planets, the stars, the constellations, the sun, the moon, the changing seasons, the changing length of the days and nights, the solar and Luna eclipses, etc. Everything is perfectly predicted.

Let us not forget since the beginning of time this Vedic model of the universe has been used and the Vedic culture has had such advanced astronomical and astrological information which Western science has only discovered in the past 80 years.

Our position is something like that of a tiny ant stuck in one small corner of a huge machine of great complexity. We can not move out of our tiny corner and we can only see a very small part of a couple of small pieces of the great machine and a few flashing lights moving in the distance. How, stuck in that tiny corner, can we ever understand the workings of that machine?

We could speculate for millions of years but it would not help. We can not see what is going on and we can not see how the machine is working or what is making it work. These things are simply beyond the power of our senses to perceive. We can never understand the universe in this way.

Fortunately Narada Muni, the spiritual master of Srila Vyasadeva, the father of Sukadeva Gosvami, who spoke the Srimad-Bhagavatam, is not like us. Srila Narada Muni is a transcendental spaceman, he can, at his will, immediately travel to any place in the universe and even to the spiritual world. So he has the ability of seeing the universe from every angle of vision therefore he can describe how the universe is working as he has seen how it is working.

Sukadeva Goswami has got this information of how the universe is moving from Narada Muni in the disciplic succession and although he may not have personally seen it with his eyes he has seen it through the disciplic succession. That is real seeing. Real seeing is done with the ears by hearing from the bona fide spiritual master. This type of seeing is perfect. We should see through the eyes of the sastra, not through the imperfect mundane eyes of modern so-called science.

38 Responses to The Moon and the Sun…