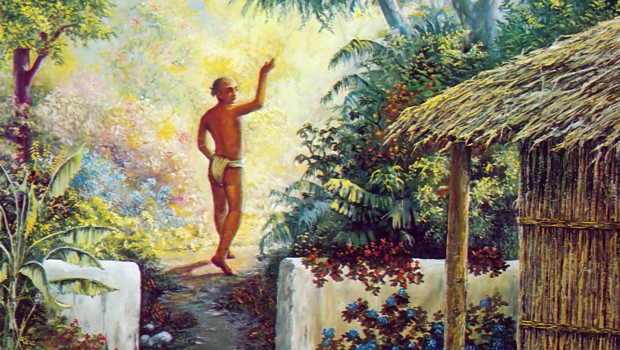 The Story of Haridasa Thakur and Ramachandra Khan

A landholder named Ramachandra Khan was the zamindar of that district. He was envious of Vaisnavas and was therefore a great atheist. Unable to tolerate that such respect was being offered to Haridasa Thakura, Ramachandra Khan planned in various ways to dishonor him.

Here is a nice story from Sri Chaitanya Charitamrita.

After leaving his home, Haridasa Thakura stayed for some time in the forest of Benapola. Haridasa Thakura constructed a cottage in a solitary forest. There he planted a tulasi plant, and in front of the tulasi he would chant the holy name of the Lord 300,000 times daily. He chanted throughout the entire day and night. For his bodily maintenance he would go to a brahmana’s house and beg some food. He was spiritually so influential that all the neighboring people worshiped him.

A landholder named Ramachandra Khan was the zamindar of that district. He was envious of Vaisnavas and was therefore a great atheist. Unable to tolerate that such respect was being offered to Haridasa Thakura, Ramachandra Khan planned in various ways to dishonor him. By no means could he find any fault in the character of Haridasa Thakura. Therefore he called for local prostitutes and began a plan to discredit His Holiness. 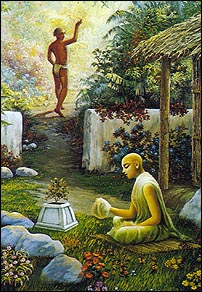 At night the prostitute, after dressing herself most attractively, went to the cottage of Haridasa Thakura with great jubilation. After offering obeisances to the tulasi plant, she went to the door of Haridasa Thakura, offered him obeisances and stood there. Exposing part of her body to his view, she sat down on the threshold of the door and spoke to him in very sweet words. “My dear Thakura, O great preacher, great devotee, you are so beautifully built, and your youth is just beginning. Who is the woman who could control her mind after seeing you? I am eager to be united with you. My mind is greedy for this. If I don’t obtain you, I shall not be able to keep my body and soul together.”

Haridasa Thakura replied,”I shall accept you without fall, but you will have to wait until I have finished chanting my regular rounds on my beads. Until that time, please sit and listen to the chanting of the holy name. As soon as I am finished, I shall fulfill your desire.” Hearing this, the prostitute remained sitting there while Haridasa Thakura chanted on his beads until the light of morning appeared. When she saw that it was morning, the prostitute stood up and left. Coming before Ramachandra Khan, she informed him of all the news. “Today Haridasa Thakura has promised to enjoy with me. Tomorrow certainly I shall have union with him.”

The next night, when the prostitute came again, Haridasa Thakura gave her many assurances. “Last night you were disappointed. Please excuse my offense. I shall certainly accept you. Please sit down and hear the chanting of the Hare Krsna maha-mantra until my regular chanting is finished. Then your desire will surely be fulfilled.” After offering her obeisances to the tulasi plant and Haridasa Thakura, she sat down at the door. Hearing Haridasa Thakura chanting the Hare Krsna mantra, she also chanted,”O my Lord Hari, O my Lord Hari.” When the night came to an end, the prostitute was restless. Seeing this, Haridasa Thakura spoke to her as follows. “I have vowed to chant ten million names in a month. I have taken this vow, but now it is nearing its end. I thought that today I would be able to finish my performance of yajna, my chanting of the Hare Krsna mantra. I tried my best to chant the holy name all night, but I still did not finish. Tomorrow I will surely finish, and my vow will be fulfilled. Then it will be possible for me to enjoy with you in full freedom.”

The prostitute returned to Ramachandra Khan and informed him of what had happened. The next day she came earlier, at the beginning of the evening, and stayed with Haridasa Thakura. After offering obeisances to the tulasi plant and Haridasa Thakura, she sat down on the threshold of the room. Thus she began to hear Haridasa Thakura’s chanting, and she also personally chanted “Hari, Hari,” the holy name of the Lord. “Today it will be possible for me to finish my chanting,” Haridasa Thakura informed her. “Then I shall satisfy all your desires.” The night ended while Haridasa Thakura was chanting, but by his association the mind of the prostitute had changed.

The prostitute, now purified, fell at the lotus feet of Haridasa Thakura and confessed that Ramachandra Khan had appointed her to pollute him. “Because I have taken the profession of a prostitute,” she said, “I have performed unlimited sinful acts. My lord, be merciful to me. Deliver my fallen soul.” Haridasa Thakura replied, “I know everything about the conspiracy of Ramachandra Khan. He is nothing but an ignorant fool. Therefore his activities do not make me feel unhappy. On the very day Ramachandra Khan was planning his intrigue against me, I would have left this place immediately, but because you came to me I stayed here for three days to deliver you.”

The prostitute said, “Kindly act as my spiritual master. Instruct me in my duty by which to get relief from material existence.” Haridasa Thakura replied, “Immediately go home and distribute to the brahmanas whatever property you have. Then come back to this room and stay here forever in Krsna consciousness. Chant the Hare Krsna mantra continuously and render service to the tulasi plant by watering her and offering prayers to her. In this way you will very soon get the opportunity to be sheltered at the lotus feet of Krsna.”

After thus instructing the prostitute about the process of chanting the Hare Krsna mantra, Haridasa Thakura stood up and left, continuously chanting “Hari, Hari.” Thereafter, the prostitute distributed to the brahmanas whatever household possessions she had, following the order of her spiritual master. The prostitute shaved her head clean in accordance with Vaisnava principles and stayed in that room wearing only one cloth. Following in the footsteps of her spiritual master, she began chanting the Hare Krsna maha-mantra 300,000 times a day. She chanted throughout the entire day and night. She worshiped the tulasi plant, following in the footsteps of her spiritual master. Instead of eating regularly, she chewed whatever food she received as alms, and if nothing was supplied she would fast.

Thus by eating frugally and fasting she conquered her senses, and as soon as her senses were controlled, symptoms of love of Godhead appeared in her person. Thus the prostitute became a celebrated devotee. She became very advanced in spiritual life, and many stalwart Vaisnavas would come to see her. Seeing the sublime character of the prostitute, everyone was astonished. Everyone glorified the influence of Haridasa Thakura and offered him obeisances.

Ramachandra Khan ordered the servant to dig up the dirt in the place where Nityananda Prabhu had sat. To purify the Durga-mandapa temple and the courtyard, Ramachandra Khan sprinkled and smeared it with water mixed with cow dung, but still his mind was unsatisfied. Ramachandra Khan’s business was questionable, for he tried to avoid paying income tax to the government. Therefore the government’s minister of finance was angry and came to his residence. The Mohammedan minister made his residence in the Durga-mandapa of Ramachandra Khan. He killed a cow and cooked the meat at that very place. He arrested Ramachandra Khan, along with his wife and sons, and then he continuously plundered the house and village for three days. In that very room he cooked the flesh of a cow for three consecutive days. Then the next day he left, accompanied by his followers. The Mohammedan minister took away Ramachandra Khan’s position, wealth and followers. For many days the village remained deserted. Wherever an advanced devotee is insulted, for one man’s fault the entire town or place is afflicted.

4 Responses to The Story of Haridasa Thakur and Ramachandra Khan 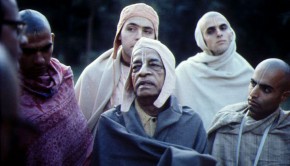 Service. There is no question of inferior or superior. →

Getting out of the mode of Ignorance (MP3 Audio) →