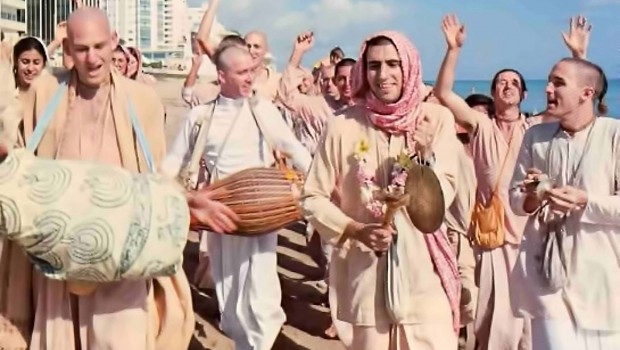 You’d probably never think this picture shows people practicing yoga. But chanting the names of God is actually the supreme form of yoga. Of course, devotees chanting Hare Krishna certainly don’t look much like yogis. At least not the kind of yogis most people think of when they hear the word. But most people, it seems, have little understanding of what yoga is really all about.

Yoga is a Sanskrit word meaning “union.” India’s ancient Sanskrit literatures, the Vedas, explain that the purpose of yoga is to purify our consciousness so that we can re-establish our eternal relationship with God. The sitting postures and breathing exercises most people associate with yoga are part of a certain type of yoga system–known as hatha-yoga–that was practiced thousands of years ago. By practicing hatha-yoga, great sages could completely withdraw their mind and senses from the material world and, after a very long time, find God within their hearts.

In this age, though, the Vedas discourage us from trying to reach God by following the hatha-yoga system. We just don’t have the time or the determination. But in another way we’re fortunate, because in this age God, or Krishna, has come in the form of His holy name. To associate with Him, we simply have to chant His name. The goal of yoga, union with God, is easily attained through chanting Hare Krishna. And unlike other forms of yoga, the results come quickly. So, you too can be a yogi. Just try chanting Hare Krishna–and feel yourself coming closer to God.

4 Responses to These People are Practicing Yoga?