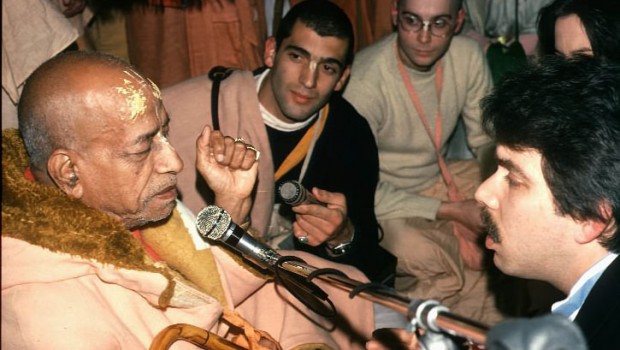 In a statement delivered at a press conference in Los Angeles in December of 1968, Srila Prabhupada challenges the world’s intellectual leaders to review their definition of what constitutes life. In the background of this body you can find the soul, whose presence is perceivable by dint of consciousness. Similarly, in the universal body of the cosmic manifestation, one can perceive the presence of the Supreme Lord, or the Absolute Truth,

The International Society for Krishna Consciousness is a movement aiming at the spiritual reorientation of mankind through the simple process of chanting the holy names of God. The human life is meant for ending the miseries of material existence. Our present-day society is trying to end these miseries by material progress. However, it is visible to all that in spite of extensive material progress, human society is not peaceful.

The body is changing–from one form to another–but the spirit soul is existing eternally, without changes. This fact we can experience even in our own life. Since the beginning of our material body in the womb of our mother, our body has been changing from one shape to another at every second and at every minute. This process is generally known as “growth,” but actually it is a change of body.

On this earth we see change of day and night and change of season. The more primitive mentality attributes this phenomenon to changes occurring in the sun. For example, in the winter primitive people think the sun is getting weaker, and at night they presume, sometimes, that the sun is dead. With more advanced knowledge we see that the sun is not changing at all in this way. Seasonal and diurnal changes are attributed to the change of the relative positions of the earth and the sun.

Similarly, we experience bodily changes: from embryo to child to youth to maturity to old age to death. The less intelligent mentality presumes that after death the spirit soul’s existence is forever finished, just as primitive tribes believe that the sun dies at sunset. Actually, however, the sun is rising in another part of the world. Similarly, the soul is accepting another type of body. When the body gets old like an old garment and is no longer usable, the soul accepts another body, just as we accept a new suit of clothes. Modern civilization is practically unaware of this truth.

People are enamored of the glittering manifestation of the cosmic body or the individual body, but they do not try to understand the basic principle of this glittering situation. The body looks very beautiful, working with full energy and exhibiting great traits of talent and wonderful brainwork. But as soon as the soul is away from the body, this entire glittering situation of the body becomes useless. Even the great scientists who have offered many wonderful scientific contributions have been unable to trace out the personal self, which is the cause of such wonderful discoveries.

An individual soul is understood in three aspects: first as the consciousness pervading the entire body, then as the spirit soul within the heart, and ultimately as a person. Similarly, the Absolute Truth is first realized as impersonal Brahman, then as localized Supersoul (Paramatma), and at the end as the Supreme Personality of Godhead, Krsna. Krsna is all-inclusive. Or in other words, Krsna is simultaneously Brahman, Paramatma, and the Personality of Godhead, just as every one of us is simultaneously consciousness, soul, and person.

The Krsna consciousness movement upholds the individuality of the soul and the Supreme Soul. From the Vedic Upanisads we can understand that both the Supreme Person, or God, and the individual person are eternal living entities. The difference is that the supreme living entity, or Supreme Person, maintains all the innumerable other living entities. In the Christian way of understanding, the same principle is admitted, because in the Bible it is taught that the contingent entities should pray to the Supreme Father so that He may supply means of maintenance and give pardon for their sinful activities.

So it is understood from every source of scriptural injunction that the Supreme Lord, or Krsna, is the maintainer of the contingent living entity and that it is the duty of the contingent entity to feel obliged to the Supreme Lord. This is the whole background of religious principles. Without these acknowledgments there is chaos, as we find in our daily experience at the present moment.

Everyone is trying to become the Supreme Lord, either socially, politically, or individually. Therefore there is competition for this false lordship, and there is chaos all over the world–individually, nationally, socially, collectively. The Krsna consciousness movement is trying to establish the supremacy of the Absolute Personality of Godhead. One who has attained a human body and intelligence is meant for this understanding, because this consciousness makes his life successful.

This Krsna consciousness movement is not a new introduction by mental speculators. Actually, this movement was started by Krsna Himself. On the Battlefield of Kuruksetra, at least five thousand years ago, the movement was presented by Krsna in the Bhagavad-gita. From Bhagavad-gita we can also understand that He had spoken this system of consciousness long, long before–at least forty million years ago–when He had imparted it to the sun-god, Vivasvan.

So this movement is not at all new. It is coming down in disciplic succession and from all the great leaders of India’s Vedic civilization, including Sankaracarya, Ramanujacarya, Madhvacarya, Visnu Svami, Nimbarka, and lately, about 480 years ago, Lord Caitanya. The disciplic system is still being followed today. This Bhagavad-gita is also very widely used in all parts of the world by great scholars, philosophers, and religionists. But in most cases the principles are not followed as they are. The Krsna consciousness movement presents the principles of the Bhagavad-gita as they are–without any misinterpretation.

Activities in the material nature are different from activities in the spiritual nature. Though the spirit soul is eternal (as we have explained), activities performed under the influence of the material nature are temporary. The Krsna consciousness movement aims at placing the spirit soul in his eternal activities. We can practice eternal activities even when we are materially engaged. To act spiritually simply requires direction, but it is possible, under the prescribed rules and regulations.

One Response to Understanding the Living Force

Finding The Origin of Life →