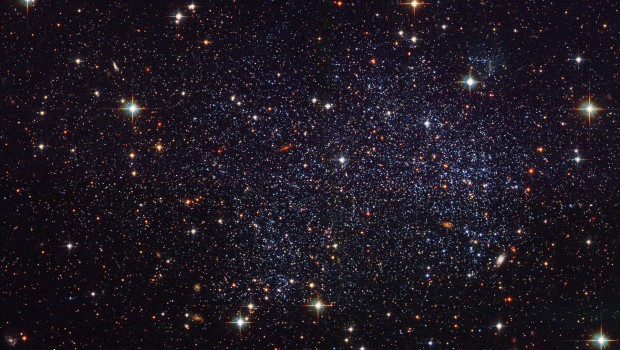 Get your head around this: the Universe had no beginning and it will have no end. Two scientists have put forward a new model to explain how the cosmos is and where it might be going.

They say it is necessary to take account of startling recent discoveries such as the observation that everything in the Universe is moving apart at an accelerating rate.Paul Steinhardt and Neil Turok propose that the cosmos goes through an endless cycle – of Big Bang, expansion and stagnation – driven by an as yet unexplained “dark energy”.

They have put forward their views in the journal Science.

The current model of the Universe starts with a Big Bang, a mighty explosion of space, matter and time about 14 billion years ago.

This model accounts for several important features we see in the Universe – such as why everything looks the same in all directions and the fact that the cosmos appears “flat” (parallel lines would never meet however long).But the model has several shortcomings, Steinhardt and Turok say.

It cannot tell us what happened before the Big Bang or explain the eventual fate of the Universe. Will it expand forever or stop and contract?

Problems with these futures became apparent in 1998, when studies of distant, exploding stars showed the Universe was expanding at an accelerating rate. It was a big surprise for some astronomers who thought everything might eventually come back together in a “Big Crunch”.

The apparent acceleration has since been checked and shown to be real.

It led cosmologists to revive an old idea that some “dark energy” is at work in the cosmos, pushing everything apart.

Steinhardt and Turok put this energy – a scalar field as they mathematically describe it – right at the centre of their new model.

They think the dark energy drives a cycle of activity that includes a big bang and a subsequent period of expansion that leaves the Universe smooth, empty and flat.

“The scalar field changes its character over time,” Paul Steinhardt told the BBC. “Finally, the field begins to build up energy to a point where it suddenly becomes unstable and bursts into matter and radiation, filling the Universe, and driving the next period of expansion.”

He added: “In the standard picture, it’s presumed that the Big Bang is actually a beginning of space and time; that there was nothingness, and then suddenly out of nothingness there sprang space, time, matter, radiation, etcetera.

“What we’re proposing in this new picture is that the Big Bang is not a beginning of time but really just the latest in an infinite series of cycles, in which the Universe has gone through periods of heating, expanding, cooling, stagnating, emptying, and then re-expanding again.”Steinhardt and Turok have discussed their ideas with peers and have received a positive, but “cautious”, response. “The ultimate arbiter will be Nature,” they write in the journal Science.

“Measurements of gravitational waves and the properties of dark energy can provide decisive ways to discriminate between the two pictures observationally.”

Cosmology writer Marcus Chown concedes it will be extremely difficult to finally prove any model of the Universe.

“The history of cosmology is the history of us being completely wrong,” he told the BBC. “I mean, cosmology is the hardest of all sciences; we sit on this tiny planet in the middle of this vast Universe, we can’t go anywhere and do any experiments – all we can do is pick up the light that happens to fall on us and deduce some things about the Universe.”

5 Responses to Universe in ‘Endless Cycle’