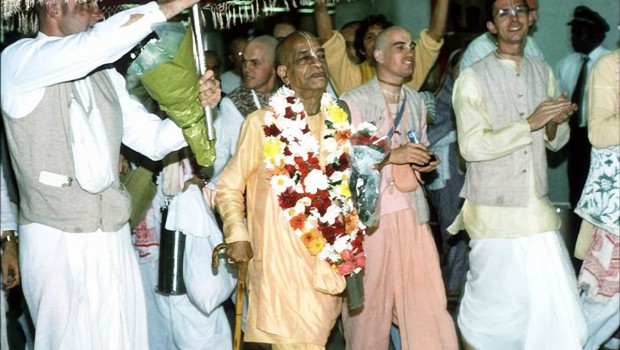 I offer my respectful obeisances unto the lotus feet of my spiritual master His Divine Grace A.C.Bhaktivedanta Swami Srila Prabhupada who is very kindly engaging me in his missionary activities of spreading the teachings of Lord Krsna and Lord Krsna Caitanya Mahaprabhu.

Today is ekadasi, Sunday, and I was supposed to go to Seattle for Hari Nama and a feast program following that. However due to various reasons , I cannot do that service on this day. As far as I can remember , we here at Sri Sri Gaura Nitai Mandir, have without fail, prepared a lavish feast, presented the Deities very nicely, and given Bhagavad gita class and kirtans every Sunday for almost the last ten years. Because of some minor problems, it had to be cancelled this week.

Although, this one week of not doing the regular program, is inconsequential in the light of ten years’ of programs, I consider it my own misfortune.

To be used by a pure devotee of the Lord in a way that is pleasing to him, is the greatest fortune. God is great they say, and His intimate associates are directly protected by Him, for only they know how great He really is.

When the Lord or His pure devotees are out of sight, it causes a great upheaval for the confidential ones.

Similiarly, even for neophytes, when our “regular” service is taken away for one reason or another, it can cause pain or agitation in the mind of the disciple.

We all remember the devotional service we rendered to Srila Prabhupada while he was physically here, and are very fond at times, especially at sunday feast programs, of reminiscing of these times to others. So when that service was taken away by “various forces”, we became morose, despondent, and later, lost sight of the original goal for which we originally set out upon when joining the Hare Krsna movement–KRSNA!!!

By that devotional service to Srila Prabhupada, we become attracted to the Personality of Godhead. By that humble service, we get an attraction for chanting our minimun 16 rounds every day; by that service, we become enlivened to read these great books he left for us; by that service we are able to constantly remember what this life is really for, and as a result, never forget, what we are here for.

The Srimad Bhagavatam states, by serving great souls who are completely free of vice, great service is done, and by such service, one gains an attraction for the Lord.

But serving souls who are not completely free from vice, does not guarantee one the same attraction to the Lord. Rather as Nectar of instruction states, one cannot advance very well toward the goal–KRSNA.

Yesterday I received an email from some devotees on a Hare Krsna farm in the USA. They told us that only the ones who were accepting Srila Prabhupda as their guru had any attraction to reading his books. The rest did not. I was also told once by a devotee from the Bhaktivedanta archives, that he liked to go where Prabhupadanugas gathered because he knew he could sell them some vedabase folios because as he said, the “Prabhupadanugas were the ones most interested in reading Prabhupadas books”.

And isn’ this the real proof?? Who is becoming attracted to the Personality of Godhead?

Therefore, Srila Prabhupada, this vyasa puja offering is again, my humble self thanking you again, for allowing me to remain as your very insignificant servitor and again, I ask that you never kick me away from your lotus feet–lifetime after lifetime.