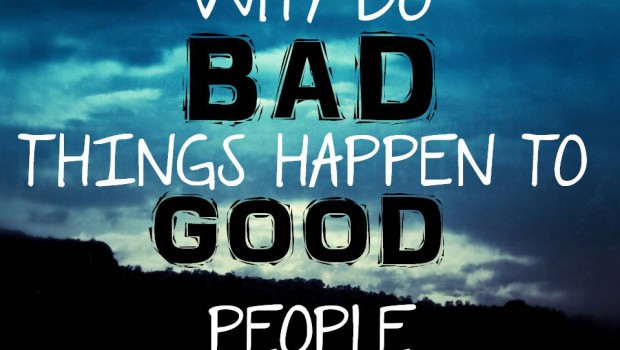 From your views Why do ‘bad’ things befall us? How does all that come into play? Is everything karma or can anything just happen? How would a KC devotee deal with let’s say he’s on the road preaching and someone stabs him badly, how would you view that? Or would you say that while in KC it would not be possible to be stabbed because Krishna is watching over us, especially

We know the soul is eternal. We are on a journey. And this life is but one small step in that journey. You could think of a motion picture which is on big, big reels of film made up of millions of frames. So our journey is like the entire motion picture and this life is but one frame out of the total movie. So what happens in this frame is a continuation of what happened in the previous frame and what we do in this frame will effect what happens in the next frame. So bad things do not happen to good people. They may have been good in this life but if bad things are happening we can see it is the result of some bad action they have performed in the past; in this life or in previous lives.

There is no such thing as “chance.” In Sanskrit there is not even a word that means “chance.” The concept does not even exist. The closest thing they have is “adrsti” which means “the cause is unknown.” So if something bad and unexpected happens they will not say it happened “by chance” they will say “the cause is unknown.” Which means it happened for some reason but we do not know what that reason is…

But that does not mean that if we are devotees and we see someone coming to stab us we will just put our arms up in the air and say: “It’s Krishna’s mercy” and let him stab us. No. A devotee can fight also. If someone is coming to attack him then he can protect himself of course. After all this body belongs to Krishna and we are using it to serve Krishna so if someone is trying to damage it if they succeed that will make it more difficult for us to serve Krishna. So we have to try and stop them. Also if they are attacking the other devotees we have to stop them.

So we are not, like the Buddhists, non-violent. Sometimes violence is necessary. Actually in the Vedic system there is a whole class of men called ksatryias. That means “to protect from hurt.” So these ksatryias are meant for using violence to protect the other members of the society when it is necessary. Non-violence is not a practical philosophy.

So on to your second point of “do bad things happen to devotees.” The answer is that “bad things” certainly do happen to devotees sometimes. Look at Lord Jesus Christ. His followers nailed him onto a cross. Or at least his followers did not protest while he was being nailed onto a cross. That is quite bad. And in the history of Krishna consciousness some very great souls have had to undergo some very difficult situations. But Krishna does protect his devotees, that is for sure. There is one case of Haridas Thakura. He was a great devotee and follower of Lord Caitanya who is Krishna himself and who appeared in India five hundred years ago. Because Haridas was a great devotee many people were attracted to him and he became very famous and highly respected. He became even more famous than the King of that time. So the King became very envious of Haridas. He did many things. But one thing is he had Haridas arrested and taken to 22 different market places and had him severely whipped in every market place. Such a punishment would ordinarily be a death sentence as no ordinary man could survive such a whipping. But Haridas said after it that he felt no pain. And later on the devotees saw on the back of Lord Caitanya all the whip marks. So Lord Caitanya had protected his devotee Haridas…

There is also Prahlada Maharaja, the son of a great demon, Hiranyakasipu. Hiranyakasipu was trying to train Prahlada to be a big demon and sent him to the school with all the other demon’s children to be taught politics and diplomacy. But Prahlada was a devotee of Krishna from birth and as soon as the teachers went out of the classroom he would jump up and preach Krishna consciousness to all the other boys in the school. So gradually the whole school, all sons of demons, started to become devotees of Krishna…. So it is a long story but Hiranyakasipu became very angry at Prahlada because he had become a devotee of Krishna and he tried to kill Prahlada in so many ways. He threw Prahlada off a big high cliff but the rocks at the bottom turned into feathers and cushioned Prahlada’s fall. He threw Prahlada into a pit full of deadly snakes and scorpions. But they did not bite Prahlada. He had a huge elephant trample on Prahlada. But he was not hurt. He put Prahlada in a big pot of boiling oil. But Prahlada did not die… So he was completely frustrated. And back in his palace he asked Prahlada: “Where do you get your strength from?” And Prahlada replied “The same place you get your strength from, Krishna…” Hiranyakasapu could see Prahlada was not at all afraid of him and he knew it was because of Prahlada’s faith in Krishna. So he asked Prahlada: “Is your God everywhere?” Prahlada said: “Yes” So looking at a huge pillar in the palace Hiranyakasipu said: “Is your God in this pillar?” Prahlada said: “Yes.” So Hiranyakasapu took a big hammer and smashed the pillar and Lord Krishna, in the form of half-man, half-lion appeared out of the pillar. And Krishna as Lord Narasimhadeva killed the demon Hiranyakasapu and saved His pure devotee Prahlada Maharaja…

But Haridas and Prahlada are very special and we can not expect Krishna to do like that for us. But it is true that Krishna protects his devotees and for devotees things no longer simply work on karma. We may have done so many bad things in the past that we should be suffering for now, but because we are trying to be Krishna conscious and are trying to serve Krishna, Krishna changes our karma. So a devotee is not like an ordinary person in this regard. But still we have this material body and it will get old, it will get sick and it will die. There is no getting around that. But a devotee has a different consciousness. He knows he is not the body and even though the body may be going through some troubles, he is not troubled, because he has realized he is not the body…

Still even pure devotees like Jesus can die “horrible deaths.” But in that case there is some plan of Krishna involved. Pure devotees are sometimes killed as was Jesus. He was killed by the Jews who were envious of his popularity and because he preached against the existing religious men. He went to the Jewish churches and told the people “the only way to God is through me…” So he was telling them that these Scribes and Pharisees could not help them get to God at all. If they wanted God they had to listen to him. So it did not make him very popular with the religious leaders of the Jews. So they had him killed. And this is a pattern that repeats. If one becomes a truly spiritual person and preaches so many people will become his enemy. There is even a good chance that Srila Prabhupada was poisoned by some of his “followers” and it seems his spiritual master was also poisoned by some of his “followers.” Both Prabhupada and his spiritual master Srila Bhaktsiddhanta were very powerful preachers who upset a lot of the “caste Brahmins” who are the priestly class in India. They claim one can only become a Brahman [spiritually advanced] by being born in a Brahmin’s family. But this is not what the Vedas says. And both Srila Prabhupada and his spiritual master made this widely known. So even though a pure devotee is the friend of everyone by his preaching naturally demoniac people become envious of him.

So I hope it is of some help. Basically there is no chance. Nothing happens by chance. There is a cause for everything, “Innocent” people do not die horrible deaths. The cause is generally our bad karma, bad things happen to us because of the bad things we have done in the past in this life and in previous lives. There is nothing an ordinary person can do about this. The analogy is given of a seed. You plant a seed and after some time it will germinate and grow. So it is with our sinful activities. It is like planting a seed in our heart. In due course of time that seed will germinate and grow and we will have to then suffer the reaction to that sinful activity. Like seeds these sinful reactions take different amounts of time to germinate. Some, like a big tree, may take many many years, others, like wheat, may germinate quite quickly.

And if, at the time of death, we still have these seeds within our hearts waiting to germinate we have to take another birth in the material world so they can germinate and we will enjoy or suffer the results… And when we take another birth we will again do so may sinful and pious activities which will sow more seeds in our heart and we will have to come back to the material world again and again and again… practically forever.

The way out of course is chanting Hare Krishna. This chanting destroys the seeds of our sinful activities in our hearts so they will not germinate in the future and if we can keep ourselves engaged in Krishna conscious activities we will not sow more seeds in our hearts so at the time of death there will be no seeds in our hears waiting to germinate so we do not have to take another birth in the material world–we can go back home back to Godhead and get our original eternally youthful spiritual body full of knowledge and bliss…

So why not chant Hare Krishna and be happy?

42 Responses to Why do Bad Things Happen to Us?