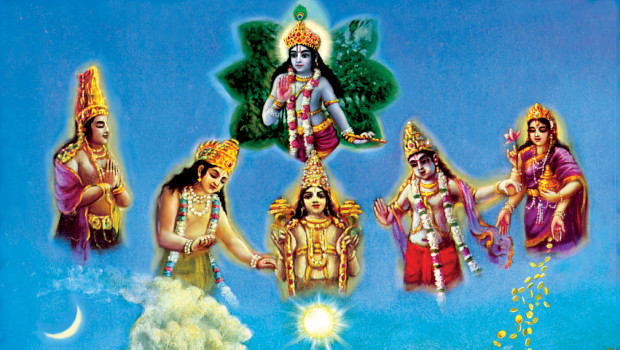 We are living in the material world and every aspect of this world is being managed and maintained by intelligent persons. That is our experience here. If you go into some large department store it is not that everything is going on automatically. No. There is a managing director, and he has many department managers and all the department managers have a group of workers they supervise and in this way all the activities of the big department store are going on.

Many materialistic persons become attached to worshiping these demigods to get some temporary, materialistic benefits. Krishna discusses this demigod worship in Bhagavad-gita:

“Those whose minds are distorted by material desires surrender unto demigods and follow the particular rules and regulations of worship according to their own natures.” (Bhagavad-gita 7.20)

Less intelligent people who have lost their spiritual sense take shelter of demigods for immediate fulfillment of material desires. Generally, such people do not go to the Supreme Personality of Godhead, because they are in ignorance and passion and therefore worship various demigods. Worshipers of demigods are motivated by small desires and do not know how to reach the supreme goal.

In Vedic literature there are recommendations for worshiping different gods for different purposes (e.g., a diseased man is recommended to worship the sun), those who are not devotees of the Lord think that for certain purposes demigods are better than the Supreme Lord. But a pure devotee knows that the Supreme Lord Krishna is the master of all. In the Caitanya-caritamrta it is said that only the Supreme Personality of Godhead, Krishna, is master and all others are servants. Therefore a pure devotee never goes to demigods for satisfaction of his material needs. He depends on the Supreme Lord. And the pure devotee is satisfied with whatever He gives.

I am in everyone’s heart as the Supersoul. As soon as one desires to worship the demigods, I make his faith steady so that he can devote himself to some particular deity. (Bhagavad-gita 7.21)

God has given independence to everyone; therefore, if a person desires to have material enjoyment and wants very sincerely to have such facilities from the material demigods, the Supreme Lord, as Supersoul in everyone’s heart, understands and gives facilities to such persons. As the supreme father of all living entities, He does not interfere with their independence, but gives all facilities so that they can fulfill their material desires.

Some may ask why the all-powerful God gives facilities to the living entities for enjoying this material world and so lets them fall into the trap of the illusory energy. The answer is that if the Supreme Lord as Supersoul does not give such facilities, then there is no meaning to independence. Therefore He gives everyone full independence–whatever one likes–but His ultimate instruction we find in the Bhagavad-gita: man should give up all other engagements and fully surrender unto Him. That will make man happy.

Generally, persons who are distressed in the material world go to the demigods, as they are advised in the Vedic literature. A person wanting some particular thing may worship such and such a demigod. For example, a diseased person is recommended to worship the sun-god; a person wanting education may worship the goddess of learning, Sarasvati; and a person wanting a beautiful wife may worship the goddess Uma, the wife of Lord Siva. In this way there are recommendations in the sastras (Vedic scriptures) for different modes of worship of different demigods. And because a particular living entity wants to enjoy a particular material facility, the Lord inspires him with a strong desire to achieve that benediction from that particular demigod, and so he successfully receives the benediction.

Endowed with such a faith, he seeks favors of a particular demigod and obtains his desires. But in actuality these benefits are bestowed by Me alone. (Bhagavad-gita 7.22)

A living entity goes to the demigods usually because he is mad to fulfill his lust. This happens when something undue is desired by the living entity, and the Lord Himself does not fulfill the desire. In the Caitanya-caritamrta it is said that one who worships the Supreme Lord and at the same time desires material enjoyment is contradictory in his desires. Devotional service of the Supreme Lord and the worship of a demigod cannot be on the same platform because worship of a demigod is material and devotional service to the Supreme Lord is completely spiritual.

For the living entity who desires to return to Godhead, material desires are impediments. A pure devotee of the Lord is therefore not awarded the material benefits desired by less intelligent living entities who prefer to worship demigods of the material world rather than engage in devotional service of the Supreme Lord.

Here it is clearly stated that the worshipers of demigods go to the different planetary systems where various demigods are situated, just as a worshiper of the sun achieves the sun or a worshiper of the demigod of the moon achieves the moon. Similarly, if anyone wants to worship a demigod like Indra, he can attain that particular god’s planet. It is not that everyone, regardless of whatever demigod is worshiped, will reach the Supreme Personality of Godhead. That is denied here, for it is clearly stated that the worshipers of the demigods go to different planets in the material world, but the devotee of the Supreme Lord goes directly to the supreme planet of the Personality of Godhead.

If one knows that both the demigods and himself are part and parcel of the Supreme Lord, his knowledge is perfect. But if he does not understand this, he achieves different planets where the demigods reside. This is not the same destination the devotee reaches.

63 Responses to Worshiping the Demigods

Krishna is an Incarnation of Maha-Visnu? There is No Krsnaloka?? →