You will see the power of Hare Krishna movement in due course of time... | Krishna.org
Devotees 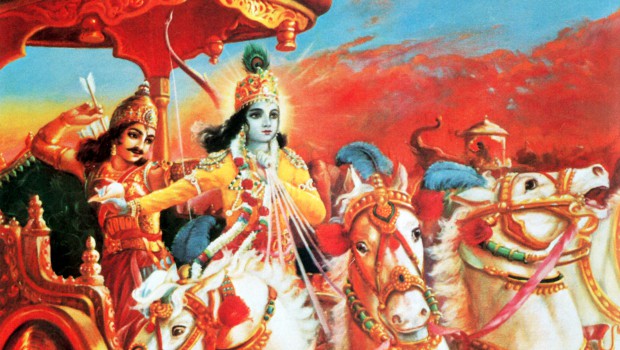 So the devotees of Krsna should be trained up both ways: not only to give protection to the devotees, to give them encouragement, but if need be, they should be prepared to kill the demons. That is Vaisnavism. It is not cowardism.

Pradyumna: “Translation: There are the mighty Yudhamanyu, the very powerful Uttamauja, the son of Subhadra and the sons of Draupadi. All these warriors are great chariot fighters.”

“Translation: O best of the brahmanas, for your information, let me tell you about the captains who are especially qualified to lead my military force.”

Prabhupada: So formerly, five thousand years ago, the same system, military–ordinary soldiers, then the captain, then the commander, the commander-in-chief–as there are gradations in the modern age, the same thing was there. But maha-ratha, they had good qualification. Maha-ratha means alone he could fight with many other charioteers. They are called ati-ratha, maha-ratha. There are different grades of fighters.

So, so far Pandavas are concerned, their son. Saubhadra… Saubhadra means Abhimanyu, Subhadra’s son. Because he was Subhadra’s son, his name was Saubhadra. Draupadi’s sons, they are called Draupadeya. In Sanskrit, just like bhagini, sister, bhagini, her son is called bhagineya, nephews. So there is link. As soon as we speak Saubhadra, that means Subhadra’s son. Subhadra’s son, he was only sixteen years old at that time. He was married with Uttara, the daughter of Maharaja Virata. So they were all maha-rathas, ordinary, not ordinary fighters. This Abhimanyu was killed by conspiracy by seven commander-in-chief. Bhisma, Karna, Dronacarya, Asvatthama, they all surrounded him, and they did not allow him to come out. They were very experienced commanders. So this is ksatriya spirit. He was simply a boy, sixteen years old and he had to be killed by the combined efforts of very, very, big commander-in-chiefs. He was so great fighter, Abhimanyu. Abhimanyu-vada (?). So Saubhadra, Draupadi… Similarly, Draupadi’s sons also there. Sarva eva maha-rathah. Maha-ratha means one who could fight with one thousand chariots on the other side. They were called maha-rathah.

Then Duryodhana, first of all he pointed out the military strength of the opposite side. This is intelligence. One should take calculation of the opposing elements or the enemy’s side. In fighting the first thing is to take estimation of the enemy’s side, how much they are strong, how they have arranged. Then one should calculate how to counteract, how to fight with them, this is intelligence. Without taking any calculation of the other side, if you are not prepared, then how you can become victorious? This is sane proposal, that is, upayan cintayet prajno apayan ca cintayet.. A prajna, an intelligent man, not only think of the bright side on this business, or this fight, or this any…, so many things we have to deal with. Simply we should not calculate the brighter side. There is darker side also. We should always think, “If there is some thief, if there is some rogue, they cheat us, then what precaution I am going to take?” This is intelligence. If I simply calculate that “In this business I will make so much profit.” In the meantime, somebody comes and cheats me and go away, then… Therefore upayan cintayet prajna apayan ca cintayet. Darker side also should be thought of. That is intelligence. Just like they are doing. After calculating the darker side–enemy means darker side–they can defeat me at any moment. That is darker side.

So after calculating their strength, then Duryodhana is speaking about his own strength, asmakam tu visista ye. Visista, not to speak of the ordinary soldiers. They’re visista. Visista means who are specifically to be mentioned, high officers. Asmakam tu visista ye tan nibodha dvijottama. He was in commander-in-chief. For eighteen days there was fight, and one after another, a commander-in-chief was killed. And sixty-four crores of men were killed in the Battlefield of Kuruksetra. And the battle was finished within eighteen days, not lingering for some years. No. Fight to the best capacity and finish the business.

So everyone, both the sides, Pandava’s side and Kaurava’s side, all were killed. This Saubhadra, Draupadeya, everyone was killed. And the other side also. Only the five brothers they remained, and the one grandchild who was in the womb of the mother, he remained. Otherwise everyone was finished within eighteen days. Such a great fight it was. And people from all parts of the world, they joined the Battle of Kuruksetra.

Somebody was criticizing me that “Swamiji, you are introducing this Hare Krsna movement. People are becoming coward. They simply chant Hare Krsna.” So I replied that “You will see the power of Hare Krsna movement in due course of time.” He required… Because there were two battles in India: the battle between Ravana and Rama, Rama-Ravana, the battle of Ramayana; and another battle was Battle of Kuruksetra. And in these two battles the hero was Vaisnava and Visnu. In the Rama-Ravana battle Lord Ramacandra was there and His devotee Hanuman, Vajrangaji. Similarly, in the Battlefield of Kuruksetra, Krsna was there and His devotee Arjuna was there. So Vaisnavas, they do not simply chant Hare Krsna. If there is need, they can fight under the guidance of Visnu and become victorious. A Vaisnava’s one qualification is… Out of the twenty-six qualifications, one qualification is daksa, expert. If there is need of fighting, they can fight like very expert. That is also needed. Krsna’s… Krsna consciousness does not mean one-sided. Krsna as all-pervading, the Krsna consciousness movement also should be all-pervading. It should touch everything, even politics, sociology, everything, if required. That is the aim. Because Krsna’s mission is: yada yada hi dharmasya glanir bhavati bharata, paritranaya sadhunam vinasaya ca duskrtam. There is two mission: not only to give protection to the devotees, but also to kill the demons. To kill the demons, that is one side. So the devotees of Krsna should be trained up both ways: not only to give protection to the devotees, to give them encouragement, but if need be, they should be prepared to kill the demons. That is Vaisnavism. It is not cowardism. It is not cowardism. When need be. Generally, a Vaisnava is non-violent. Just like Arjuna. In the beginning he was non-violent, Vaisnava. He said, “Krsna, what is the use of this fighting? Let them enjoy.” So by nature he was non-violent, but he was induced by Krsna to become violent, that “Your non-violence will not help. You become violent. You kill them. I want.” So if Krsna wants we shall be prepared to become violent also. And Krsna, that is open secret, that paritranaya sadhunam vinasaya ca duskrtam. Two business of Krsna, two side. So those who are devotees of Krsna, they should be trained up both ways, they should be prepared. But generally, there is no question of becoming violent, unnecessarily. As the modern politicians, unnecessarily they declare war, a Vaisnava does not do so. No, unnecessarily, there is no need of war. When it was completely impossible to settle up the things between the Pandavas and the Kauravas, then Krsna said, “All right, then there must be fight.” When Duryodhana declined to spare even a portion of land holding the sucyagra, the point of a needle… he refused that “I cannot spare even so much land which can hold the point of a needle.” Then the war was declared. There is no question of settlement. Otherwise, Krsna requested that “These five Pandavas, they are ksatriyas. They cannot become merchant or brahmana. Brahmana’s profession is pathana pathana yajana yajana dana pratigrahah. Brahmana can take charity from others. A sannyasi can take charity from others. Not a ksatriya or a grhastha. No. That is not allowed. “So they are ksatriyas; they cannot take the professions of a brahmana, neither they can take the profession of a mercantile man, business man. They must have some land so that rule over, take taxation. And that is their living means.

So spare only five villages to these five brothers and settle up.” But Duryodhana replied, “No, Sir. What to speak of five villages, we cannot spare even so much land which can hold the point of needle.” Then the war was declared. So Vaisnava, they are non-violent. But if need be, they can become violent for Krsna’s sake. This is the Battle of Kuruksetra. So any more? Or end here? All right, end here. Chant Hare Krsna. (End)