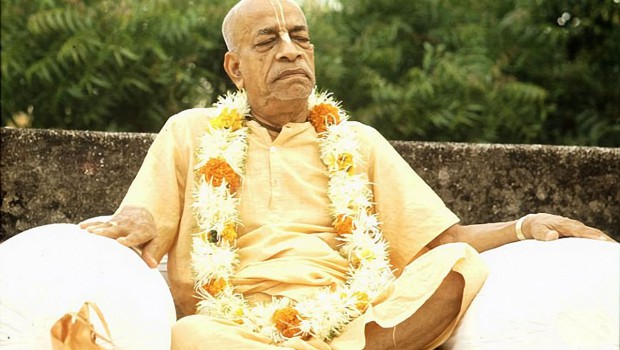 After six months in India Srila Prabhupada returned to the West by way of Hawaii. He remained on Oahu at New Nabadwip for one week. It was a very eventful stay. There was a great deal of agitation at this center because of the differences between the local authorities and that of Siddhaswarupa Ananda Goswami. The complaint was that Siddha did not follow Iskcon’s authority. Objections were brought to the attention of Srila Prabhupada’s secretary, Paramahamsa Swami. He went to Srila Prabhupada and explained some of the difficulties that were taking place. Srila Prabhupada said, “So, bring Siddhaswarup and we will have a meeting.”

Srila Prabhupada did not waste any time with formalities. After everyone was seated on the floor he unemotionally looked at Siddha and stated, very objectively, “So, the devotees here have some complaints against you.” Siddha smiled and replied, “What is that Srila Prabhupada?” Srila Prabhupada continued, “One thing, why you do not shave your head?” Siddha answered, “If I shave my head sometimes I get a cold.” Srila Prabhupada began chuckling and said, “In Hawaii, you get a cold?” Siddha replied, “Sometimes, Srila Prabhupada.” Srila Prabhupada suggested, “Then you can wear a hat. Then you will not catch cold. You are a sannyasi, other people are watching. It is important that you set a good example.”

Srila Prabhupada continued with another complaint, “Also, you do not carry your danda?” Siddha replied, “Well, they don’t usually let me carry it on airplanes, so it becomes difficult to travel around with it.” Srila Prabhupada countered, “We have so many sannyasis, everyone is carrying their danda. Paramahamsa, he is carrying a danda. He brings it on the plane.” Siddha answered, “Well, I have had many problems trying to get my danda on the plane.”

Srila Prabhupada calmly moved on to the next point of contention. Each issue became more serious. Srila Prabhupada said, “They say that your followers, they do not come here to see me, that they only see you. They only hear from and deal with you. They won’t come here?” Siddha replied, “If they want to come, they can come.” Srila Prabhupada quickly replied in a more authoritative voice, “But this is your business. It’s all right they may worship you if they like you very much, that’s all right. But your business is to bring them to me. You are my disciple. The duty of the disciple is to bring the devotees to the spiritual master. This is your business. Your preaching should be like this. If your preaching does not bring them to this point, then it is useless.” Siddha replied, “This is probably my defect. My preaching is not so good. Therefore they are not coming. But what can I do but try to preach to them.” Srila Prabhupada replied, “Well, if your preaching is insufficient, then better not to preach.”

As things became quiet a wave of courage washed over me. To keep the conversation moving I said, “Srila Prabhupada, I have one observation.” Srila Prabhupada nodded his head in approval and said, “Yes, go on.” I said, “For example, this morning in the temple room Siddhaswarupa Maharaja was giving the class. He was sitting along side of your Vyasasana and one of his people came up with a fresh flower garland and placed it on Siddhaswarupa. When I saw it happen, my mind became disturbed. In my opinion the garland should have been put on you, as there was no garland on your picture on the Vyasasana. I would think that the garland should have been put on the Vyasasana first.” Srila Prabhupada turned to Siddha and said, “He has a good point. That is correct. It is all right, they may have wanted to put it on you, but you should have directed them to put it on my picture.”

Srila Prabhupada finished the discussion not belaboring any point. He straightforwardly addressed the issue of following the instructions of the spiritual master and the relationship between Guru and disciple This final point wrapped up the meeting. We all offered obeisances and left the room of our Divine guide and loving Gurudeva. The next day Siddhaswarupa Maharaja visited Srila Prabhupada. Siddhaswarup gave Srila Prabhupada a $10,000 donation that one of his followers had given to him. This demonstrated his understanding of Srila Prabhupada’s instruction

You are the perfect transparent via media to your Guru Maharaja. You always accept service on his behalf. Because you were the perfect disciple you are completely qualified as the perfect spiritual master. You pass on the devotion and adoration of your disciples to the lotus feet of your Guru Maharaja. Srila Bhaktisiddhanta Saraswati Maharaja passes the fruits of your devotion to the lotus feet of his Guru Maharaja. So it goes on from Guru to Guru within the Guru paramapara up to the lotus feet of Lord Sri Krsna. I humbly pray to remain connected to your lotus feet always remembering that you are eternally my Lord and master. Except for your causeless mercy my life has no value or qualification. I beg that you allow me to eternally spread your glories. I pray to swim in the ocean of bliss that is available by remembering your eternal lila.