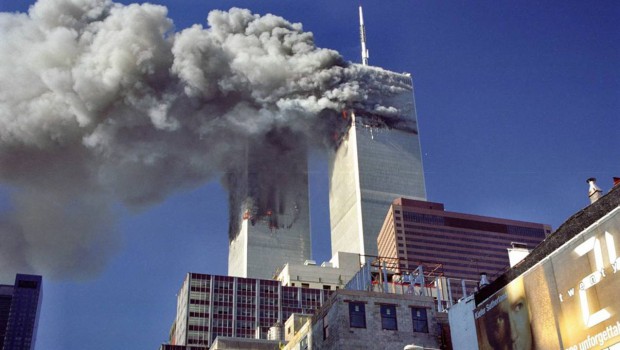 This terrorist event is actually the wake up call for all the Krishna Devotees of Prabhupada’s Society to transcend the “little sectarian differences” that have been creeping in.

I was moved to write down some thoughts about Krishna Consciousness in light of the events that transpired on the 11th of September 2001.  First off, please permit me to give the readers some background on how I personally came into the orbit of Srila Prabhupada’s teachings and Krishna Consciousness.

As a public high school teacher (and football coach!), I had the very good fortune of having some devotee children enrolled in my school district’s independent study program.  The way the program works is that students meet with me once a week for all their assignments, and then turn the work back in the following week.  This allows students the flexibility of pursuing subjects not offered in the regular curriculum, and also the time to work in family businesses, etc.  Anyway, by Krishna’s causeless mercy, I got to gradually associate more and more with this wonderful devotee family.  Now after about three years, I am holding bhakti yoga classes twice a week in my own home!  There is a growing number of young people here in my community who are realizing that the only way to solve their myriad problems is to chant the Holy Names of Krishna, and in their own individual fashions, to weave Prabhupada’s teachings into the fabric of their daily lives.

This summer, I was sent to a US History teacher workshop (on the Revolutionary War) in Valley Forge, Pennsylvania.  I decided that while I was back east, I should explore not only the origins of the United States, but of Krishna Consciousness in America!  So, with a dual “karmi/Krishna” angle of vision, I made plans to visit Washington DC, Philadelphia and Boston, along with Tompkins Square Park, 26th Second Avenue, New Vrindavana, Prabhupada’s Palace of Gold, etc.  Wow!  What an incredible “education” I received this summer.  I spent the entire month of August on the east coast.

It is truly amazing, how seeing the world through Prabhupada’s teachings just totally transforms your reactions to everyday people, places, and things.  I am working on getting my private pilots license, and being the son of an airline pilot, I thought for sure that a visit to the National Air and Space museum at the Smithsonian would be a real rush.  I have to admit that it held no fascination for me.  In fact, it was a very disturbing experience, especially in light of what Prabhupada had to say about America’s moon landings.  To witness thousands upon thousands of tourists just “ooing and awing” over the marvels of our scientific and technological achievements actually made me sick to my stomach.

Maya is so thick, so insidious, and so completely all consuming, that I realized; without the Holy Names, without Krishna Kirtan, this planet is a sinking ship of misery and suffering.  All I could do for relief was to quietly chant Hare Krishna to myself, and constantly think about what Prabhupada actually did for this planet’s suffering living entities, by personally risking everything he had for our benefit.  For an “All-American guy” like me to come to Krishna Consciousness relatively late in the game, (I’m 36 years old), it is still very uncomfortable at times to live here in America, knowing what I now know.  But fear not, the story definitely gets better from here!

After “doing the Capital thing” in DC under a full moon in Pisces, I made my way over to West Virginia to see a dear friend of mine who also happens to be a neophyte Krishna devotee- and get this– a Major in the United States Army!  We went together (on Janmastami) to see New Vrindavana and the Palace of Gold. While there, we met up with two wonderful devotees, Balabhadra das and his wife Chayadevi.  Obviously, the Palace of Gold was awe inspiring, and a beautiful tribute to our eternal Spiritual Master.

However, as an environmentally oriented educator, I was deeply moved with the Cow Protection work being done by these humble and dedicated devotees of Prabhupada.  Especially after the events of September 11, (and what they might signal with regard to global conflict), karmically speaking, Cow Protection takes on a whole new urgency.  I recall now where Prabhupada taught us that widespread animal slaughter is the cause of world wars.   So as we lurch ahead into the future of Kali Yuga after these terrorist actions, it is indeed a very profound thing to ponder.

Probably the most incredible and enlivening experience on this summer sojourn was what lay ahead for me in New York City itself!  By Krishna’s arrangement, I found myself at the St. Mark’s Place Sri Radha Govinda Temple, right in the thick of the lower east side!  I felt a deep historical significance being able to stay so close to the elm tree in Tompkins Square Park, where everything started back in 1966!  As luck would have it, the very first Harinam of my life started right there at the elm tree, with devotees coming from several different temples to join in.  It was an intense synchronicity for me that right after touring the capitol of the United States of America, I would be in the capitol of Krishna Consciousness in America!  We circled the elm tree several times, and then made our way all through the Bowery, finally ending up at the 26th Second Avenue Temple.  I got to walk into the back courtyard where that famous picture of Prabhupada standing next to a fountain was taken.  I thought to myself, “this is where history was made, not in Valley Forge or Philadelphia!”

But that’s not all!  I got to actually live for a week in the St. Mark’s Place temple, and finally experience “a sliver” of devotee life.  It was a very purifying experience for me, because up until that time, the daily reality of being out on the streets was all just a mental concept.  We would go out everyday and have kirtan, while distributing Prabhupada’s books.  New York is a wonderful place to preach Krishna Consciousness because overall, everyone really loves the Krishnas.

The week concluded with some very climactic events.  I got to join with several other devotees and have a rousing harinam in Times Square on a Saturday night, as well as chant Hare Krishna right down Madison Avenue in the India Day Parade!

I’d like to conclude this little story by saying that before I learned about Krishna Consciousness, (i.e. as a karmi), I really have “been there, and done that”.  I grew up in southern California and graduated from college at UC Santa Barbara, which is a real “party school” to be sure; where drinking alcohol and chasing girls are the focal points of life.  I’ve traveled the world many times over, made tons of money, played music on MTV, worked on a blockbuster film, hob-knobbed with boozing politicians at the National Republican Convention, scuba dived on the Great Barrier Reef, and basically done my fair share of wild, crazy and really stupid things early on in this lifetime.

So I can honestly say, with 100% conviction, that there is no single activity in this material world that is more thrilling, more enlivening, more blissful, more potent, more purifying, and utterly more important for the future of this planet than the congregational chanting of the Lord’s Holy Names!!!

I am making an urgent, honest, heartfelt plea to the Krishna Devotees of the world, but most especially to those in New York City!!!   Please, as Srila Prabhupada’s followers, let us converge in large numbers upon this disaster zone of America, and bombard the atmosphere with the Holy Names of KRISHNA.

If other karmi groups can organize everything from “million man marches”, to gay pride parades to Super Bowls, why can’t all the different temple groups of Hare Krishnas re-energize Lord Caitanya’s Sankirtan Movement, and zero in on New York City?  This is a perfect “launch window” of opportunity!

It’s no coincidence that Srila Prabhupada chose New York as the epicenter of Krishna Consciousness in the western world.  New York City sets the pace for the rest of the world in every sphere of activity, from finance and fashion, to art, music and cuisine.  If we could stage kirtans around the clock all through the city, with special focus around the damaged areas, we could not only help to counteract the glaring effects of Maya, but we could also gather international media attention on Prabhupada’s Movement!

This terrorist event is actually the wake up call for all the Krishna Devotees of Prabhupada’s Society to transcend the “little sectarian differences” that have preoccupied and stagnated the movement!  This in-house quarreling has not only turned-off multitudes of potential new devotees, but it has kept devotees from the real work that is so urgently needed, RIGHT NOW, which is widespread, intensive, and focused efforts to invade New York City with Krishna Kirtans!!!  As an ex football coach, believe me!  There’s nothing like a “COMEBACK KID”!

Why not start a massive, second wave of Krishna Consciousness in America?    With a constant onslaught of kirtans all over the city, devotees could get media coverage on Larry King Live, Oprah Winfrey, 20/20, Nightline, you name it!  (Besides, all the other religious groups are banding together to pray for the victims of the terrorist disaster, and they’re getting media attention!)  So, it is in this spirit of national urgency that I urge all the leaders of ISKCON, plus any and all other Krishna groups to unite in the Holy Names, and really BOMB New York with the one sound that can end all quarreling and dissention:

Thank you all very, very much for reading this, and All Glories to Srila Prabhupada!

My email address is: james_seymourii@excite.com

Your most fallen, eternal servant,