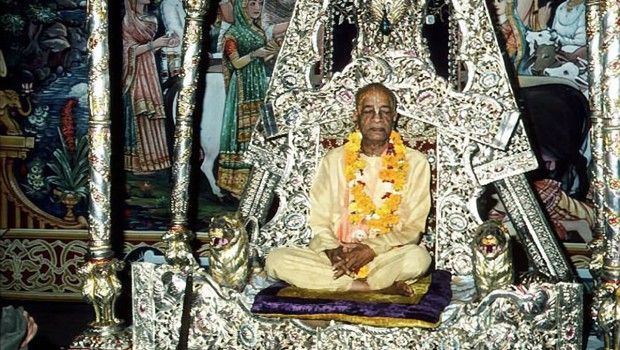 I have been discussing with Damaghosa, Gauridas Pandit, Yasodananda and others about starting some global sanga. It would be a loose confederation of independent groups or preaching centers and temples whose leaders all agree to sign a spiritual and philosophical manifesto regarding Srila Prabhupada and the siddhanta of guru-tattva.

Please accept my humble obeisances. All glories to Srila Prabhupada.

It was a pleasure to discover your website recently. I have been off line for a long time, and I rarely ever look at devotee sites because I am always afraid of reading some blasphemy or poison.

It is not that all attempts to cooperate outside of Iskcon have failed. Even as we speak there are many devotees working together successfully outside of ISKCON. They may only be small sangas without much contact with other sangas worldwide but the preaching is definitely going on. Your own website is a good example. I see the names of several devotees who have written nice articles and sent them in. So this is cooperation.

Regarding a well-organized global movement, that is not so easy. It must begin small and sincere. No big rah rah rah with fancy titles and positions will be enough to revive a global mission unless it is led by a group of pure brahmins or sincere devotees fully committed to Srila Prabhupada’s mission. Adau sraddha, sadhu sanga. I was hearing a tape yesterday, and Srila Prabhupada was saying that most religious leaders and sadhus have doubts about God. They are not fully convinced or fully informed and therefore they can’t fully convince or inform others. I think some one or few among us who at least know the philosophy must become fully fixed up and strong. It is like becoming guru. It requires some qaulification; then only is it successful. Srila Prabhupada empowers us to become gurus or preachers, and he tells us just how to do it when we are purified and surrendered. He has given us the format, and it used to be taken for granted in ISKCON that everyone must abandon personal motive and work as a menial servant of the Acarya. This is real glory, to become the dog of a Vaisnava — not to become a king among beasts who tries to devour the Acarya.

I have been discussing with Damaghosa, Gauridas Pandit, Yasodananda and others about starting some global sanga. It would be a loose confederation of independent groups or preaching centers and temples whose leaders all agree to sign a spiritual and philosophical manifesto regarding Srila Prabhuapda and the siddhanta of guru-tattva. The bottom line is that not everyone is ready to accept Lord Caitanya’s complete mercy in the form of Srila Prabhupada and His mission. Thus so many sahajiya groups will spring up in the West, as they have done in India for hundreds of years.

We should go on patiently hoping for good association and remain determined to stay within our small circle of friends, Who include the Sad-Gosvamis, the Pancatattva, Srinivasa Acarya, Narotamma das Thakura, and the Four Great Acaryas — Bhaktivinode Thakura, Srila Gaura Kisora das Babaji, Srila Bhaktisiddhanta and Srila Prabhupada. When we are really relishing this advanced association we will be able to help others get that association. Unless devotees are exclusively devoted to Srila Prabhupada’s mission, they can’t help anyone or themselves. At least about this fact we should have no doubt at all. We should never be fooled by those who claim some higher connection to Srila Rupa Gosvami and Srila Bhaktivinoda Thakura or those who claim no one can accept Srila Prabhupada directly without a “living guru”.

We are having our first meeting of the Global Vaisnava Sanga (Pacific Northwest) in the mountains of southern Oregon on a big lake in the forest in late July. We are inviting devotees worldwide and will be listing founding members and ritual offices. This won’t be a legal organization, at least not at first. We would like to make an announcement on Krishna.org tomorrow.

Thank you for creating and maintaining such a glorious, Prabhupada conscious website. Hope you are well.

4 Responses to A Global Sanga of Prabhupada Disciples