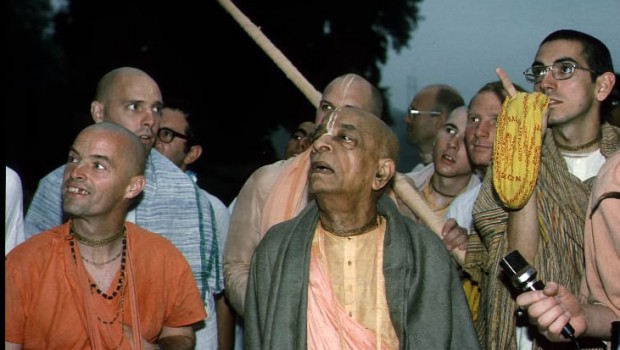 The Black-marketeers who have been recently raided in large scale by the police in Bihar, are almost in all cases rich merchants, millionaires, landlords etc. It would not have been possible for them to hoard such huge quantity of clothes and foodgrains if they would not have possessed extra wealth to do the mischief. These people were not needy men but they amassed money and hoarded commodities out of a passion

Such diseased persons who do not know the highest value of human life, but simply go on amassing money unnecessarily and immorally for the simple reason of sense gratification are described in the Bhagwat Geeta (Chap. 16, Sl. 6-20) as Ashuras or the demons or the opposite numbers of the Gods. The Ashura is generally faithless and unbeliever in the existence of the Supreme Personality of Godhead. He is led to think like that, otherwise he could not act so irresponsibly. His main principle of life is to satisfy the material senses coupled with undue pride and vanity of possessing more. It is unknown to him that his mind is the controlling agent of his material senses. Above his mind there is intelligence and above his intelligence there is his living spirit known as the soul. He amasses money for enjoying it in the estimation of sense gratification but not for the benefit of the soul. He does this business till the end of creation and makes arrangement by legalised documents how his future generations who may come to his home to enjoy the amassed wealth. His only business is to see how much bank balance he possessed yesterday and how it has increased today. He thinks of annihilating one enemy today and others tomorrow and tries to pose himself as one of the dominating Gods as if he has had attained to all perfection of life through the medium of money. But such Ashura is always bound up by the laws of Nature which he does not know. Simply for the sake of sense enjoyment which is permanently transient and bereaving, he amasses money by all sorts of means influenced by a disposition of passion anger and lust. It is stated in the Bhagwat Geeta that such class of Ashuras who are the lowest of the human being because they are not only mean but also envious to other fellow beings, are forced to take their birth in the lower grades of life after life still they are completely forgetful of the very existence of the Supreme Personality of Godhead. This forgetfulness of the relation with Godhead is the standard life of the animals and that is the highest punishment that can be inflicted by Nature on a living being.

So the Ashura, although apparently he seems to be fortunate enough by possession of much material wealth, is actually most unfortunate creature. Wealth is considered to be Laxhmi the Mother of opulence or the Internal Energy of Godhead. As such Mother Laxhmi is Eternal Consort of Narayana (Father of all Naras or the ‘living entity’) the Personality of Godhead. Therefore wherever there is Narayana surely there is His Eternal Consort Laxhmi. But where there is no realization of Narayana, the apparent existence of Laxhmi is the false representation of Her existence–just like Sita (Who is Laxhmi Herself) was falsely in the possession of Ravana. Ravana who is an ideal Ashura wanted to possess Sita by cheating Sri Rama. The result was that Ravana was vanquished with all his paraphernalia. It should be noted therefore that the ultimate destiny of the Ashura is just like that of Ravana.

The descendants of Ravana in the present age may take lessons from the fate of their celebrated forefather that they must not try to possess wealth or captivate Laxhmi simply by cheating Her Lord the Narayana or the Supreme Personality of Godhead. If they want to have money from Laxhmi and bestowed with Her favour, they must keep in contact with Narayana the LORD of Universe. We shall discuss in a separate article how such contact with Narayana can be made possible.

Laxhmi the Eternal Consort of Narayana is always engaged in the service of Her Lord. She can not be detached from such eternal service and if the Ashura like his forefather Ravana try to snatch Laxhmi from the service of Narayana surely the Ashura shall meet with the same fate as Ravana met with.

Forgetfulness of Narayana the Godhead and possession of wealth of Laxhmi goes ill together. The Ashura however imagines that Laxhmi having been in his possession the Lord of Laxhmi, Narayana has become poverty stricken! He does not know that neither Laxhmi can be dispossessed of Narayana nor the Latter can be made poverty stricken. The Ashura therefore in the course of his sense gratifying process exhibits a disposition of kindness by distributing a fraction of his ill-gotten wealth for the benefit of the so-called poverty-stricken Narayana (Daridra-Narayana)! Such conceptions are manufactured in the rabid brain of the Ashura.

Narayana is the singular Origin of all naras. Nara means living entity and ‘Ayana’ means the ‘repose’. In the Bhagwat Geeta we can get the information that all living entities irrespective of their source of birth or species, are all born of the Almighty Father Sree Krishna who is nondifferent from Narayana. He is the begetting Father and the material Nature is the material source of their birth. The Supreme Godhead being the Father of all living being, every one has got birth right share in the property of Godhead according to His plan. Such plan is not direct design of the Almighty Father but it is influenced by the living entities according to their mode of nature which they confront in the relative world. The Ashuras do not know this plan of God nor do they believe in it.

The Godhead as Father of all living entities, is equal to everyone. He does not design anyone’s activity subjectively or objectively neither does He create anyone’s factual results. The actions and their results are all outcome of the mode of Nature of a particular living entity, as it has imbibed by its association with different modes of nature. That is the instruction we get from Bhagwat Geeta.

The black-marketeers are, therefore, not influenced by any design of Godhead but they have become so by dint of their association with the modes of passion and ignorance. Unrestricted hankering after wealth is the result of the mode of passion for unsatiated enjoyment and madness after this sort of business, is the result of the mode of ignorance. They are due to lack of cultivating the mode of goodness which alone can endow them with a sense of proper vision and knowledge of life.

State can not check or banish out the black marketing process simply by police action, personal appeal or by legislative conventions. The mode of ignorance and passion have pervaded the whole atmosphere. The mode of goodness has altogether been banished from the religio-social life of the present generation. Attempt was made by leaders of men to revive the mode of goodness of the general populace but for want of proper handling the desired result was not obtained. It is not necessary or expected that everyone of the members of the general public will be able to develop this mode of goodness. But if there were only fifty heads all over the world who might have imbibed and practised in the mode of goodness the whole atmosphere of the world would have changed at once. One moon is sufficient to illuminate the whole firmament but millions of stars cannot even remove the darkness of night.

In order to save the world from a greater catastrophe which seems to be impending, some of the big heads of every state of the world must now combine to implement in their characters the mode of goodness. When they are so, general public will try to follow their footprints even if the members of public themselves cannot imbibe such nature.

It is necessary, therefore, that an association of really sincere gentlemen who may be turned to be devotees or so, should now be formed with a view to end the animal type of civilization. The civilization which has no other end in view than to solve the necessities of the body and mind only, is surely doomed to meet such calamities as are daily happening in the present age. The ignorant population whose basic principle of life is animality only cannot but eat one another’s flesh by such novel method as black-marketing or similar such sinister habits.

There is clear cut ways and means, as to how one can achieve, the quality of goodness, stated in the Bhagwat Geeta. One has to imbibe the characteristic goodness of habits in respect of bodily and mental activities, controlling the movements of speech, mind , belly, generating organ, anger and tongue. For any sincere gentleman, the whole course of achieving success in the above mentioned endeavours does not take a period more than a year only. Above all, controlling the habits of the tongue is the most important item. And who has control over the tongue is systematically able to control over all others senses. The socio-political leaders must be those who have passed the above course of controlling system. Sometimes leaders of superior capacity exhibit such controlling system without any systematic training. For want of systematic training one has to take about thirty to forty years to become a regular controller of the senses. One should therefore take up the standard process of attaining such success prescribed by the authority. According to the Bhagwat Geeta the ‘Mahatmas’ are all imbibed with all godly qualities and as such the Mahatmas are invariably devotees of the personality of Godhead. Such Mahatmas undoubtedly know it perfectly well that the Personality of Godhead Shree Krishna is the Primal Cause of everything. So to become a Mahatma is to learn the art of understading the personality of Godhead. To be continued.

One Response to A Spiritual Study of Greed [1944 BTG Article]