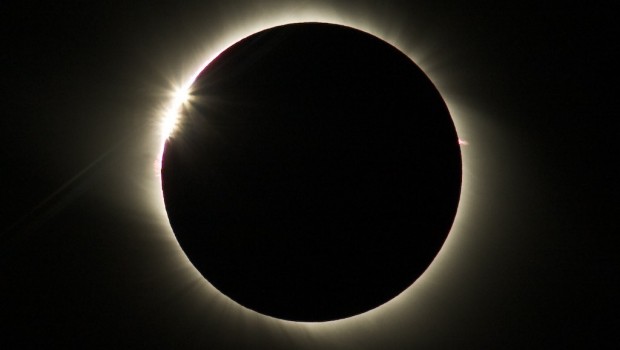 Solar Eclipses are not Caused by the Moon

According to Vedic Astronomy, the most ancient and accurate system of astronomy on the planet, solar eclipses are not caused by the Moon coming in front of the Sun as astronomers believe. Rather the Moon is described as being further away than the Sun and what happens at the time of a solar eclipse is the Moon goes behind the Sun and a dark planet call Rahu comes between the Sun and the Earth.

Of course, because we have been conditioned to believe as fact the structure of the universe as it has been taught to us since childhood we find it very difficult to accept such a thing. But it only requires a little thought to see that actually the ‘modern’ scientific idea is incompatible with our observations and the timeless Vedic knowledge is compatible with our observations.

Look at the moon on a full-moon night. It is shining so brightly that it lights up the whole surface of the Earth. On a full moon night you can very clearly see everything. Of course it is not as bright as the sunshine, but everything is very clearly visible. And if you were to view the earth from space on a full moon night it would not be dark. It would be illuminated by the moonshine and all the features of the earth would be clearly visible.

As there is ‘moonshine’ there must also be ‘earthshine’. Much of the earth is covered by water which is a good reflector of sunlight. In fact the scientists say ‘earthshine’ is much brighter than ‘moonshine’. And according to our understanding the earth is enormous in comparison to the size of the moon. So if the moonshine can completely illuminate this earth on a full moon night then the earthshine can completely illuminate the moon.

The ‘earthshine’ bombarding the moon at the time of a total solar eclipse would be at almost fifty times brighter than the moonshine on the earth on a full moon night. 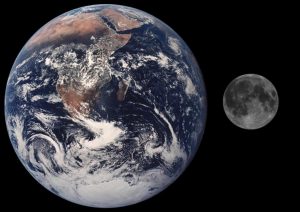 The Earth and Moon, to scale, in terms of both size and albedo/reflectivity. Note how much fainter the Moon appears, as it absorbs light much better than Earth does.

If Western astronomers are correct the solar eclipse would be the prefect time to see the moon illuminated by earthshine. The shadow created which causes the solar eclipse on earth is, according to NASA, at most 167 miles wide. So if you were sitting on the moon during a solar eclipse you would see an extremely bright earth planet with a dark circle of only 167 miles wide. This is not enough to diminish the earthshine in any significant way. So  even though the sun is behind the moon, the full force of the sunshine is hitting the earth and reflecting off those shiny blue oceans and reflecting off the land also. So the moon is completely illuminated by earthshine, even though the sun is directly behind it.

Now if Western astronomers were correct, if you were in that 167 mile wide path of the total eclipse of the sun when the sun was completely covered you would of course see the sky become black and then you could see the stars. But if the sun was covered by the moon you would be able to see the moon quite clearly, in front of the sun, illuminated by the ‘earthshine’. Of course it would not be as bright as the full moon, but the earthshine would certainly illuminate the surface of the moon so we could clearly see it and clearly make out the features on the moon’s surface.

But this does not happen… During a solar eclipse the sun goes completely black and even though the sunlight is blocked out and the sky goes black one can not detect the moon at all. It is just black. No moon. Of course we should be able to see the features on the moon as it is being bathed in brilliant earthshine… The sun should disappear and we should see the stars and in the place of the sun we should see the moon, illuminated by the earthshine. But we don’t see this.

So what does that mean? It means it is not the moon causing the solar eclipses. We know from the Vedas that what causes solar eclipses is a dark planet, currently unknown in the Western world, which hides in the shadow of the moon. Rahu is relatively close to us, around about the same distance as we think the moon is, but it is completely black, it does not reflect light at all. So even though there is plenty of earthshine falling on Rahu, because it is a black planet none of that light will be reflected back so we will see the sun simply blacked out in the sky on a full eclipse. Which is what we do see.

So this is absolute proof that the assumption of Western astronomers that solar eclipses are caused by the moon coming between the earth and the sun is wrong. Because if that was the case we would be able to see the moon during the full eclipse of the sun as it would be bathed in bright earthshine….

Earth Viewed from Moon During Eclipse 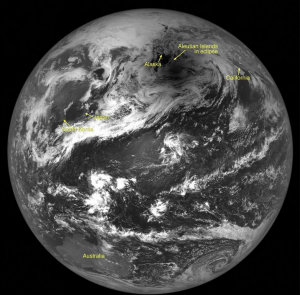 The Lunar Reconnaissance Orbiter turned toward Earth in May 2012 to capture a total solar eclipse over Alaska.

318 Responses to Solar Eclipses are not Caused by the Moon

Mysteries Of The Sacred Universe: The Cosmology of the Bhagavata Purana →