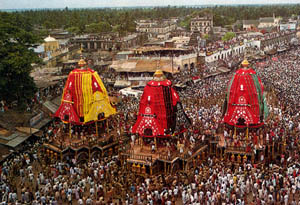 The huge parade was just about to begin moving when something amazing happened. A white dove immediately descended from nowhere and landed on the main float which had a deity of Srila Prabhupada, and suddenly perched itself at Srila Prabhupada’s lotus feet.

The world famous annual Calcutta Ratha-Yatra was held on July 3rd on a bigger and better scale than ever before. The preparations for this mammoth affair actually began in March since it takes a full three and a half months to prepare for the biggest ISKCON festival. In the run up to the preparations we were worried that the bad publicity about the Gurukula abuse law-suit would hurt us badly since in West Bengal it was in the papers every day for almost 2 weeks. However due to Lord Jaganntha’s mercy as well as the intensive media campaign we had undertaken to protect Srila Prabhupada’s reputation, the public turned out in huge numbers, to make this Ratha Yatra the biggest yet. Further evidence that we had managed to combat the negative publicity was the fact that we managed to collect 20% more in donations than the previous year to stage the festival. In the run up to the festival huge Billboards had been put up and a 70 page coloured souvenir had been sent out to over 15000 members.

On the parade itself the Raths were preceded by beautifully designed floats, sponsored by the leading industrial houses of Calcutta. Sattvik prabhu had meanwhile prepared the three huge 50 foot Raths with telescopic canopies. The Government minister of communication, Thapan Sikdar, was honoured to inaugurate the Rathayatra festival. He gave a very moving speech where he said that Srila Prabhupada is the most important spiritual leader that India has ever seen, and that what he has done no one else has been able to achieve! To get some idea of how huge the festival was, the main parade itself stretched for over 1.5 kilometers. The other dignitaries present were Aditya Kashyap, International Marwadi Federation president S.N. Bajaj, former chief justice of Gujarat G.N. Roy and Gordhanbhai Jerambhai.Trinamul Congress mayoral candidate Subrata Mukherjee performed the last arati at 7 pm.

The huge parade was just about to begin moving when something amazing happened. A white dove immediately descended from nowhere and landed on the main float which had a deity of Srila Prabhupada, and suddenly perched itself at Srila Prabhupada’s lotus feet. The dove was pure white with sparkling eyes, and the crowd immediately saw this as an auspicious sign and they immediately began to converge on the float. I was therefore forced to hold up the parade. This dove however was no ordinary dove. Unlike normal birds which will flee if approached by even one human, this dove stayed fearless as the whole mass of humanity thronged around it in their thousands.

Rather it appeared to simply glance at them mercifully, as the crowd stared at it. This went on for a full 12 minutes!! It was a never before seen spectacle. A pure white dove descended from nowhere, sitting at Srila Prabhuada’s lotus feet, bringing everything to a stand-still as it became surrounded by thousands of people. And it did not flinch at all. Finally the dove flew up onto another part of the float, and turned around and bowed its head as if paying obeisance’s to Srila Prabhupada and then flew away as the crowds in their hundreds who had gathered around the float gasped at this outstanding sight. Chaitanya das, a leading Bhakti Caru Maharaja disciple remarked that “this is incredible – Srila Prabhupada is pleased”, whilst the crowd immediately began to offer all sorts of reasons behind this good omen such as “some great devotee had come to get the blessings of Srila Prabhupada” or “this marks a new era for ISKCON” etc. etc.

After giving out 350,000 packets of prasadam, the carts finally reached the festival site where we had built a 5000 thousand square foot 70 foot high temple modelled along the lines of the Jaganatha Temple at Purim, to house Lord Jaganatha for the nine day festival during which we expect to host almost a million people who will come from all over Bengal and India. Spread over a 150,000 square foot area, the festival site boasts a yajnashala, a float exhibition, book stalls and also free prasad sponsored by Life Members.

Finally we will have the ulta (or return) Ratha Yatra at the end of the nine days which will be even bigger than the first day of Rathayatra. Thus the festival is still in full-swing, and we hope to have some more news and pictures, so please watch this space. The parade had specifically been boycotted by the Mayapur authorities, who normally sent many devotees to help. (Though Dayarama Das, the Director of Mayapur, was unable to stay away and was caught hiding from a high-rise building, taking a peep!) However this had no effect since over 80 devotees came from Banglore to assist and participated in a huge kirtan that enlivened the whole festival.

Srila Prabhupada instructed in 1977 to make the Rathayatra in Calcutta the biggest in the world and disliked it when devotees went to Puri and would say ” why are they going to Puri when my Rathyathra is in Calcutta”. By his mercy we have somehow managed to make this Rathayatra the largest in the world, and the devotees no longer go away to Puri, but participate in Srila Prabhupada’s Ratha Yatra. Srila Prabhupada may apparently not be physically here, but as far as we are concerned, he is still here pulling the Ratha, just as he did in the same city when he was 5 years old, when he inaugurated the first Calcutta Ratha Yatra.

To manage to hold any sort of festival at all right in the midst of the worst publicity in ISKCON’s history was in itself an achievement. But to do so with increased pomp, splendour and participation from all the public as well as all the local political leaders clearly demonstrates that no one and nothing can stop Srila Prabhupada’s mission as long as we adhere strongly to his divine instructions.