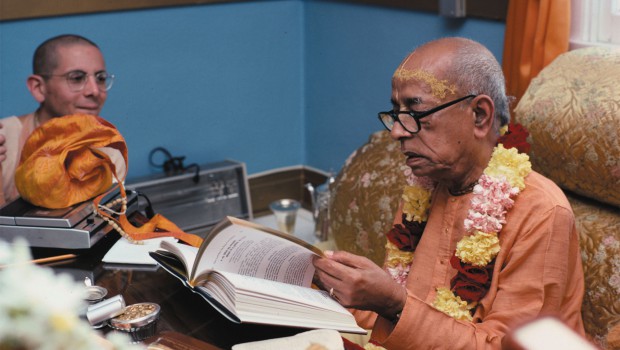 I would like to let you know that Srila Prabhupada’s original 1972 Bhagavad-gita As It Is Complete Edition has been reprinted in a beautiful full-sized edition with the original cover and 48 original color plates. The printing and paper are first-class.

Now we need your help. We are humbly requesting you to take the responsibility of distributing at least one case of ten of Srila Prabhupada’s original Bhagavad-gita’s to your friends, family and the people you meet over the next few weeks or months. Srila Prabhupada has told us so many times what a valuable service to Krishna it is to distribute his books:
“Any way we can distribute our books is good because anyone who reads our KRSNA book, TLC, NOD, and Bhagavad-gita As It Is, is sure to become a Krishna Conscious person. It is a most valuable service to Krishna to distribute these books.” (Srila Prabhupada in a letter to Damodar)We need your help to distribute these books.

In an attempt to make Srila Prabhupada’s original Bhagavad-gita As It Is easily available again to the devotees and the general public cases of ten Gitas are currently available at the printing cost only. It is such a beautiful book and will sell in book stores for thirty to forty dollars.

I am sure you will meet at least ten people who would be more than glad to give you a twenty dollar donation or more for one of these beautiful books over the next month or so.  So you will not be the looser in any way. You will get Krishna’s blessings and Srila Prabhupada’s blessings and the people you distribute the Bhagavad-gita’s to will make great spiritual advancement and will surely come to Krishna consciousness sooner or later. And you will even make some financial profit as well which you could use for future preaching projects.So we need your to help distribute these books and I am asking you to please order at least one case of Gitas.

You can order right now on-line through our secure and very simple fast credit-card processing service. It will take only a minute or two.

PLEASE CLICK HERE TO ORDER
“I am very glad that you understand the importance of these books. Let us try to distribute them far and wide, as many as possible, and that is solid spiritual information or real preaching work. We stand on our Krishna philosophy, and because it has the full potency of Krishna Himself, there is no limit to the effect it will have upon the world if we remain sincere and convinced for spreading this philosophy purely.” (Srila Prabhupada in a letter to Bahulasva)
Looking forward to receiving your order soon. All glories to your service. Chant Hare Krishna and be happy!Your servant