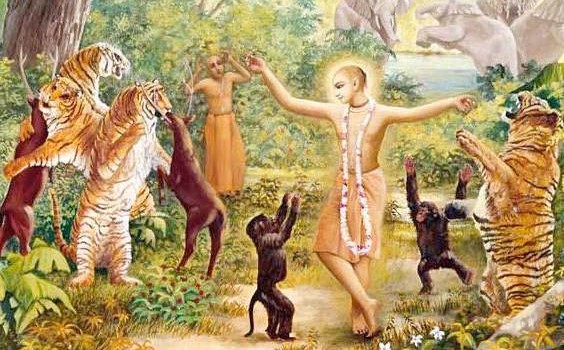 You have probably noticed “Chant Hare Krishna and be happy!” at the end of my letters. And some may be skeptical that simply chanting: Hare Krishna Hare Krishna, Krishna Krishna Hare Hare / Hare Rama Hare Rama, Rama Rama Hare Hare will produce happiness. However happiness is one of the very first symptoms that becomes manifest in a person advancing in Krishna consciousness. And this is my practical, personal experience. Ever since I started chanting the Hare Krishna mantra it has given me a sense of great transcendental happiness.

This process of ‘cleansing the mirror of the heart’ [ceto darpana marjanam] is described by Lord Sri Caitanya Mahaprabhu in one of the only eight verses that He wrote. These eight verses written by Lord Caitanya very perfectly summarize Krishna consciousness and one of the verses is:

Glory to the Sri Krishna sankirtana which cleanses the heart of all the dust accumulated for years and extinguishes the fire of conditional life of repeated birth and death. This sankirtana movement is the prime benediction for humanity at large because it spreads the rays of the benediction moon. It is the life of all transcendental knowledge. It increases the ocean of transcendental bliss and enables us to fully taste the nectar for which we are always anxious.

Lord Caitanya says if you chant the Hare Krishna maha-mantra all the dirty things which have accumulated in your heart due to material contamination will be cleared off. He gives the example that the heart is just like a mirror. If on the mirror there is heaps of dust accumulated one can not see his real face by the reflection of the mirror, therefore it should be cleansed. In our present conditional life our hearts are so overloaded with so much dust due to our material association from time immemorial, if we chant this Hare Krishna mantra then the dust will be removed. It will begin to be removed immediately and as soon as the heart is cleansed of all dust we can see our face, what we really are. Seeing our face means knowing our real identification.

By chanting Hare Krishna mantra we will understand we are not the body. This is our misconception. The dust means this misconception, accepting this body or the mind as self. Actually, we are not this body or the mind. We are spirit soul. So as soon as we can understand that we are not these bodies, immediately the blazing fire of material conditions, or the blazing fire of material miseries, becomes dissipated. No more misery. Aham brahmasmi.

As it is stated in the Bhagavad-gita, brahma-bhutah? prasannatma. Immediately one understands his real identification as spirit soul, he becomes joyful. In the material world we are not joyful. Due to our material contact, we are always full of anxieties. By chanting Hare Krishna mantra, we shall immediately come to the stage of joyful life. This is called liberation. When one becomes joyful, free from all anxieties, that stage is actual liberation because every living creature, the spirit soul, is by nature joyful. The whole struggle for existence is that he is searching after that joyful stage of life, but he missing the point. Therefore, every time we try for a joyful life we are being defeated. This constant defeat can be overcome immediately by chanting this Hare Krishna mantra. That is the effect of this transcendental vibration.

So we increase our pleasure because proportionately we increase the volume of our knowledge. It is just like the ocean, but still it increases. It is so nice that once situated in this state of life, one thinks that “I am fully satisfied.” Just like if one takes bath dipping into the water, he feels refreshed immediately. Similarly, in spiritual life the increasing joy day after day makes one feel that he is fully satisfied.

One who is thus transcendentally situated at once realizes the Supreme Brahman. He never laments nor desires to have anything; he is equally disposed to every living entity. In that state he attains pure devotional service unto Me. (Bhagavad Gita 18.54)

A materialist who is working very hard for sense gratification is miserable but for a devotee, who does not work for his own sense gratification but works for the gratification of Krishna’s senses, there is no misery. The devotee has nothing to lament or desire, because he has no desire except the desire to serve his spiritual master and Krishna. Because the devotee is serving God and God is full and completely satisfied in every way the devotee engaged in the service of Krishna also becomes full and completely satisfied in every way.  He becomes just like a river cleansed of all the dirty water.

Because the pure devotee has no thought other than Krishna he is naturally always joyful. He is not at all disturbed by material loss or gain because he is fully engaged in the service of the Lord. The pure devotee has no desire for any type of material enjoyment because he knows that every living entity is part and parcel of the Supreme Lord and therefore eternally a servant. The devotee’s peace and happiness comes from this realization that he is eternally a servant of Krishna and the only purpose of his life is to serve Krishna. He is attached to nothing except being engaged in the service of his spiritual master and Krishna. This is the real, natural and eternal constitutional position of every living entity: nitya krsna dasa, “every living entity is eternally a servant of Krishna.” As soon as we realize we are servants of Krishna and give up all personal desires and aspirations and simply work for the pleasure of Krishna under the direction of Krishna’s pure devotee, the bona fide spiritual master, we will at once be relieved of all the sources of anxiety and distress in the material world and at once we will relish transcendental happiness on the spiritual platform.

The world is miserable for the materially infected person, but for a devotee the entire world is as good as Vaikuntha, or the spiritual sky. The highest personality in this material universe is no more significant than an ant for a devotee. Such a stage can be achieved by the mercy of Lord Caitanya, who preached pure devotional service in this age.

The stage of perfection is called trance, or samadhi, when one’s mind is completely restrained from material mental activities by practice of yoga. This is characterized by one’s ability to see the self by the pure mind and to relish and rejoice in the self. In that joyous state, one is situated in boundless transcendental happiness and enjoys himself through transcendental senses. Established thus, one never departs from the truth and upon gaining this he thinks there is no greater gain. Being situated in such a position, one is never shaken, even in the midst of greatest difficulty. This indeed is actual freedom from all miseries arising from material contact. (Bhagavad Gita 6.20-23)

This is from the Sixth Chapter of Bhagavad Gita which we have been discussing for some weeks now. By practice of yoga one becomes gradually detached from material concepts. This is the primary characteristic of the yoga principle. And after this, one becomes situated in trance, or samadhi, which means that the yogi realizes the Supersoul through transcendental mind and intelligence, without any of the misgivings of identifying the self with the Superself. In this verse transcendental pleasure–realized through transcendental senses–is accepted.

When the yogi is once situated in the transcendental position, he is never shaken from it. Unless the yogi is able to reach this position, he is unsuccessful. Today’s so-called yoga practice, which involves various sense pleasures, is contradictory. A yogi indulging in sex and intoxication is a mockery. Even those yogis who are attracted by the siddhis (perfections) in the process of yoga are not perfectly situated. If the yogis are attracted by the by-products of yoga, then they cannot attain the stage of perfection, as is stated in this verse. Persons, therefore, indulging in the make-show practice of gymnastic feats or siddhis should know that the aim of yoga is lost in that way.

The best practice of yoga in this age is Krishna consciousness, which is not baffling. A Krishna conscious person is so happy in his occupation that he does not aspire after any other happiness. There are many impediments, especially in this age of hypocrisy, to practicing hatha-yoga, dhyana-yoga and jnana-yoga, but there is no such problem in executing karma-yoga or bhakti-yoga.

As long as the material body exists, one has to meet the demands of the body, namely eating, sleeping, defending and mating. But a person who is in pure bhakti-yoga or in Krishna consciousness does not arouse the senses while meeting the demands of the body. Rather, he accepts the bare necessities of life, making the best use of a bad bargain, and enjoys transcendental happiness in Krishna consciousness. He is callous toward incidental occurrences–such as accidents, disease, scarcity and even the death of a most dear relative–but he is always alert to execute his duties in Krishna consciousness or bhakti-yoga. Accidents never deviate him from his duty. As stated in the Bhagavad-gita, agamapayino ‘nityas tams titiksasva bharata. He endures all such incidental occurrences because he knows that they come and go and do not affect his duties. In this way he achieves the highest perfection in yoga practice.

120 Responses to Chant Hare Krishna and be happy!