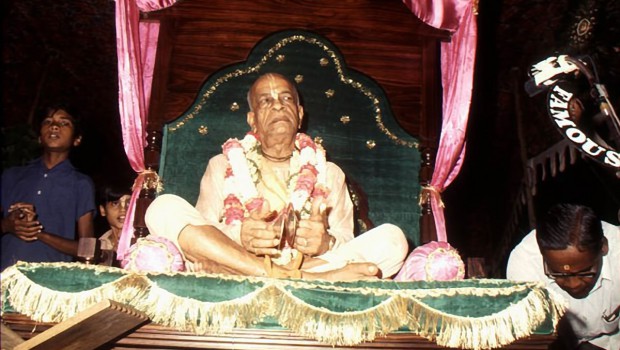 The lack of character and moral responsibility in our top leaders created an atmosphere in which child abuse flourished and was allowed to continue unabated. Child abuse is the tip of an iceberg of improper behavior that has led to massive lack of confidence in ISKCON and its leaders, and mass desertions.

The status of the GBC in the eyes of the general devotees is rock bottom and could hardly go lower. A far cry from the Prabhupada days, when GBC men were practically worshipped. Those who are responsible for this demise should kindly accept moral responsibility, or be forced to do so. Unless punishment for abuse is extended beyond that of child abusers, injustice will be done in the name of justice and reform will not go to the roots.

At present, deviations by GBC members are simply not taken seriously enough.

I was told by a GBC member that another GBC man recently slept in a van with a brahmacarini, and regularly bought flowers for her. But no action is taken. There is no accountability for the GBC, and thus they can do whatever they like and get away with it. In extreme cases, they may get a temporary suspension from initiating, which they don’t follow anyway. This is abuse.

The lack of character and moral responsibility in our top leaders created an atmosphere in which child abuse flourished and was allowed to continue unabated until some ex-abusees got vocal about it.

Child abuse is the tip of an iceberg of improper behavior that has led to massive lack of confidence in Iskcon and its leaders, and mass desertions.

If Iskcon leaders are serious to truly restore the good name and missionary dynamism of the society, the first step is that they must have enough courage and character to own up to their mistakes and be prepared to take the consequences for them.

I am not in favor of punishing devotees, but if at all there is to be punishment, then it is unfair that — and a few others are punished for past sins, while the leaders who presided over the whole catastrophe and whose policies have caused untold distress to thousands of devotees, not only go scot-free, but continue to enjoy the honor and position of great saints.

Does not big position bring with it big responsibility? Should not the — GBCs accept responsibility concomitant to the unparalleled honor, facilities and personal finances that have been bestowed on them for so many years?

Even in karmi corporations and governments, it is not uncommon for top leaders to resign when subordinates make major blunders, especially blunders that are injurious to people’s lives and well-being. Even if the leaders were unaware of their subordinates’ malpractices, they take moral responsibility for it.

The logical extension of this should be a sincere desire to make amends, to reform and to start a new era of zero tolerance for all forms of abuse, especially that perpetrated by leaders, whose moral responsibility is greatest and who are therefore more guilty for any crimes they have committed.

Several top leaders in Iskcon have abused their positions and scorned the faith placed in them, by deviating from the high standard desired by Srila Prabhupada. It is therefore in order to also take retroactive action against Iskcon leaders who propagated erroneous and highly damaging speculations such as zonal acarya-ism, premature gopi-bhava etc. Those who deviated from their initiation vows by failing to regularly chant 16 rounds, or who engaged in grossly sinful activities after initiation, should also have punitive action taken against them. Child abusers are banned from giving class, leading kirtan, initiating, or holding any leadership position, and the same measures should be taken against those who have abused their leadership roles.

We are informed that child abusees often feel placated if they see real measures being taken against abusers, and if abusers express genuine remorse. Conversely, they feel disgusted and reject Iskcon if they see gross offenders carrying on as if nothing had happened. The same applies in the case of abusers and abusees of all types.

If we accept the concept of psychological abuse, then there is hardly a devotee outside the top ranks of this movement who was not abused — especially in the zonal acarya era. Thousands of devotees who came to ISKCON with hope, later left or were driven away in bitterness. Excesses by leaders even led to cases of murder and suicide.

The grossest manifestations of abuse mostly fell on the weaker sections of the society, namely the women and children. The leaders of ISKCON are surely responsible for the ethos of abuse they created and presided over. Child abusers in ISKCON may be victims of misguidance by leaders more than they are criminals.

If we were really remorseful about abuse, we would not punish only child abusers, but abused of all categories. We show no interest in coming to terms with, for instance, the shattering abuse that has been perpetrated in the name of guruship. In light of the profound, all-pervasive abuse that took place throughout our society, to target only child abusers is biased and hypocritical. Thus, while campaigning against abuse, we perpetrate more abuse, all in the name of justice.

Reports of child abuse investigations take much care to persuade us of the fairness of the proceedings. Yet there is inherent unfairness in pinpointing only child abusers. If there is to be justice and retribution, let it be at all levels.

Why are only child abusers being punished? It is illogical to think that we can contain the legal effects of abuse by punishing a few individuals. The child abuse storm may seem like a big problem, but it is only a warning of worse things to come. Today the ex-gurukulis are threatening legal action, but tomorrow there may be thousands of devotees suing for psychological abuse. We will be as incompetent to rebut their accusations as we are with the ex-gurukulis, because their claims are true. Our movement has a horrible history of abuse.

Srila Prabhupada made a house for the whole world to live in, but we have made it uncomfortable for anyone to live in, including ourselves. We are all collectively responsible, and the leaders more so.

We needed a mass catharsis years ago, and it may not still be too late if we dare to look into our hearts and be honest before Krsna about our massive failure. But will it happen? Unlikely. The GBC are the perpetrators. How then, are they going to put themselves on trial? They have already been judged and tried by thousands of devotees, who have voted with their feet by walking out.

But the GBC goes on with its mutual lauding and platitudes, assuring each other that everything is basically all right, and that we’re really doing a good job of cleaning up the house. Dear GBC men: is it possible that you open your eyes? The house is in worse shape than anyone could have imagined.

There are many angry people both inside and outside it, and they can no longer be easily fooled or appeased.

Unless and until there is a real change of heart, and a genuine attempt to overcome the terrible mistakes of the past, those angry people are not going to let us go. We will be smashed again and again until the name of Srila Prabhupada’s Iskcon will be universally shamed and scorned.

In the absence of sincere apologies from anyone for the horrendous and massive abuse of the past, let’s get on the case of all abusers, not only child abusers. (BTW the same thing is going on today–devotees known to be spiritually sick are allowed to go on initiating. Is this not abuse of the prospective disciples?)

However, I maintain that if we are really serious about cleaning out abuse, we should do so at all levels. It is imbalanced, at best, to come down heavy on child abusers while neglecting the widescale abuse that pervaded our whole society.

If I am cynical, I am not alone in my cynicism. Everywhere, devotees are expressing discontent with the way things have been going on for the last so many years. Many senior leaders, including temple presidents, sannyasis, and even GBC men, have expressed to me their discontent with the state of the movement and with the policies and attitudes of the GBC. I am not one to go looking for tales of discontent, but nevertheless hear enough of them to understand that there is something basically out of sync in our movement.

Many devotees have resigned themselves to living and working in an organization in which they feel uncomfortable, but feel helpless to change.

My personal experiences in trying to communicate matters to the GBC have been most discouraging.

In response to my recent postings, a senior and respected devotee wrote to me:

> I very much enjoyed and appreciated reading this from you, Maharaja. I
> share your anger. My specific service is ****, but I completely agree that
> there is deep corruption and hypocrisy in ISKCON leadership, and
> practically the ISKCON so-called leaders are the only ones who don’t see
> it, and thus devotees more and more do not try to take shelter in the GBC,
> as the GBC body does not command respect, and in fact has become a
> laughingstock, at best, and perhaps an abject tragedy. Hare Krsna.

2 Responses to Corruption At The Highest Levels Of ISKCON