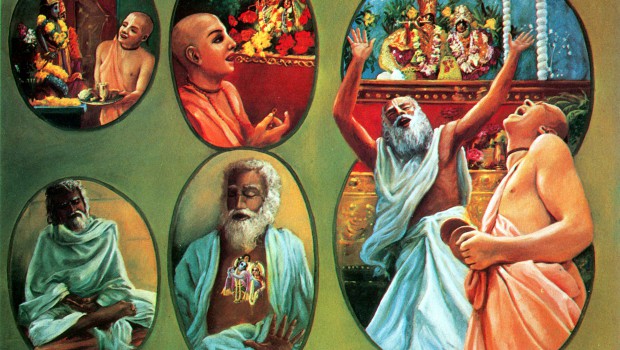 Many people have heard of “Dharma,” even the term “Sanatana Dharma” has become quite well known. But exactly what is Dharma? And what is Sanatana Dharma? I will attempt to explain in this post. I have extracted and summarized this from the introduction to Bhagavad-gita As It Is by His Divine Grace A.C. Bhaktivedanta Swami Prabhuapda.

The Sanskrit word sanatana means “eternal” and the word dharma means “occupation.” Therefore the term “Sanatana Dharma” can be taken to mean our eternal occupation.

Krishna is very kind to the living entities because they are His sons. Krishna declares in the Bhagavad Gita that, “I am the father of all.” There are many different types of living entities according to their different karma, and Krishna declares He is the father of them all. Therefore, time and time again, the Lord descends to this material world to reclaim all of these fallen, conditioned souls to call them back to the sanatana, eternal,  sky so that the sanatana living entities may regain their original eternal positions in association with the Lord. Thus Krishna comes himself in different incarnations, or He sends His confidential servants as sons or acaryas to reclaim the conditioned souls.

That which has neither beginning or end cannot be sectarian, for it cannot be limited by any boundaries. Yet those belonging to some sectarian faith will wrongly consider that sanatana-dharma is also sectarian, but if we go deeply into the matter and consider it in the light of modern science, it is possible for us to see that sanatana-dharma is the business of all people of the world–nay, of all the living entities of the universe.

Non-sanatana religious faith may have some beginning in the annals of human history, but there is no beginning to the history of sanatana-dharma because it remains eternally with the living entities.

The Bhagavad-gita states that the living entity has neither birth nor death, he is eternal and indestructable, and he continues to live after the destruction of his temporary material body.

In reference to the concept of sanatana-dharma, we must try to understand the concept of religion from the Sanskrit root meaning of the word. Dharma referrs to that which is constantly existing with the particular object.  We conclude that there is heat and light along with the fire; without heat and light there is no meaning to the word fire. Similarly, we must discover the essential part of the living being, that part which is his constant companion. That constant companian is his eternal quality, and that eternal quality is his eternal religion.

When Sanatana Gosvami asked Sri Caitanya Mahaprabhu about the constitutional position of the living being He replied that it is the rendering of service to the Supreme Personality of Godhead. If we look at what is happening around us in the world we can easily see every living being is constantly engaged in rendering service to another living being. We can see that one friend serves another friend, the mother serves the son, the wife serves the husband, the husband serves the wife and so on. If we go on searching in this spirit, it will be seen that there is no exception in the society of living beings to the activity of service. The politician presents his manifesto for the public to convince them of his capacity for service. The voters therefore give the politician their valuable votes, thinking that he will render valuable service to society. The shopkeeper serves the customer, and the artisan serves the capitalist. The capitalist serves the family, and the family serves the state. In this way we can see that no living being is exempt from rendering service to other living beings, and therefore we can safely conclude that service is the constant companion of the living being and that the rendering of service is the eternal religion of the living being.
Yet man professes to belong to a particular type of faith with reference to particular time and circumstance and thus claims to be a Hindu, Muslim, Christian, Buddhist or any other sect. Such designations are non-sanatana-dharma. A Hindu may change his faith to become a Muslim, or a Muslim may change his faith to become a Hindu, or a Christian may change his faith and so on. But in all circumstances the change of religious faith does not effect the eternal occupation of rendering service to others. The Hindu, Muslim or Christian in all circumstances is servant of someone. Thus, to profess a particular type of sect is not to profess one’s sanatana-dharma. The rendering of service is sanatana-dharma.
Factually we are related to the Supreme Lord in service. The Supreme Lord is the supreme enjoyer, and we living entities are His servitors. We are created for His enjoyment, and if we participate in that eternal enjoyment with the Supreme Personality of Godhead, we become happy. We cannot become happy otherwise. It is not possible to be happy independently, just as no one part of the body can be happy without cooperating with the stomach. It is not possible for the living entity to be happy without rendering transcendental loving service unto the Supreme Lord.
Therefore, to summarize, the sanatana-dharma of every living entity is the rendering of service. No matter what religion one professes to belong to, this eternal occupation of rendering service remains with the living entity. To perfect one’s life one simply requires the redirection of this service. Instead of serving in the material world, he can serve Krishna, the Supreme Persoanlity of Godhead. This process, transforming one’s service from persons and objects in the material world, to the service of Krishna in the spiritual world, is the art of Krishna consciosuness and as we progress in this newsletter we will discover how we can easily transform seemingly material activities into liberating transcendental activities, by performing them for the pleasure of Krishna.