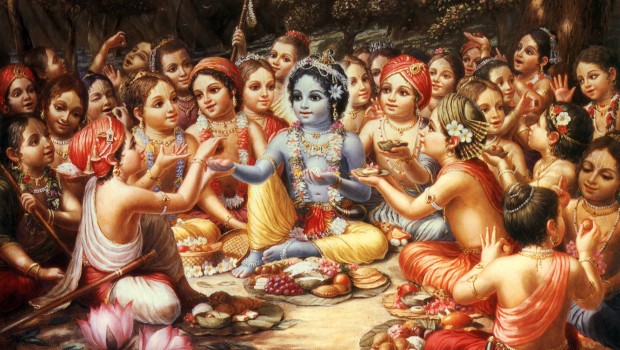 We are continuing with our study of Srila Prabhupada’s Bhagavad-gita As It Is Chapter 7.  In the second verse Krishna declares to Arjuna:

I shall now declare unto you in full this knowledge both phenomenal and noumenal, by knowing which there shall remain nothing further to be known. (Bhagavad-gita 7.2)

Krishna wants to explain full knowledge because Arjuna is Krishna’s confidential devotee and friend. In the beginning of the Fourth Chapter this explanation was given by the Lord, and it is again confirmed here: complete knowledge can be achieved only by the devotee of the Lord directly from the Lord in disciplic succession.

Krishna goes on to explain to Arjuna how incredibly rare it is for a person to understand Him in truth. Even out of these souls who are already liberated, already perfected, hardly one of them knows Krishna in truth:

Out of many thousands among men, one may endeavor for perfection, and of those who have achieved perfection, hardly one knows Me in truth. (Bhagavad-gita 7.3)

Generally mankind is simply engaged in the animal propensities, namely eating, sleeping, defending and mating, and hardly anyone is interested in transcendental knowledge.

The first six chapters of the Gita are meant for those who are interested in transcendental knowledge, in understanding the self, the Superself and the process of realization by jnana-yoga, dhyana-yoga, and discrimination of the self from matter. However, Krishna can only be known by persons who are in Krishna consciousness. Other transcendentalists may achieve impersonal Brahman realization, for this is easier than understanding Krishna. Krishna is the Supreme Person, but at the same time He is beyond the knowledge of Brahman and Paramatma.

The yogis and jnanis are confused in their attempts to understand Krishna, although the greatest of the impersonalists, Sripada Sankaracarya, has admitted in his Gita commentary that Krishna is the Supreme Personality of Godhead. But his followers do not accept Krishna as such, for it is very difficult to know Krishna, even though one has transcendental realization of impersonal Brahman.

Krishna is the Supreme Personality of Godhead, the cause of all causes, the primeval Lord Govinda. It is very difficult for the nondevotees to know Him. Although nondevotees declare that the path of bhakti or devotional service is very easy, they cannot practice it. If the path of bhakti is so easy, as the nondevotee class of men proclaim, then why do they take up the difficult path? Actually the path of bhakti is not easy. The so-called path of bhakti practiced by unauthorized persons without knowledge of bhakti may be easy, but when it is practiced factually according to the rules and regulations, the speculative scholars and philosophers fall away from the path. Srila Rupa Gosvami writes in his Bhakti-rasamrta-sindhu:

“Devotional service of the Lord that ignores the authorized Vedic literatures like the Upanisads, Puranas, Narada-pancaratra, etc., is simply an unnecessary disturbance in society.”

It is not possible for the Brahman realized impersonalist or the Paramatma realized yogi to understand Krishna the Supreme Personality of Godhead as the son of mother Yasoda or the charioteer of Arjuna. Even the great demigods are sometimes confused about Krishna: “No one knows Me as I am,” the Lord says. And if one does know Him, then, “Such a great soul is very rare.” Therefore unless one practices devotional service to the Lord, he cannot know Krishna as He is, even though one is a great scholar or philosopher.

Only the pure devotees can know something of the inconceivable transcendental qualities in Krishna, in the cause of all causes, in His omnipotence and opulence, and in His wealth, fame, strength, beauty, knowledge and renunciation, because Krishna is benevolently inclined to His devotees. He is the last word in Brahman realization, and the devotees alone can realize Him as He is. Therefore it is said:

“No one can understand Krishna as He is by the blunt material senses. But He reveals Himself to the devotees, being pleased with them for their transcendental loving service unto Him.” (Padma Purana)

38 Responses to Finding someone who understands Krishna is VERY rare