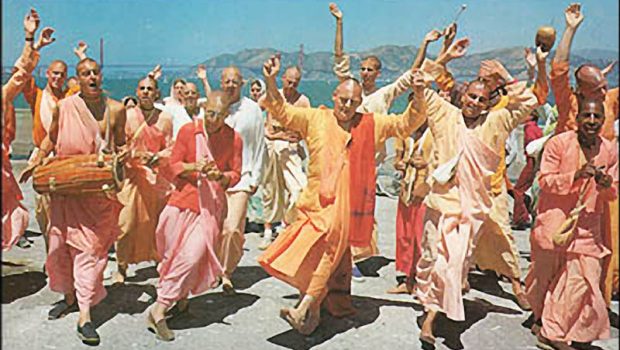 The singing and dancing of Hare Krishna is known as kirtana. My spiritual master Srila Prabhupada said, This is not ordinary dancing; this is the dancing of the soul, a soul awakened to his original consciousness, Krishna consciousness.

Krishna consciousness is transcendental happiness. Material happiness is temporary. One thinks he will be happy with a beautiful wife, girlfriend, boyfriend, bank balance, relatives, house and car. But such happiness is flickering because these things are material, and thus short-lived. We are naturally happy as spirit souls. The soul is ananda. Ananda means bliss. As sugar is sweet, and fire is hot, the soul is blissful ananda. We do not have to look for happiness outside of ourselves; happiness lies within. That spiritual bliss of the soul is now covered by this material body, made of earth, water, fire, air and ether.

Chanting Hare Krishna helps one to understand the difference between the body and the soul. As soon as we chant Hare Krishna, we begin to realize that “I’m not American or German, Filipino or Japanese, black man or white man, fat man or thin man. I am the living force within this body.” Upon realizing this, one becomes happy–liberated from temporary and frustrating bodily designations.

Chanting Hare Krishna is not new; it is very old. It is recommended and authorized by all Vedic literatures, the world’s oldest and most profound books of knowledge. Now, the chanting is being spread all over the world. In Japan, Hawaii, America, England, Germany, France, Africa, India, Australia–everywhere the chanting of Hare Kishna is going on.

Krishna consciousness is a philosophy and a way of life. Everyone can accept Krishna consciousness because every one of us is a servant of Krishna. Now, we are thinking that we are Americans, Germans, Africans or Indians. But this identity pertains only to the body. The soul within the body is not German or American, black or white. The soul is transcendental.

If we want to be happy and perfect in life, then we have to become Krishna conscious, fully aware of God and our relationship with Him. Krishna consciousness is very easy to attain. One can become Krishna conscious in a second. It depends on us. We simply have to surrender to Krishna. The process of surrendering begins with the chanting of the holy names of the Lord: Hare Krishna, Hare Krishna, Krishna Krishna, Hare Hare/ Hare Rama, Hare Rama, Rama Rama, Hare Hare. The goal of human life is to become happy. Everyone wants to be happy. People are spending millions of dollars to get a little happiness.

Chanting doesn’t cost anything. No one is asking for money: “Give me five dollars.” It is free and it’s not illegal. One can chant anywhere: at home or in the temple, in the office or in the bath. One can chant wherever he likes Hare Krishna, Hare Krishna, Krishna Krishna, Hare Hare/ Hare Rama, Hare Rama, Rama Rama, Hare Hare–and become Krishna conscious, become happy, and go back home, back to Godhead. The purpose of this mission is to spread the chanting of Hare Krishna, because this chanting will make people happy.

In 1885, Srila Thakura Bhaktivinoda wrote: “Oh, for that day when the fortunate English, French, Russian, German and American people will take up banners, mrdangas and karatalas and raise kirtana through their streets and towns … and join with the Bengali devotees. When will that day be?” In 1974, Srila Bhaktivinoda’s desire was fulfilled by the disciples of His Divine Grace A. C. Bhaktivedanta Swami Prabhupada.