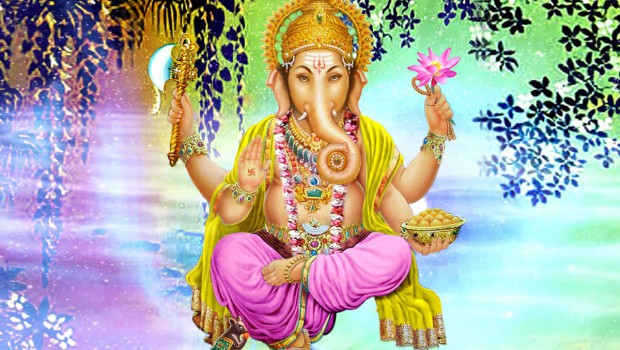 On the other hand, praying to Ganeshji for MATERIAL advancement deepens your materialistic bonds and does not free you for attaining the highest perfection of human life, namely service to the Supreme Lord Krishna and Srimati Radharani…

This is a fantastic visual representation of the true nature and form of Lord Ganesh. In the ‘Brahma Samhita’ it is stated that Lord Ganesh derives his powers to destroy all impediments by worshipping the lotus feet of Lord Narasimhadeva (the form of Krishna who killed the demon Hiranyakashipu).

It is recommended in the ‘Bhakti rasamrita sindhu’ written by Srila Rupa Goswami (one of the great Vaishnava acharyas) that all devotees should worship Lord Ganesh in order to have their path towards devotional service to Sri Sri Radha and Krishna cleared of all impediments. On the other hand, praying to Ganeshji for MATERIAL advancement deepens your materialistic bonds and does not free you for attaining the highest perfection of human life, namely service to the Supreme Lord Krishna and Srimati Radharani…..

71-08-25 Letter: Sivananda
So far worshipping Ganesa is concerned, that is not necessary. Not that it should be done on a regular basis. If you like you can pray to Ganapati for removing all impediments on the path of Krishna Consciousness. That you can do if you like.

74-12-28 Letter: Sons
Krsna says in the Bhagavad-gita, chapter 18; sarva-dharman parityajya, mam ekam saranam vraja, aham tvam sarva-papebhyo, moksayisyami ma sucah. So why you want to worship someone else. Krsna, Himself, recommends mam ekam, he alone. Therefore we must do like that. If one wants to water the tree he waters the root. There is no necessity of watering the branches. The demigods are all different parts of the universal form of the Supreme Lord. But Krsna is even more than that whole complete universal form. He is the origin of that universal form. Therefore I do not encourage you to worship this demigod, Ganesa. It is not required, it is not necessary. Simply worship Krsna. Perform nice devotional service to Krsna. Then your lives will certainly become perfect. Of course if one has got some sentiment for achieving the blessings of Ganesa for accumulating large sums of money to serve Krsna, then he may perform this Ganesa worship, privately, not making a public show. But first of all he must give me $100,000 per month. Not a single farthing less. If he can supply this amount, $100,000 per month, then he will be allowed to do this Ganesa Puja. Otherwise he should not do it. It will not be good. That is my order. So all of you keep yourselves strong in Krsna Consciousness by following all of my basic principles. That is of the utmost importance. Do not fail to chant 16 rounds daily, rise early, come to mangala arati, come to classes and follow the 4 regulative principles. In this way your life will become free from all anxieties. Please try to distribute my books in huge quantities more and more. This is very much satisfying to me.

74-12-31 Letter: Gurukrpa
Regarding Ganesa Puja, I have received some letters from persons requesting to also perform it. I have explained to them that ultimately it is not required, but if you have some sentiment to get the blessings of Ganesa in order to get huge sums of money for service of Krishna, then it can be done, but privately. I have instructed them that if they want to do it, they must send me at least 100,000 dollars monthly–not less.

Guest: You say a true devotee of Krsna, such a person need not go after the demigods?

Prabhupada: There is no need.

Guest: But if he goes after demigods…

Guest: Not? Then, sir, there is Rama and there is Krsna. You have Hare Rama Hare Krsna. So Rama is Hari. Krsna is considered Hari. So when you…

Guest: That’s good. So that explains…

Guest: In that expansion can’t we take Durga and Siva, even for…

Prabhupada: Yes. That is sakti-tattva. We have to take expansion according to the tattva. Substance and categories; in which category. The substance is Visnu, and all other tattvas are categories. So devatas, they are sakti-tattva, sakti category, the same category as you are. The same example. Just like here a government officer, he is also Indian gentleman, you are also Indian gentleman, but he has got his power on account of his high qualities. Similarly you can become also Durga. You can become Indra, Candra, Surya. So qualitatively the ant, you are a learned brahmana, they are all the same category.

Guest: For meditation, which form should we…

Guest: But in the Eleventh Chapter of the Gita…

Guest: …then Lord has shown His virat-darsana.

Guest: He has shown Brahma, Visnu, Mahesa, etc. They are all in Him.

Guest: Subordinate to Him.

Prabhupada: You are also in Him.

Guest: They are subordinate to Him.

Guest: Therefore to meditate on Krsna, the only Hare Krsna.

Prabhupada: Yes. To meditate upon Krsna is the highest yogic principle.

Guest: So that’s what I asked…

Prabhupada: But higher yogis, bhakta-yogis, they see only Krsna.

Guest: What is fit for lay people? Which form should we meditate upon?

Guest: I asked which form, that is the form…

Guest: But when you chant “Rama,” the other…

Prabhupada: Yes. Rama is another… There is no difference between Rama and Krsna. If you like…

Guest: The form comes different in the…

Prabhupada: Yes, but they are the same. Ramadi murti.

Guest: For purpose of practice I am asking, when you chant Rama, should you have the form of Rama before you?