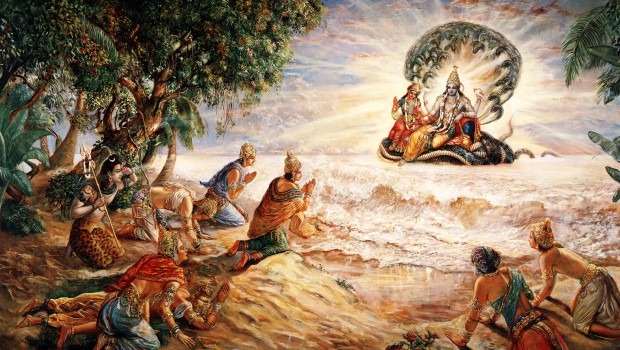 When Brahma’s day is manifest, this multitude of living entities comes into being, and at the arrival of Brahma’s night they are all annihilated. (Bhagavad-gita 8.18)

The less intelligent living entities try to remain within this material world and are accordingly elevated and degraded in the various planetary systems.

The individual souls remain compact in the body of Visnu and again and again are manifest at the arrival of Brahma’s day.

When Brahma’s life is finally finished, they are all annihilated and remain unmanifest for millions and millions of years. Finally, when Brahma is born again in another millennium, they are again manifest.

In this way the living entities are captivated by the material world. However, those intelligent beings who take to Krsna consciousness and chant Hare Krsna, Hare Rama in devotional service transfer themselves, even in this life, to the spiritual planet of Krsna and become eternally blissful there, not being subject to such rebirths.

25 Responses to Getting Everything Into Perspective