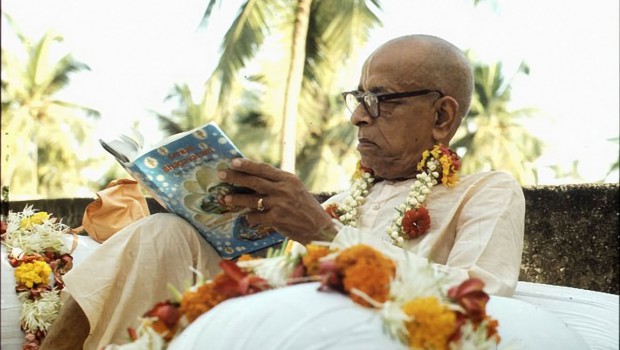 Published on May 2nd, 2003 | by don-lattin--san-francisco-chronicle | Full size image

Growing Up in the Hare Krishnas

Though they have mixed views about their upbringing in the sect, one ISKCON couple keeps their faith.

Subal Smith was only 6 months old when his parents left New York and joined the great hippie migration, heading “straight to the Haight.” It was the early 1970s, and the peaceful glow had already faded from San Francisco’s counterculture scene, replaced by hard drugs and harder hearts.

Smith’s parents headed south to Santa Cruz, in search of mellower climes. There, they stumbled upon a band of ecstatic, chanting converts–blissfully on the road to cosmic consciousness.

Meanwhile, out in Texas, Tulsi Briones looked out the window of her mother’s Austin home. Five Hare Krishna buses were parked outside.

It was 1979, Briones was 6 years old, but she remembers it like it was yesterday.

“My mother came to me and said, ‘We’re joining the Hare Krishnas.’ She put me in the car and I said, ‘What about our house? What about our stuff?’

Briones and Smith both wound up in Hare Krishna schools–one in Dallas and the other in the Sierra foothills–and both drifted away from the Hindu sect once they were out on their own.

Six years ago, they crossed paths at a festival at the Krishna temple in Los Angeles, a kind of reunion for kids who grew up in the movement.

“My friends convinced me to go to the festival in L.A. I went with an open heart, to be with Krishna,” said Briones, who had recently moved from Texas to Southern California.

Briones hadn’t been to a Hare Krishna temple since she was 11 years old. But she never really stopped being a believer.

After Briones had attended the Krishna school to age 11, her mother sent her to a Montessori school, then a Catholic school, then a public high school in Texas.

“It leaked out that I was a vegetarian and a Hare Krishna, so I was the weirdo,” said Briones. “Remember, this is Texas. I’m the only vegetarian in the whole school and the only one who believed in the little blue Smurf God.”

Shortly after the L.A. festival, Briones and Smith moved in together.

“His parents loved me because I was a Krishna girl,” she said. “I loved him because he was a real guy, not some devotee man who was, like, you’re a wife and that’s your only position.” They were married in a traditional ceremony in the Hare Krishna temple in Berkeley, with Indian garb and a fire ritual.

In 1999, their daughter was born, Radha Luna Smith.

Smith has good memories of growing up with the Krishnas.

In the mid-1970s, his parents wound up at the Hare Krishna temple in Los Angeles, where his mother taught at the ashram school. Later, he was sent to a Krishna boarding school in the Sierra foothills.

“For me, it was incredible to be living on the land, and being a farmhand. I was 10 or 11 and had a great experience. My trip there happened to be very sweet. The person who took care of us was a super nice soul.”

At age 13, Smith went back to Los Angeles, attended a public high school, and lost interest in the Hare Krishnas.

Today, the young Smith family lives in a small cabin in the Santa Cruz Mountains. There’s an altar with Buddha next to the TV, and one with Krishna in the hall leading to the kitchen.

Despite his good times as a Krishna kid, Smith doesn’t consider himself a believer.

“I’m happy with the way I was raised,” he said. “I really am. It gave me a different way to live my life. But I’m not hung up on any sort of philosophy. There’s some truth in every religion, but I’m nervous about attaching myself to one thing.”

Neither he nor his wife makes a point of trying to visit the Berkeley temple. Nevertheless, it’s a part of their lives.

“You don’t need to be in the movement to maintain a connection to Krishna, or develop a relationship with God,” Briones said. “The goal of life is self-realization. We don’t have to put Radha into an ashram. We can show her what’s available, without forcing dogma on her. She hears me chant the Hare Krishna mantra. It gives me safety and comfort. There’s no harm in it.”

One Response to Growing Up in the Hare Krishnas