George Harrison and the London Hare Krishna devotees recorded the Hare Krishna mantra in 1969 and released it as a “single.” A 45 RPM record. That record rocketed to the top of the music charts worldwide.

In July of 1969 George invited the devotees to make a recording of the Maha Mantra for release as a single. Harrison produced and performed on the song, for which Mukunda provided the musical arrangement and played mridangam, and Yamuna and Shyamsundar served as lead vocalists. Malati, Janaki, Gurudas and others joined in as chorus singers, in addition to playing percussive instruments such as kartals.

Released by Apple Records in August, and credited to Radha Krishna Temple (London), “Hare Krishna Mantra” peaked at number 12 on the UK’s national singles chart and was a commercial success around the world. The devotees twice performed the song on BBC-TV’s Top of the Pops and played a series of concerts across Europe to meet public demand. Mukunda later said: “We went from street people to celebrity status. Overnight.”

Aided by the association with Harrison, the single established the ancient mantra in the cultural mainstream, while also attracting many new members to ISKCON’s centres.

For the growing London temple, this achievement was accompanied by a more tolerant attitude from a previously wary public. In addition, in the Gaudiya Vaishnava faith, the international popularity of the Radha Krishna Temple’s recording was viewed as the fulfillment of a prediction by the Hare Krishna movement’s sixteenth-century avatar, Lord Chaitanya Mahaprabhu, who had written: “One day, the chanting of the holy names of God will be heard in every town and village of the world.” 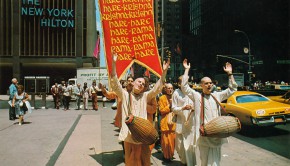 Chant Hare Krishna and be happy! →