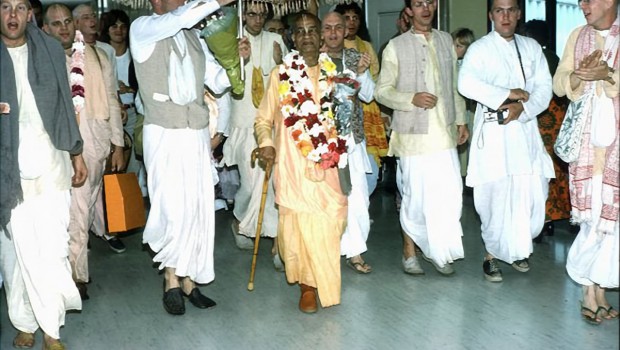 He gradually transformed the hardcore hippies into devotees of Lord Krishna. He did not bring in any designation of caste, creed, religion, sex or faith but said that Krishna consciousness is universal. Thus he formed ISKCON during the July of 1966…

“Swami Prabhupada, one who implanted and nurtured the seeds of Krishna consciousness”

“We find here austerity, learning, art, philosophy, scriptural study, music, an expression of love not curtailed by limited boundaries, but besides all these we find underlying current of Krishna consciousness – which pervades everything – this is ISKCON in a nutshell for you.

Srila Prabhupada is the Founder-acarya for such an institution.

“It was 1965, August 13th, place Calcutta harbour tied to pier was the Jaladuta on board the cargo ship was an unusual passenger, a 70 year old scholarly gentleman and sannyasi. He was all alone. A briefcase, 40/-, and un umbrella were his only possessions. But none had expected that he would grow to great heights and establish Krishna Consciousness all over the world.” (Sudha, 29/8/2002)

“Prabhupada the Ambassador of Bhagavata Tattva To The West”

Srimad AC Bhaktivedanta Swami Prabhupada Founder of ISKCON was born in such an India. He found a new turn in his life after meeting his Guru Sri Bhakti siddhanta Sararswathi. Even at the ripe age of 70, at which time one generally settles and wants to sport with ones grand children, Sri Prabhupada dedicated himself to preach Krishna consciousness & Bhagavata principles. He spread the light of India’s Spiritualism to the west. It was at a time when west was just recouping after great wars, science and technology had shown there darker side, family structure had completely broken apart, many were rendered “homeless,” respect to dharmic principles, to elders was lost.

It was in such scene that Sri Prabhupada entered the west. To smoke ganja and opium was considered right, by the Hippies into such people’s heart Sri Prabhupada implanted the pure theism of Krishna consciousness and brought about a revolution in their lives.…

Prabhupada stayed amidst these hippies who were addicted to illicit sex, intoxication, drugs, many of whom construed all these sinful items as a means of spiritual realization. Prabhupada corrected them and gave them the real medicine of Sankirtana. He encouraged them and did not disregard them.

Prabhupada opposed the idea of free sex and preached that one has to practice regulated householder life in Krishna consciousness. If at all one wants to progress in spiritual life one has give up the hankering for material life.…” (Karmveera Weekly, 1-8, August 2002)