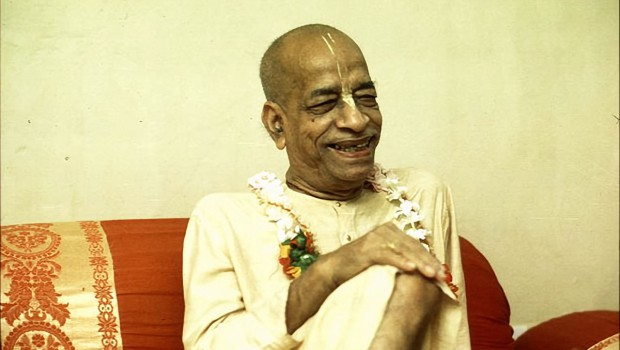 Srila Prabhupada started laughing loudly. ‘Yes’ he said, ‘that is an old phrase they would say in India when someone did something foolish. You’ll be intelligent when you are 80.’

I have been with Srila Prabhupada for about one year now and I have had the good fortune to massage him every day. I think I have become very efficient and expect that today will be another blissful massage. Srila Prabhupada said, “The Manor is wonderful and when the sun is shining there is no place better.” Srila Prabhupada is sitting on a straw mat directly on the highly polished hardwood floor and along side him are two bottles. The large one is filled with mustard seed oil and the small one contains sandalwood oil. The sun’s brilliant rays filter through a series of windows and Srila Prabhupada’s golden complexion is effulgently sun drenched. I am sitting behind His Divine Grace rubbing his head with sandalwood oil for it’s cooling effect. After massaging his head for about 15 minutes, I moved on to massage Srila Prabhupada’s back. Mustard seed oil is used on his body, so I picked up the bottle to put a small amount on my hand.

Many times Srila Prabhupada said, “You can massage my back as hard as you can.” He really meant it. It was truly amazing! I could put all of my weight and strength into massaging his back and continue that way for a half hour or more and he never, ever said, “not so hard.” Sometimes I would deliberately do it harder than normal, thinking there must be a limit to how hard he likes it. I didn’t find such a limit. Srila Prabhupada sat perfectly relaxed during this “passive wrestling” as he called it. He didn’t have to brace himself in order to accept my strength. He just sat there, as if nothing were happening at all. He always enjoyed his massage and today was no different, then I stood up to change positions. As I took a step to the right to massage Srila Prabhupada’s chest, I knocked over the bottle of mustard oil. Over the past year His Divine Grace had warned me many times to always keep the lid on the bottle.

Unfortunately, sometimes I did and sometimes I didn’t. Today I must pay the price. Immediately he yelled, “You fool, you will be intelligent when you are 80. Go get a cup and bring it here.” I ran out of the room, reappearing with a stainless steel katori. Srila Prabhupada said, “All right, put your hand in the oil and then scrape it into the cup.” The two of us sat there until all of the oil from the floor was in the metal cup. “Now use that oil to finish the massage,” he said. Srila Prabhupada never, never wasted anything. More about that in a later pastime.

Now, the atmosphere seemed almost too quiet as I continued to massage Srila Prabhupada. I felt that he was angry because of my foolishness, so I began to think, “What can I say to mitigate my offense?” I mulled over it again and again finally I got up the nerve and blurted out, “Thank you very much Srila Prabhupada, I thought it would take much longer for me to become intelligent.” Srila Prabhupada started laughing loudly. “Yes” he said, “that is an old phrase they would say in India when someone did something foolish. ‘You’ll be intelligent when you are 80.'”