One of the most common issues of arguments of skeptics regarding reincarnation is that the case of children who claims to remember their previous lives comes from cultures or communities whose people believe in reincarnation. Thus they try to rationalize that it is a kind of fantasy which arises from hereditary belief.

The other day in one of the article in Times of India, Sukhwant Singh challenged why so far there are not any case from Moslem community. Thanks to Dr. Satwant Pasricha, Head of Department of Clinical Psycology, NIMHANS, who has found few cases, which occured among Sunni Moslems who, guided by their religious teachings, do not believe in reincarnation. (Some Shiite Moslem communities do endorse the idea of reincarnation)

In India, Dr. Satwant K. Pasricha (along with Dr. Ian Stenenson of University of Virginia) has investigated over 400 cases. Most of these cases occured in the religious communities of Hindus, Sikhs, and Jains, who believe in reincarnation; a few case also occured among Sunni Moslems who do not believe in reincarnation. A change in religion of varying degree has been reported in some of these cases. A change has been considered a minor change if it occured in cases wherein a child claimed to remember the life of a person who belonged to slightly different religion (from Hindu to Jain or Sikh and vice versa). There are also the cases wherein children remembered having belonged to a religion in the previous life that was strkingly different from their present one. For example, a Hindu child who remembers having been a Moslem in the previous life and vice versa is considered as a case of major change in religion.

An analysis of 400 cases  revealed that 26 subjects were Moslems who remembered having been Moslems in the previous life (19 caes) or Hindus who remebered  having been Moslems (7 cases). There were seven cases of Moslems where no change in religion was reported. These case reports have been published in NIMHANS Journal, April 1998 issue, pp 93-100) and also submitted to the Journal of the American Society for Psychical Research for publication, says Dr. Pasricha.

Case of Nasruddin Shah: Nasruddin was born in Allahganj, a town of District Shaharanpur, UP, around April 1962. His parents were Gulsher and Bhaggo Shah. The family were sunni Moslems and belonged to lower socio economic class. Nasruddin began to speak at about the age of one, and he was about 2, when he first mentioned a previous life. He said that he was a Thakur and that his money was buried “under the door”. He gradually gave more details, which included the descriptions of a quarrel that led to his death in the previous life. He said that his own son was among the murderers. One day an elephant came from Phargana (a village about 9-10 kilometers from Allahganj) to Allahganj. Nasruddin said that the elephant was his. Word about Nasruddin’s claims and recognition of the elephant reached Phargana. A son and the widow of one Hardevbaksh Singh, a Thakur, then came to Allahganj to visit Nasruddin. Nasruddin is said to have recognised them by giving their relatioships without mentioning their names.

Nasruddin’s Unusual Behaviour: In addition to his statements about a previous life, Nasruddin displayed certain behaviour that accorded with the behaviour of a Thakur but that was unusual for his poor present circumstances. For example, he refused to eat food on a plate used by someone else and refused to drink from someone else’s glass. This behaviour persisted till the age of four. He also had other behavioural features of “Thakur Snobbery” that lasted till the age of 13-14 years, much beyond his cognitive memories. For example, he would not collect cow dung for fuel, a task readily accepted by his older brother or other children in the community. Nasruddin refused to eat beef from the very young age, although other family members ate it; he did eat mutton. He would not accompany his father to the masque or say Moslem prayers, which the other family members did. Although his parents observerd Ramzan reguraly, Nasaruddin would not join them in fasting; he would sometimes even make fun and ridicule them for fasting.

Nasruddin’s Birthmarks: Nasruddin had prominents birthmarks that corresponded to the wounds inflicted on the body of Hardevbaksh Singh as per the post-mortem report. In the context of the birthmarks, Dr. Ian Stevenson has published a longer report in this case[1].

Case of Nagina: Nagina was born in October 1990 in a town in District Farrukhabad, U.P. Her father, Amaruddin, was a Tonga driver. The family belonged to the sect of Sunni Moslems who did not believe in reincarnation. They were the members of the middle lower socioeconomic class. When Nagina was a little over one year old and before she had acquired speech, she used to try to convey something through gestures. She would make a gesture of striking a match and pointing it to her head. This behaviour started when one of Amaruddin’s aunts, who was visiting them, asked for some oil to massage her head. Nagina brought a bottle with kerosene in it. The aunt said with surprise that she had asked for mustard oil and asked what she would do with kerosene. Nagina then showed her, through the gesture, how she (in the previous life) had poured kerosene on her head and set herself on fire by lighting a match. About the age of three, when Nagina could spoke clearly, she gave more details about a previous life. She said that she was Oma, a teacher, and that she had two dauthers and two sons. Her statements also included the details of how she had a quarrel with her husband and set herself on fire after dowsing herself in kerosene.

A women called Oma devi lived a few yards away from the house of Amaruddin. She was married and had four children: two dauthers and two sons. She was a teacher in a school in District Etah, and her husband sold books and stationary in Mohammadabad. The couple did not get along well. On May 19, 1987 they had a serious quarrel; Oma Devi dowsed herself with kerosene and immolated herself. Her body was charred completely; she was 47 at the time. On hearing about Nagina’s claims Oma Devi’s sons called her to their home. Oma Devi’s younger son expressed reservations about the case but did not deny it completely. Her older son was convinced that Nagina was his mother reborn. His conviction derived from Nagina’s behaviour and her knowledge of certain events in Oma Devi’s life that he believed were not known to outsiders.

Nagina’s Unusual Behaviour: Nagina showed behaviour, which refelected her preoccupation with the mode of death in her claimed previous life. She also showed appropriate behaviour towards Oma Devi’s sons and gave information that was not in the public domain. When Oma Devi’s husband died in April 1996, Nagina became very upset (she was about 5 1/2 years old at that time.)

Nagina’s Birthmarks: Nagina’s parents, and also some other informants, noticed marks suggestive of burns on her body when she was born. On examination in December 1995, two marks were clearly seen on her body. These were hypopigmented areas under Nagina’s chin and on her lower abdomen.

Case of Naresh Kumar: Naresh was born in Fabraury 1981 in the village of Baznagar of District Lucknow, U.P. His parents were Guruprasad and his wife, Bishwana. The family were of middle lower socioeconomic status and were Hindus. About the age of one year, when he started to speak, Naresh used to utter two words, “Kakori” (name of a place) and “kharkhara” (local word for a horse-cart). When he was about four years old, he gave details about a previous life. He said that he was carrying mangoes in his horse-cart when it collided with a vehicle and he died; he also said that he was Moslem and lived in Kakori. Naresh used to talk about a previous life whenever anyone asked him in the village.

A moslem Fakir called Haider Ali used to come to Baznagar every Thursday for alms. After Naresh started walking, he used to follow Haider Ali around the village. Naresh said that Haider Ali was his father and that he wanted to go with him. Everyone in the village called Haider Ali “Baba” but Naresh used to call him, “Abba” (father). Haider Ali lived in Kakori with his family who belonged to the Sunni sect of Islam. He had married twice and had one son from his first marriage, three sons and seven dauthers from his second. Mushir Ali was his oldest son from the secong marriage.

Naresh was so insistent in his demands to be taken to Kakori that Bishwana decided to ask for Haider Ali’s help, as He was a Moslem, and came from Kakori. Haider Ali advised her to take Naresh to a Mazar (grave of a Moslem Saint) so that he would stop talking about the previous life.* Naresh’s parents did take him to Mazar, but this did not help; Naresh continued to talk about the previous life and to insist on going to his previous house. One day he even started going toward the road by himself. Eventually, Guruprasad decided to take Naresh, along with some other people from Baznagar, to Kakori. Naresh is said to have led them to Mushir Ali’s house. On reaching the house, Naresh recongnized several objects that had belonged to Mushir Ali, such as a cap and the contents of Mushir Ali’s suitcase. He was also credited with having correctly recognized members of Mushir Ali’s immediate family, as well as other relatives and friends. Naresh, when questioned, told them about the bank account that the family had when Mushir Ali died. He also mentioned the name of a person who owed some money to Mushir Ali. (The family acknowledged this as true and added that the person in question had returned the money after Mushir Ali’s death.) On the bais of these and other statements Naresh was accepted as Mushir Ali (the son of Haider Ali) reborn.

Mushir Ali had hired a horse-cart and used to take vegetables and fruits to the market; he was the sole breadwinner of the family at the time of his death. On june 30, 1980 in the early hours of the morning, Mushir Ali was taking mangoes to the market in Lucknow in his horse-cart. He had gone a little more than 2 kilometers from Kakori when his cart collided with a tractor; he died almost instantly. He was 25 years old at the time. Mushir Ali’s family were economically no better off than Naresh’s family. Mushir Ali’s other brothers, when Dr. Satwant Pasricha met them in 1988, had grown and had their own embroidery buisness which improved their economic situation to some extent.

Naresh’s Unusual Behaviour: When Naresh was about 2 years old, he would assume the posture of kneeling down and saying Namaz. He would try to do it when he was alone. and would stop when he noticed that others were observing him. Naresh also played at driving a horse-cart. He would tie a rope to a cot and push it and would make sounds as if driving a horse. He also spoke a few words of Urdu.

Naresh’s Birth Defect: Naresh had a birth defect (a depressed area) near the middle of his chest., slightly on the right side. This corresponded to the fracture of the ribs of Mushir Ali that was reported in the post-mortem examination. In this case of the birth defect, Dr. Satwant Pasricha has published a separate paper[2].

2 Responses to Is Reincarnation a Religious Fantasy? 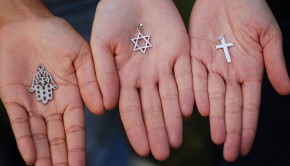