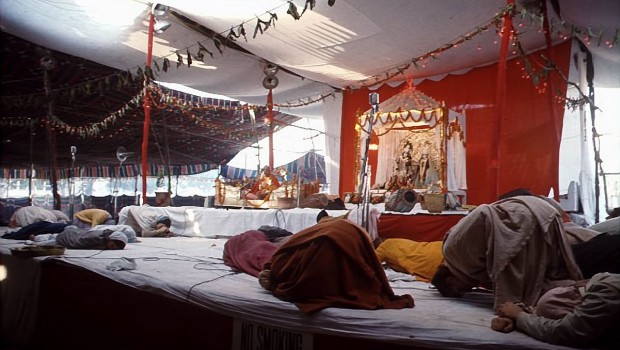 Revered Swami, we are a group of some of Srila Prabhupada’s direct disciples. We pray that you will patiently hear our request. It is our heartfelt wish to always keep Srila Prabhupada in the center of the worldwide mission of Sri Caitanya Mahaprabhu.

Please accept our humble obeisance. All glories to Sri Guru and Sri Gauranga.

Revered Swami, we are a group of some of Srila Prabhupada’s direct disciples. We pray that you will patiently hear our request. It is our heartfelt wish to always keep Srila Prabhupada in the center of the worldwide mission of Sri Caitanya Mahaprabhu. At least in our International Society of Krsna Consciousness, we must follow the precise sadhana and siddhanta Srila Prabhupada taught. For instance, everyday we worship Srila Prabhupada in public temples, often in front of the Deities, with full paraphernalia of arcana puja. In addition to having a huge throne in our temples for Sri Krsna, Srimati Radharani, Lord Sri Caitanya, and Lord Nityananda Prabhu, we have a huge throne for His Divine Grace A.C. Bhaktivedanta Swami Prabhupada. Srila Prabhupada told us to install His murti on the altar next to Sri Sri Radha-Krsna and Sri Sri Gaura-Nitai and also on a separate vyasana throne facing the altar. He let us worship Him and wash His divine Lotus Feet in the temple in front of the Deities on a daily basis. As far as we know, such guru worship is unprecedented in our Vaisnava history and such authorized worship of a devotee is unprecedented anywhere in the world. We feel it is important that all devotees carefully consider what is the position of Srila Prabhupada and why He authorized such worship of the Acarya. We remember always that He single-handedly revived the sankirtana mission of Sri Caitanya Mahaprabhu and established it worldwide.

We hope you will advise wayward disciples of His Divine Grace to return to the shelter of His lotus feet. With heartfelt good wishes we beg you to join us in pushing forward the mission of Srila A.C. Bhaktivedanta Swami Prabhupada, Srila Bhaktisiddhanta Sarasvati Prabhupada and Srila Rupa Goswami Prabhupada, which is one and the same in the real ISKCON. We are certain that Srila Prabhupada would be very happy if you assisted His mission and traveled worldwide, training students how to be better disciples of His Dinve Grace . If you are unable to do this, we hope you will ask your admirers to not advertise you as “Present Acarya of ISKCON”. This is misleading. We humbly suggest that you could rather create your own mission with its own name by creating new disciples, the way Srila Prabhupada and Srila Bhaktisiddhanta Sarasvati have done.

Regarding disciples who reside in hell, we understand that no one who ever sincerely served Srila Prabhupada or His preaching mission will be condemned in hell, although they may experience something like hell if they fall into unregulation, offense, or asat-sanga. Service to great devotees is very powerful, so which disciple of His Divine Grace will be cursed to burn in hell? But Srila Prabhupada Himself indicated that envious disciples who reject the mahabhagavata acarya to accept another guru will be condemned to remain in material existence for many, many lifetimes. Real disciples of His Divine Grace understand that hell means to loose faith in Srila Prabhupada. This is why we think it very important that preachers follow precisely the sadhana Srila Prabhupada prescribed and offer initiations, as representatives of the Acarya, only to those serious students who have successfully followed the sadhana Srila Prabhupada prescribed. This sadhana includes daily worship of the Acarya, His Divine Grace. We feel preachers should always keep the focus on Srila Prabhupada. Learning to hear from Srila Prabhupada and to worship Him as Acarya is a fundamental part of our training in the Hare Krsna Movement. Those who collect cheap followers by offering cheap initiations ultimately cause chaos in human society as we have repeatedly seen in dark histories of failed missions. Srila Prabhupada said, “You can cheat, but it will not be effective.” Sruti smrti puranadi, pancaratriki vidhim vina….

We feel the only formula for maintaining an effective worldwide preaching mission is to keep the Acarya in the center, as Srila Prabhupada stressed. Srila Prabhupada Himself must always remain the acarya-vigraha, who is worshipped by all devotees, and His books and instructions must remain always the fundamental basis of authority in the Krsna consciousness movement. We thank you for your kind consideration in these matters.

Hope this finds you in good health.

DASA (Disciples Associated for Service of the Acarya)

4 Responses to Letter to Narayana Maharaja